Interview: Director Edgar Wright on The Sparks Brothers documentary and if he’d ever make a musical

Dubbed as “your favourite band’s favourite band”, Sparks are the Californian-bred, European-stylised glam rock duo you don’t know you love yet.  As their documentary, The Sparks Brothers (read our review here), continues to screen across select Australian cinemas, Peter Gray caught up with famed director Edgar Wright to discuss the making of the film, why he decided to uncover the hidden secret that is the band, and if he’d ever make a musical.

I went into this film knowing absolutely nothing about Sparks…

It’s a good way to watch it.

Yeah, and I came out wiser and enlightened, so thank you for the introduction.

I think for a lot of people it feels like a secret history of music being opened up to them.  This missing chapter.  One of the things in this documentary is that if you’ve never heard of Sparks, you’ve definitely heard of the people that are influenced by Sparks.

What was your first introduction to them?

The interesting thing about Sparks is that they did have different periods of success, but never in the same country at the same time.  They didn’t take off in the States – they’re from L.A. – with their first two albums, and because they were quite inspired by British music someone at the label suggested they go to the U.K. where it might take off, and it did.  I’m not old enough to remember the 1974 breakthrough, “Kimono My House”, cause I think it came out the month I was born, but later, when I was 5 years old, Sparks were on Top of the Pops and that was my first introduction to pop music.  Sparks were a different proposition to the smily acts they were sandwiched between, like Abba or The Nolan Sisters.  Especially someone that looks like Ron Mael, who’s always looking down the lens at you like you’ve been naughty (laughs).

My parents, knowing that me and my brother liked pop music, had some compilation albums, and one of them had “Beat The Clock” (by Sparks) on it, and I was 5 years old listening to that.  And then after that, and I think this is hard for kids to understand about a world before the internet, for about 20 years they were an ongoing riddle for me because you had to work a lot harder to follow a band.  It’s different if it’s Queen or The Rolling Stones, but with Sparks they’re a bit more elusive.  Some years they’d be trying to break the States and you’d have to depend on what you heard on the radio or saw on TV, what may or may not be in a magazine or a record store.  I don’t recall my hometown in the west country of England ever seeing a Sparks album in my local record shop.  And then I’d go through the library and the one book they’d have on pop music would be “The Guinness Book of Singles”, and you’d look through it and see the Sparks singles that charted in the U.K..

They were an enigma to me.  They’d keep coming back into my life.  Because they’d keep changing their sound, you know I heard the Giorgio Moroder synth version of Sparks, and then as a teenager being really into David Bowie and Queen and T. Rex, I’d hear these Sparks songs on these glam rock compilations, and I’d know their sound.  Then in the mid-90’s, they made a proper comeback in the U.K. with “When Do I Get To Sing My Way” and suddenly they were on the TV a lot, and they were just a riddle to me.  It wasn’t until this century with the release of “Little Beethoven” that the BBC would start playing them a lot, and I remember thinking “Wow, Sparks are still going”.  And not only are they still going, but the material is really good.  A lot of rock bands that go for that long are usually resting on their laurels, slugging out greatest hits, but Sparks are a bit more like David Bowie in that aspect of making the effort to produce new material.  In the last 20 years I went from being a fan to being a full on evangelist.  As a fan I was conflicted between having that secret handshake and keeping them to myself but also wanting them to be so big.  I think that’s what inspired me to make the documentary because more people need to know they are.

I feel like most documentaries about musicians assume the audience has a familiarity with the subject. I appreciated that this film spoke of their lives but was more about the music. Was that the intention to focus more on the work, or that’s just something that organically happened during production?

When I was trying to get the finances to make the documentary, which is MRC, who did Baby Driver with me, those guys aren’t Sparks fans, and part of it is me pitching the idea describing who (Sparks) are.  They loved the idea.  As you said, unlike other documentaries this was pitching the brief between being a celebration and an introduction.  There are music documentaries I’ve seen, and I won’t mention any by name, but I’ve felt that if you didn’t already know the artist, the film isn’t necessarily doing a good job of explaining (them) to the uninitiated.  That’s not a problem you have with The Beatles or a Bob Dylan documentary.  With Sparks, even to their fans, there’s music that people just don’t know about.  You have to colour in all of the different decades.  One of the reasons Ron and Russell were so interested in this was because they had turned down so many offers of people wanting to embalm them as a 1970’s band, and that’s not really true.  The idea of a “golden period” is incorrect for Sparks because their albums of the last 20 years have been just as strong as that of the 70’s.

Was there any album or song that you found a new appreciation for after deep diving through everything?

The album “Angst In My Pants”, which is considered a new wave classic, was their breakthrough album in the states, but did absolutely nothing in the U.K..  Sparks didn’t tour in the U.K. between 1975 and 1994.  They did two TV appearances but other than that were absent as a band.  Some albums that I was only slightly familiar with have since become my favourites, like “Introducing Sparks” and “Angst In My Pants”, these weren’t talked about much in the U.K., so it was a nice thing (for me) to find this new appreciation for their discography. 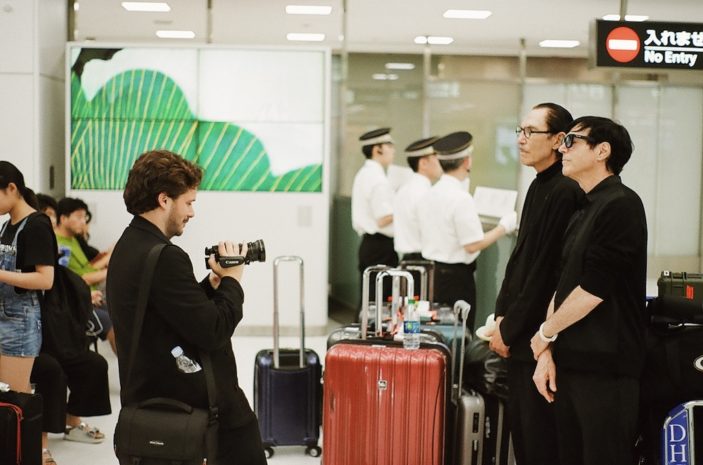 Was there anything that truly surprised from the people you interviewed about Sparks?

One of the things that was really funny to me was how starstruck I was by certain musicians.  It was usually something where people I considered “TV famous” as a kid were in the room, like John Taylor and Nick Rhodes from Duran Duran, and I had those moments of “I can’t believe I’m sitting across from these people”.  One of the best things from one of the interviews, and this will be an extra on the eventual Blu-ray, was Todd Rundgren, already an intimidating interviewee, he had not seen Ron and Russell for 47 years!  He was touring in L.A., he changed his travel plans and stayed an extra day (to do the interview) and I told Ron and Russell that I was interviewing him.  Some fans assume there’s some acrimony between them, and I can’t imagine he (Todd) would do this interview just to say (Ron and Russell) were jerks, so if the interview was going well I told Ron and Russell I would let them know and they could come (to the interview).  I asked Todd on camera how long it had been and what would he say if I told him they were behind that door? He was like “No, fuck off” and I did a full “This Is Your Life” reveal.  It’s going to be on the extras cause it is such a beautiful moment, them being reunited after all this time.

Music is almost a character in itself in your films.  Scott Pilgrim, Baby Driver, I assume Last Night in Soho, which I will refrain from asking about…

I will say it’s very soundtrack heavy.  You’ll get a kick out of the music for that one.

Oh, that trailer is amazing.  Is a musical something you have ever considered?

Yeah.  It’s just finding the right thing.  I’m looking at something right now, actually.  Lots of people who have seen the last few films…they all have those elements.  Weirdly enough, Alfonso Cuarón, yes, name drop alert (laughs), he saw an early cut of Last Night In Soho, which is not a musical, but has lots of musical sequences in it and he just said “Dude, just make a musical already”! I think it might be in my future.  It’s got to be something I get fired up about doing.

The Sparks Brothers is currently screening in select Australian theatres*