It shows how delicious a hotel is when even after a 15 hour flight you crave exploring its ins and outs instead of falling into the comfort of their beds. SIXTY Beverly Hills combines contemporary glamour with Los Angeles exclusivity. Glass, wood and marble detailing meets you as soon as you step into the foyer, and […] 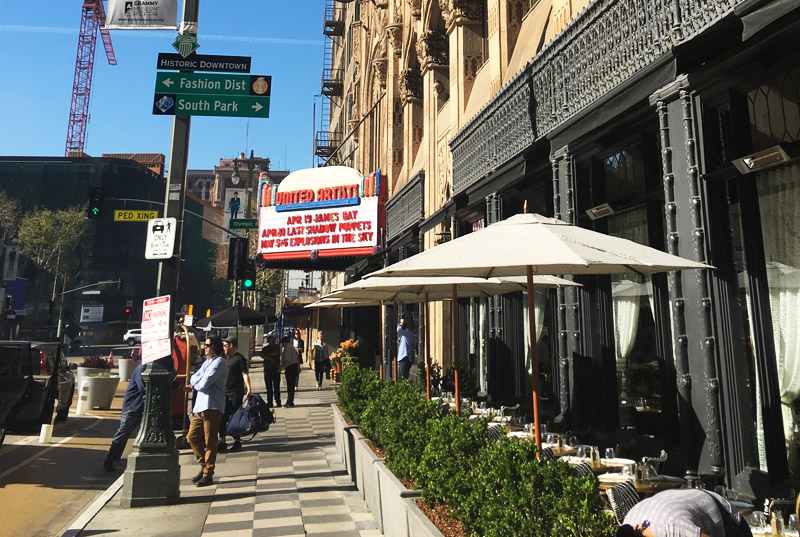 There’s a scene in Woody Allen’s Midnight in Paris, when Gil, played by Owen Wilson, is reminiscing about a time he never lived in; “Imagine this town in the ’20s,” he said of Paris. There was something forlorn about it, a regret that he was living now instead of then. Though Allen portrays this romanticisation […]

Californian based artist Colette Miller was recently in Australia as part of an event to promote travel to Los Angeles, showing off her iconic “Angel Wings” artworks – one of which she painted at a special event in Sydney. While she was there, I spoke to her about the origins of the piece, which she’s now painted […]

Over the last week, we’ve taken you on board Jennifer Quinlin’s journey from Melbourne to London with Air New Zealand atypical route for Australian travellers, via Auckland and Los Angeles. So far she’s taken us through legs one and two of the journey, as well as her experience in transit in Los Angeles. Now today […]

Yesterday we took you to the beaches of Santa Monica, and now today we take you to the other end of the new Expo Line – the revamped, revitalised and culturally vibrant Downtown LA. At the heart of this is the Ace Hotel, an old United Artists Theatre turned Church (“Los Angeles University Cathedral”) turned 13 […]

Travel Diary: Canberra three-piece SAFIA take us on tour in the USA

Canberra three-piece Safia continue to make waves and move to the forefront of Australia’s next biggest musical exports with their blend of indie rock, delicate soul, and various styles of electronica. Last year, the group travelled to the USA for a run of shows that included SXSW, and the trio kept the AU review in the […]

Who says you can’t move forward by looking back? After decades of promises and planning, and years of development and construction, last Friday, the long awaited Expo Line officially launched public service on its expansion from Culver City (which opened in 2012) to the beaches of Santa Monica – connecting the city to Downtown LA via […]

In what will be huge news for people planning on a visit to LA in the coming months, as well as LA locals – Los Angeles Metro’s Expo Line to Santa Monica will officially open this Friday 20th May, connecting Downtown LA to the beachside destination for the first time by rail. Passengers will be able […]

Travel Diary: South Australian band Olivers Army take us to Toronto, Canada and around the USA

AU Abroad is taken to North America with South Australia’s olivers army from the time they played at Canadian Music Week. They share with us their experiences playing shows in Toronto and the USA, plus reflect on overeating Mexican delicacies and visiting the Smorgasburg Markets for some sausages courtesy of the great… well, actually we’ll let you find out for yourself. […]

Before heading to Austin, Texas for SXSW last year, I took a few days to explore Dallas. Flying out from LAX after landing on an early weekday morning from a long-haul flight out of Sydney, I was able to test out Virgin America‘s domestic flight service for the first time! Airline: Virgin America Route: Virgin America […]

Last year, Sunshine Coast’s Selahphonic enjoyed house parties in L.A, had a “rad” three days at Canadian Music Week in Toronto, headed to to Dive Bars and Rehab in San Jose, not to mention big water falls and big bridges… And they treated us all to their experiences in this exclusive Travel Diary. This one’s a […]

Olly goes to the weed shop in Los Angeles

I assumed a medical marijauna prescription was difficult to get in LA, a token gesture to avoid the bad press of incarcerating the cancer ward that had no impact on the availability of weed for everyone else. When a friend that worked in a dispensary told me it was much looser than this in the […]

We continue our Flight Review series, this time back in the USA on our way to Texas for SXSW. Instead of flying directly to Austin, I flew in via San Antonio – about 90 minutes drive from Austin – flying Southwest to get there via an affordable direct flight, here’s my review of their service: […]

Along his journey to Canadian Music Week in Toronto last year – which is just about to return for 2016 – Aussie musician Ash Grunwald encountered electric bicycles, cars, plenty of waves and the contrast of rural Nicaragua and the USA. He’s shared these and more stories with us from his time over the pond… Having a beer […]

Los Angeles is a difficult city to navigate without a car, but it’s something those on a budget need to manage one way or another. Arriving at LAX (Los Angeles International Airport) is the first step in that navigation. How do you get the hell out of there as quickly as humanly possible? Over the […]

On AU Abroad, we bring you a birds eye view of the world of travel. In this article series, we let you in on the best airlines to fly with. We continue things in North America with Air Canada’s direct route from Toronto to Los Angeles, which we took as part of our long journey home […]

As part of our brand new section AU Abroad, we bring you a birds eye view of the world of travel. In this article series, we let you in on the best airlines to fly with. We kick things off in North America with Air Canada’s direct route from Toronto to Los Angeles, which we […]