Earlier this month, I jumped on board Virgin Australia’s Boeing 777 five-times-a-week service from Melbourne to Los Angeles, and was surprised to find a number of enhancements to their Economy service – which mainly floated around the quality of their meal services. Read on to see what a VA trip across the Pacific Ocean is looking like in December 2019.

Breakfast in “The House”

As a Gold Velocity Member, I have access to “The House”, which is Virgin’s re-branding of the Etihad Lounge at Melbourne International Airport. The menu had changed since I was last there, and the result is an impressive mix of options that range an a la carte menu and a buffet – not to mention a stocked bar.

The breakfast menu at The House gives you the option of two poached eggs with a variety of options, including an avocado smash or Benedict, plus omelettes, coconut pancakes and toast. I had the Benedict which was served with ham on a slice of sourdough and was very satisfied with the meal. 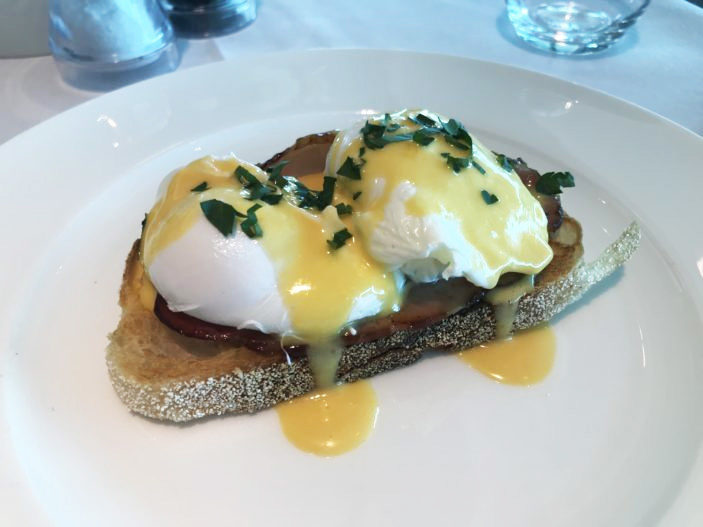 There’s a buffet with add-ons for these dishes like baked beans, mushrooms, potatoes, bacon and sausages, plus fruit juices, fruits, yogurts, pastries, cereals and more. Meanwhile, at the bar you can enjoy a wonderful selection of alcoholic beverages, including some excellent whiskeys. As it hit lunchtime, I tasted a few before I headed for the gate, which wasn’t far from the lounge.

The services out of Melbourne leave later than the earlier morning services out of Sydney. The 1pm departure is a perfect time to hit the skies for the 13-14 hour flight, and it gets you into LAX around 9am; a slightly less crazy time than when the Sydney service gets you in, which is often just after 6am. So it may be the preferred route for some. Boarding was quick and easy – though the jet bridge was pretty clogged once I boarded through the priority lane (another benefit to the Gold Velocity Membership, even when flying coach.

On Board Food & Drink Service

Being an early afternoon flight, with a lengthy flight time, there wasn’t a rush to serve lunch. That said, small bottles of water were distributed shortly after takeoff (as opposed to being left on your seat waiting for your arrival, as they once did – this is a good idea given a lot of passengers bring on their own reusable bottles these days, myself included). They encourage you to refill the bottles when you need water, rather than using cups. They have refilling stations in the economy pantry found about halfway through the cabin. You’ll also find snacks like crisps and other drink options there throughout the flight.

A little less than 2 hours after take off, the first meal service began after the usual distribution of meals for customers with dietary requirements. The differences in its size and presentation were notable: there was more food, and the presentation was unique to the airline. They provided three options for passengers. The first was a rigatoni with pesto and pumpkin, chicken parmigiana with sweet potato and broccoli or the Massaman Beef Curry with rice and Asian greens. It was all presented in a new colour coded cardboard casing that said “Ready for Taste-Off”. It was served with a hearty rice based salad, and, surprisingly, a hot garlic bread roll.

I went for the Chicken Parmigiana and was impressed by the quality of the dish. I also highly recommend cutting off some of the chicken, and putting it in the roll and making yourself a garlic chicken sandwich. 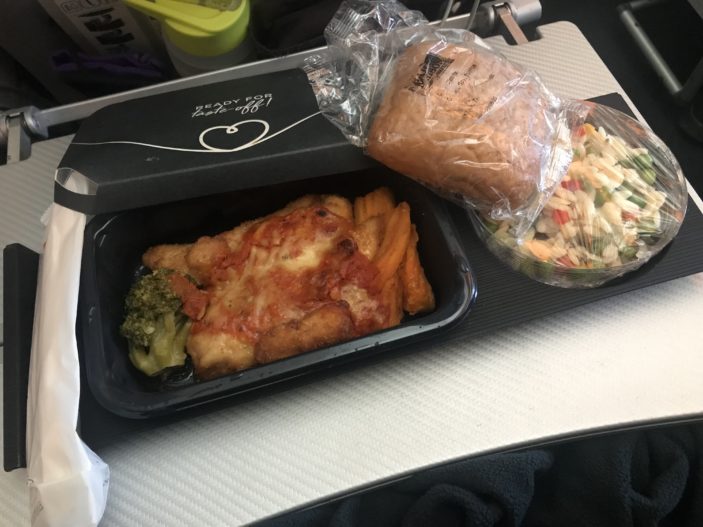 When they last upgraded their meal service on the 777s, most of that attention went to its Premium and Business cabins; in return, the quality and quantity of the food dropped on what their economy passengers were offered. These new meals take things back in the right direction, with high quality, well sized main meals, and a side. The way they are presented as well is quite clever – gone is the massive tray that takes over your whole table; rather, it’s on a wide board that has a space for the side, the main and an inlet for the cutlery as well – which comes with salt and pepper of course.

After the main service, they walked around with dairy free raspberry and coconut Weis bars, which were super tasty. Halfway through the flight a small hot dog (sausage in a roll) and fries were given out. It was surprisingly tasty – though the fries desperately needed some ketchup (pro tip: always have a packet of ketchup on you for a long flight – there’ll always be a meal you can use it on).

Breakfast service started about two hours before landing, with the options coming through the loud speaker as being banana bread, a pepper and cheese omelette or the bacon and egg frittata. The meal was of the same size as the earlier lunch, and came with strawberry Greek yogurt and a raspberry coconut muffin. Again, the quality was exceptional and it was a well sized meal to keep you going well after you left the plane – which is a strong improvement on what they had been serving in recent years.

Every seatback has a touch screen with a plethora of film and TV shows to choose from. They’re really improved their TV offerings over the years – offering entire seasons now rather than just odd episodes. I really dug into The Last Man On Earth on this flight. Perfect show to binge on a long flight.

I’ve mentioned in the past that I’ve always wanted to see some upgrades to the in flight entertainment units on the 777 – namely the ability to flag shows you want to watch, or easily get back to movies you didn’t finish watching before you went to sleep. Well, there’s a seemingly new “my media” button on the service, which flags any content you’ve already started watching and allows you to go back to it. I say “seemingly new” because it’s entirely possible it’s been there for a while and I just haven’t noticed it before. But whatever the case may be, it’s there now, and it was well used during the flight.

I also like when you’re binge-watching a series, a pop up comes up allowing you to jump right to the next episode – though it does sometimes come on a bit early. A small selection of books are available through a built in e-reader too, and there are a few games to play and plenty of music to listen to. And should you need it, Wi-Fi is now available during the flight for a fee.

Service, Comfort and Everything Else…

Beyond the new additions to the service, Virgin Australia remains the truly great full service airline it always has on the trans-Pacific route. Amenities kits are still supplied to all economy guests (with ear plugs, eye masks and a pen provided in a handy reusable bag). The service is impeccable, and the seats are comfortable, with enough leg room to keep the majority of guests satisfied. The fact that economy guests are treated to their own pantry with drinks and snacks during the entire flight definitely makes you feel well looked after and they’re

On arrival at LAX

I’ve been flying into LAX for the better part of the last 25 years, and never before, as far as I know, had I been dropped anywhere but the main Tom Bradley terminal. But on this flight, we were taking to a port out in the middle of nowhere – where you still exit via the jet bridge, but you’re then whisked away in a bus after waiting in a large warehouse of sorts, that takes a lengthy journey around the airport before dropping you at Tom Bradley. I can’t imagine this is a sudden norm for the airline, rather their simple procedure when they have more aircraft arriving than they have gates for – but it was interesting to get delivered to LAX like this. Since we arrived so early though, I made it out of customs with my bag barely 30 minutes after we were supposed to land. In my experience at LAX – and this experience being no exception – everything moves a bit quicker at 9am than it does at 6am.

With the changes to their meals, Virgin have rapidly improved the Economy experience. When there’s 10 hours between main meals, the cuts to the meal sizes a couple of years back had generally meant I sat hungry for a lot of the flight – but in this recent trip I couldn’t have been more satisfied. And beyond that it’s business as usual on board the VA service. There are truly few better ways to travel across the Pacific in Economy Class than with Virgin Australia.

It’s worth noting that while the Melbourne to LAX service (which was re-introduced in 2017) currently runs five times a week, from late July to mid-September 2020, Virgin Australia will be reducing its services on the route from five a week to four a week; while its Brisbane and Sydney services will drop from six to five, and seven to five, respectively. This is due to their 777 fleet undergoing heavy maintenance during this time. They only have five of the aircraft so it’s unsurprising this will have impact. Some of the aircraft have been dating more than others, so it will be interesting to see if they make any upgrades to the cabin during this period.

For tickets and more details about Virgin Australia and all their services, head to virginaustralia.com.