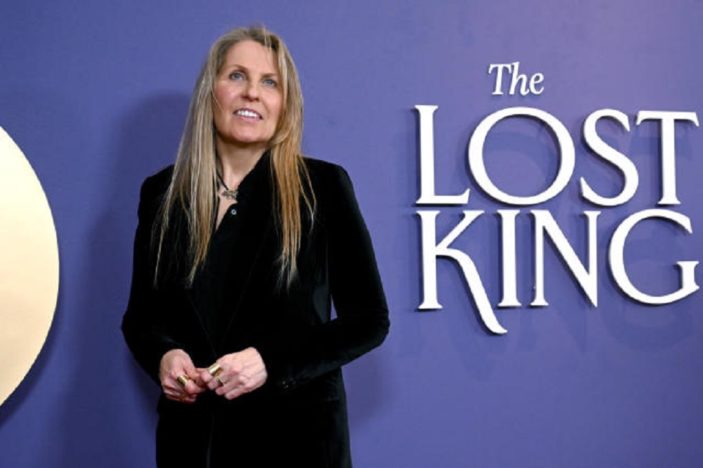 Fascinated by the stories we don’t tell, and why we don’t tell them, Philippa Langley has a passion to tell distinctive and original narratives that challenge our perception of established truths.

In 2012 she led the successful search to locate the grave of King Richard III through her Looking For Richard Project. Philippa conceived, facilitated and commissioned this unique historical investigation. Following seven and a half years of enquiry, she identified the likely location of the church and grave, instructing exhumation of the human remains uncovered in that exact location. Her project marked the first search for the lost grave of an anointed King of England.

Now Philippa’s story is being brought to the forefront of an even larger audience through The Lost King, a new film from writer Steve Coogan and director Stephen Frears that details her determination and unmatched spirit in uncovering Richard III.  As the film arrives in Australian cinemas this Christmas season (you can read our review here), Peter Gray spoke with Philippa about the experience of seeing her story transformed into a film, how she felt about giving her story to someone else, and what it was like to learn she’d be portrayed by Sally Hawkins.

Yours is a story I knew nothing about.  I love going into a film and learning something new.  Did you ever expect such a response to your story?

No, in a word.  Absolutely not.  It’s a story about a medieval king who died over 500 years ago, so I hoped there would be some interest, because I’m a member of the Richard III Society.  (And) I knew they would be interested, but the story just went global.  It went completely global.  I didn’t see that coming.  Not at all.

Were you always interested in Richard III?  In the film it gives the impression that seeing that play was what spurred on this interest for you.

I came really quite late to Richard’s story.  I wrote a book about him first, but I did go and see this one particular Shakespeare play, and it was by Edward Hall’s propeller company in 2011.  That was the performance of Shakespeare’s Richard III that absolutely has stayed with me.  It was how they did it in the olden days (too) where it’s an all male cast, so even the men are playing the women as well.  They went right back to Shakespeare’s first folio, and did it how Shakespeare meant it to be told.  It was phenomenal.

How long ago was it that Steve Coogan showed interest in this story and came to you and told you he was going to write it?  How long has this been in the works?

You know, a long time.  8 years.  Steve first got in touch with me (when) he was coming up to Edinburgh, and he wanted to take me for lunch.  That was the 23rd of April, 2014.  It was St. George’s Day, which is one of Richard’s saints, strangely enough.  So that’s when it started in April 2014.  And it’s been intense.  It’s been eight years of non stop.

(Laughs) At first you think, “Okay.  This is a joke, right?” But (his team) called a couple of times and told me he’ll be in Edinburgh and he wanted to come meet me.  I agreed to meet him, but I assumed he’d be a bit larkey about it.  He’ll bit a bit jokey.  I didn’t think he was going to be right for it.  So I met him and he absolutely blew me away.  He wasn’t laughing about it at all.  he was deadly serious.  He wasn’t interested in cracking jokes, or hoping that I’d like him.  He didn’t care.  At this lunch he just went on and on, because he knew his stuff.  He knew about the story.  He was just firing questions.  Afterwards my friends would ask me what he was like, and I remember the word I used to describe him.  Surprising.  He was totally not the person I thought I was going to meet.  He was incredibly serious and didn’t give a damn if I liked him or not.  He just loved the story.  And I liked that about him.

I imagine it’s quite an emotional experience to essentially hand your story off to someone else.  It must’ve felt good though to know it was in such good care with Steve though?

It’s quite daunting.  I think that’s why I went with Steve (though).  I had a number of people wanting to tell my story, which was another surreal thing, but I knew I could trust (Steve) because he was so passionate about it.  He believed in it so much.  He wanted to see all my original material, read my books, watch the documentary, he spoke to the documentary filmmakers and the Looking for Richard project team.  It was just intense.  They spoke to my family and my sons.  It gave me a lot of comfort because I could trust the process.

How collaborative an effort is it? Are you there helping with the script process and giving notes? Or do you take a step back and see what comes about?

I wanted to step back.  I didn’t want to influence the creative process.  They were the writers (so) all I could do is give them the factual information that I could, and then allow them to the find their way into the story.  I think if Steve was here now with (co-writer) Jeff Pope, they would tell you it took them a long time to find their way into the story.  How do you make archaeology, Shakespeare and a Richard III dig interesting and dramatic? I know they did a lot of drafts before they finally hit on the way to do that.  And that was having (the embodiment) of Richard III in the story itself.

I was going to ask about that narrative device.  Were you excited when you saw that they would frame this quote-unquote “relationship” between Richard III and yourself as a way to humanise the subject even further?

Yeah, I think so. At first, I was a bit shocked.  I wondered if the audience would get it or if it would seem weird.  But they knew I needed a foil, someone to talk to so my journey could be more understood.  I think when (Steve and Jeff) explained it like that to me, and told me of the connection I thought it was really quite clever.

I’m going to assume the Richard III Society has had a nice little bump in prominence ever since?

(Laughs) Oh, yeah.  They’ve had a huge boost to membership.  They’re exhausted because they’re processing so many new members.  What’s really exciting for us (though) is so many of our new members are young people saying they’re interested in history or archaeology.  It’s an exciting time.

And one of those questions it’s always fun to ponder is “If I could ever have a film made about me, who would play me?”  You actually get to answer that and say “Sally Hawkins!”  As with the script process, are you informing her of her performance or you’re letting her find you on her own?

Yeah, absolutely.  I mean, it was COVID, so we were in a very difficult situation.  I asked Steven and Jeff about how Sally wanted to do this.  How could I help? And they told me that she will go off and throw herself into it.  She just cocoons herself in the story.  If she needed anything, she’d shout.  She just deep dived.  They told me she found her way into the story by watching various videos on the internet.  There was one particular interview I did where I spoke about my family and my father, and she said that was where she honed in.  That’s where she got it.

The Lost King is screening in Australian theatres from Boxing Day, December 26th, 2022.