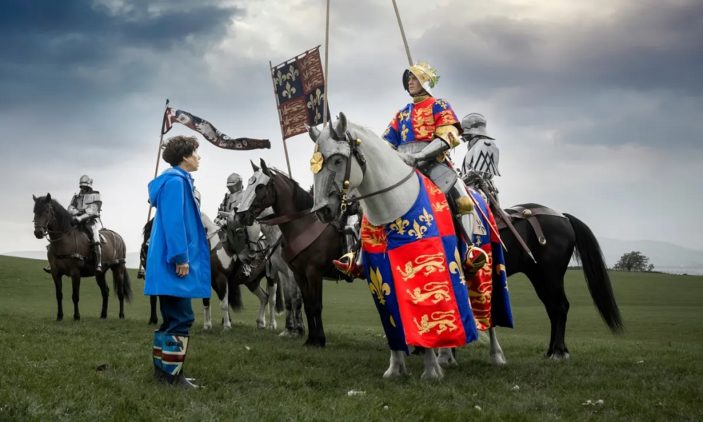 Behind every true story there’s always a slew of accusations as to what is exactly fact and what’s fiction.  In the case of The Lost King, a charming dramedy surrounding everywoman Philippa Langley and her search to find the grave of Richard III, there’s the historians who believes it absolves the king of the supposed murders of his nephews; Leicester University, who say the led the dig; and, of course, Langley, whose historical passion and archaeological instincts drove the dig itself to fruition.

It’s her story that matters here, with director Stephen Frears (Dangerous Liaisons, The Queen) and writers Steve Coogan (Alan Partridge) and Jeff Pope (Philomena) creating a light mystery of sorts within a tale of overcoming adversity, all wrapped up in a feel-good mentality that should speak to the older crowds not interested in talking cats and blue-tinged sea people over the Christmas cinema season.

Langley is here encapsulated by the tender Sally Hawkins, who leads with a determination and a stubbornness that, understandably, makes way for her eventual grit in uncovering Richard III.  Unhappy with her career and somewhat estranged from her ex-husband, John (Coogan), Philippa is searching for a meaning in her life, and unexpectedly finds it in a performance of William Shakespeare’s Richard III.  This spurs on an obsession with the character himself, Philippa finding a connection – perhaps due to him being reviled for his humpback, which she relates to her own battling of ME (Chronic fatigue syndrome) – that leads her on a deep dive.

Said deep dive brings her to the awareness of the Richard III Society, a collection of left-of-centre characters who all hone a certain fanaticness when it comes to the king himself.  Though these characters are mostly played for laughs, Coogan and Pope still treat them with respect, and when it’s revealed that Richard III’s resting place is unknown, Philippa finds her purpose in uncovering him and settling an ages-old mystery.

Due to Philippa not having an academic or archaeological background, it makes sense that she was consistently met with doubt and dismission when she raised the idea of a dig.  And it wasn’t just the dig itself, it was that she was drawn to a carpark and asked that this very public, council-approved slice of land be interrupted for the sake of a hunch that she truly couldn’t explain beyond believing it herself.  Whilst Philippa’s conviction is never questioned from an audience point of view – it supremely helps that Hawkins has a distinct likeability about her – Coogan and Pope help proceedings along with a certain plot device that assists in exposition without entirely batting us over the head with it; the actor playing Richard III in the play, Harry Lloyd, embodies the physical manifestation of the Richard Philippa sees in her head and has conversations with, often assuring her and guiding her towards the dig’s fruition.

Whilst the film itself may not be as memorable as the story its telling and the woman behind it, Frears, Coogan and Pope have still created something fascinating and worthy of being digested as a counterbalance to blockbusters that honour effects over narrative.  A charming, simple underdog tale of a woman finally finding her voice and making it reverberate on a global scale, The Lost King is someone audiences will hopefully enjoy uncovering.

The Lost King is screening in Australian theatres from Boxing Day, December 26th, 2022.