Film Review: Avatar: The Way of Water is a visual, immersive spectacle that lacks a certain narrative thrill 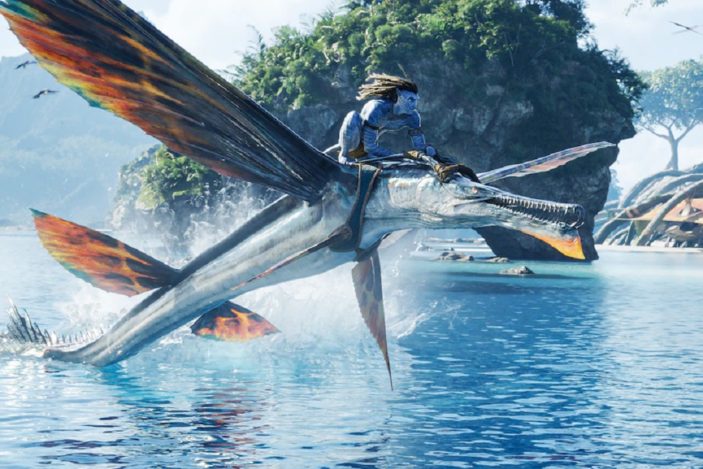 Whilst there are those that will sternly attest that 2009’s Avatar was an impactful piece of cinema with a lasting relevance, there’s the equally valid counterpoint that beyond the special effects and its introductory lesson to the 3D technique it’s a movie that doesn’t have the emotional weight it so wants to believe it has.  Take away those effects and is there much of a film worth remembering?

It’s often been a criticism of James Cameron‘s undeniably gorgeously-rendered actioner, and, for better or worse, the long-awaited sequel – Avatar: The Way of Water – very much plays by the same rule book.  The majority of the characters are cartoonish in nature (and not just because they are heavily animated) and the dialogue leaves much to be desired, but, again, Cameron’s eye for visual sumptuousness is unmatched; and yes, this will be a necessary 3D viewing experience.

Playing out under the assumption that you’ve seen the first Avatar – and with a $2.9 billion gross it’s safe to say there aren’t many who haven’t seen it – The Way of Water has no “previously on” exposition to catch any audience members up.  The closest we get is the monotone vocals of Sam Worthington‘s voice-over, informing us that his former-human Jake Sully has taken easily to his life as a Na’Vi, building a home with Neytiri (Zoe Saldana) and their quartet of children, including Kiri, born from Sigourney Weaver‘s human Dr. Grace, meaning, yes, Weaver is motion-capturing as a developing teen in a rather odd performance that doesn’t always quite sit right.

Naturally, peace can’t be maintained for Jake and his clan (where’s the fun in a movie with no discord?), and soon the exoplanetary moon of Pandora comes under attack from “the sky people”, led by General Frances (Edie Falco, leaning heavily into her archetypical character frame) and Colonel Quaritch (Stephen Lang, evidently aware of what type of movie he’s making).  Quaritch, who was killed at the hands of Jake in the first film, has had his memories and consciousness implanted into an Avatar design and sees the eradication of Jake and the Na’Vi as a two-birds-one-stone situation; revenge and the desire to claim Pandora as their own in the wake of the Earth expiring going hand-in-hand.

This particular strand of conflict ultimately means The Way of Water doesn’t do much to differentiate itself from its predecessor as it can’t help but feel like it goes back to square one in some regards.  At least narratively.  Where the film opts to wow – or, if we’re being honest, fools its audience into forgetting the basicness of its plot line – is the move from the forestry of Pandora to its ocean line.  Realising that if he stays where he has been his family and people will perish, Jake moves them to a lush oceanic commune – the Metkayina – where their leader, Tonowari (Cliff Curtis), and his wife (Kate Winslet‘s Ronal), begrudgingly welcome them.

It’s here that Cameron can flex his technological and visual muscle.  The Metkayinan surroundings are undeniably gorgeous to look at, with these underwater sequences clearly being sold as the film’s biggest draw.  Gorgeous as it is though, and the script, which Cameron co-wrote with Rick Jaffa (Jurassic World) and Amanda Silver (Mulan), briefly flirts with interesting aspects around tribal connection and our relationship to the environment, it can’t help but also feel incredibly self-indulgent.  Whilst Jake’s son, Lo’ak (Britain Dalton), gets his own story arc as he identifies with an outcast whale-like creature deep in the outskirts of the ocean, it also proves the definition of a “filler” storyline; the creature does come into play towards the climactic hour of action and destruction, but so many minutes – and this film clocks in at 193 of them – devoted to the lad swimming and bonding with the animal add zero to proceedings.

On the mention of that final hour, in true Cameron style it’s where it feels most exciting.  Sure, much of the action taking place is hedonistic (what action movie isn’t though?), but it’s difficult to deny how assured the director feels navigating as such.  The film’s emotionality is also at its strongest here through Neytiri’s reaction to the humans harming her children, and when she switches into “mamma bear” mode and precisely, brutally slays anyone in her path, it’s truly rousing to watch.  On the opposite side of the coin, we’re also subjected to the film’s most annoying character here in Captain Mick (Brendan Cowell), an exaggerated Australian who lays the ocka on extra thick and highlights just how simplistic (and, dare I say, pedestrian) Cameron’s script can be at times.

It’s difficult to not see how much The Way of Water recycles what came before in the original Avatar;  there’s a threat from the sky people that Jake has to warn the Na’Vi about, and it all comes to a head in an overblown battle sequence.  Perhaps it’s intentional on Cameron’s part though, knowing audiences – the very ones so enamoured with what he created 13 years ago – will easily surrender again to the escape-worthy surroundings of Pandora and not prove overly critical in the process.  I do believe The Way of Water improves on the first film, and as an immersive experience it absolutely has to be consumed on the biggest screen possible, but we aren’t really being taken to anywhere of untapped dramatic value.  Instead, it’s a beautifully encapsulated detour towards a third film that will hopefully spend just as much time on its narrative as it does on its unmatched aesthetics.

Avatar: The Way of Water is screening in Australian theatres from December 15th, 2022.