Can you visit Universal Studios Hollywood and Disneyland California in the same day? 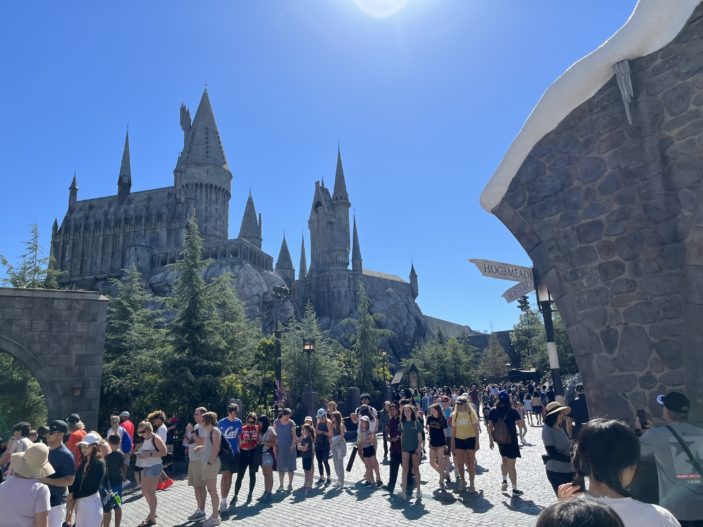 Earlier this year, I was lucky enough to have a day off in Los Angeles. It had been more than two years since I’d last been there – pandemic and all – and I had a lot of time to make up for. So, being the theme park enthusiast I am, I tried to (for the first time ever) visit both Universal Studios Hollywood and the two Disneyland parks in California – the OG Disneyland, and the adjacent California Adventure – in the same day.

Could it be done?

It turns out that not only can it be done, but you may not even have to miss out on any rides in doing so. Though you may have to pass on some attractions – like live shows, tours or more elaborate dining options.

Honestly, that depends on whether you’re a first time visitor to the park or not. I will say from the outset – if you have never been before, haven’t been since you were really young, or are bringing your kids, do not do this.

The level of detail in all three parks make them places to be savoured and explored. And you’re never dragging a whole family along for a ridiculous escapade like this. But if you have been before, and many times like me, then this could just be something you want to try.

I started the day at Universal Studios Hollywood, arriving just as the gates opened at 9am (hours are different every day, so check HERE to see the times for your visit). This was the middle of the week but I was still far from the only one who arrived early; the lines were long to get through security, and again to get through the gates – but thanks to the Express Pass ticket upgrade, which costs about $70 more than normal tickets, they were the only substantial queues I would see that day.

If you’re going to attempt what I did, then unless it’s a particularly quiet day, you will likely need to make sure you do the upgrade, which gives you access to an express queue for every ride and just about every show and attraction in the park.

Back in the day, these were the “single rider” queues, but now have been monetised for the “Express” add on. The passes only give you access to the express queue once per ride, and every rider needs to have upgraded their ticket – which ensures said express lines remain true to their name. It’s great value if you can afford it, and particularly if you don’t have all day to wait around in queues. 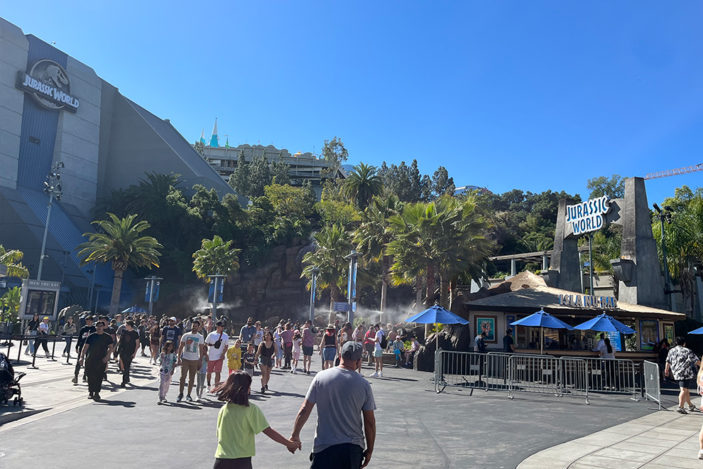 I was able to ride every open ride in the park in under two hours. This included a new family ride for The Secret Life of Pets; the recently upgraded Jurassic World water ride (pictured above); all the adventure of The Wizarding World of Harry Potter (which contains the indoor attraction Harry Potter and the Forbidden Journey and the outdoor roller coaster Flight of the Hippogriff); the technical marvel that is the Transformers Ride; a whole world and ride dedicated to The Simpsons; and The Mummy indoor roller coaster.

Now, once Super Nintendo World opens in early 2023, the speed at which I traversed through the park may be delayed by a need to fully explore the intricate details, and the interactivity of the new area. But until then, it’s not difficult to rush through the park, if you absolutely have to!

I did have to miss the iconic Studio Tour, given the fact that it adds another hour to the experience, and I’d done it so many times before. But if you haven’t done it before, it’s a requisite of attendance – and you could still feasibly achieve the day with it on your itinerary. The set of Jordan Peele’s Nope is a recent permanent addition to the tour, and they have recently started upgrading their fleet of trams to electric. You may have also enjoyed an experience like the “Terror Tram” as part of the Halloween Horror Nights.

Nor will you have time to see any of the shows – and honestly no visit is complete without seeing the Waterworld spectacular, which incredibly has been enjoying performances in Hollywood since 1995, and is now replicated in Japan, Singapore and the recently opened Universal Studios Beijing. But if you’ve seen it before, then it’s easier to skip.

So, it was now just before Noon, and time to head onto Disneyland, in Anaheim. If you have a car, driving between the two parks is easy enough – give yourself at least an hour (though without traffic it would take 35 minutes – but that’s never going to happen in daylight hours in LA). 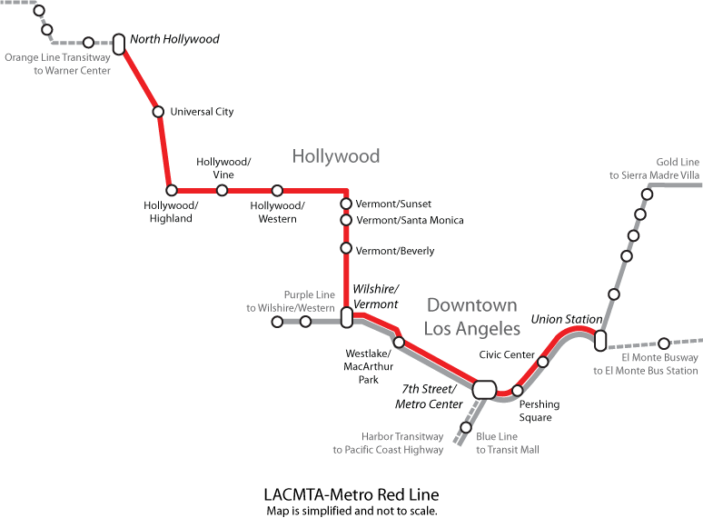 If you’re not driving, you can walk down to the nearby Red Line Metro Universal City train station and skip all the traffic to Union Station. From there, you can get a train to Anaheim – though these are few and far between. It actually works out to be reasonably affordable to get an Uber or Lyft all the way from Union Station to the park. And thanks to the traffic avoided by the train, it worked out to be a quicker way to get between the parks than driving alone would have been – taking me an hour all up. 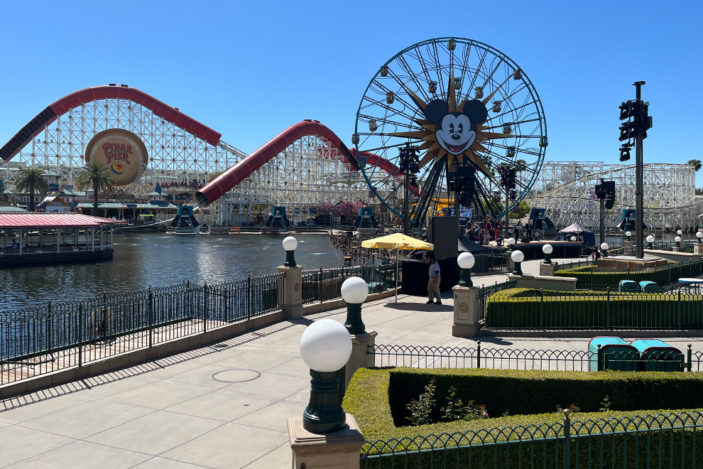 Upgrading to the Genie+ pass, which is Disney’s “Express Pass” equivalent, for $20, I started hitting all the best rides in the park. The Incredicoaster, the impressive Cars ride, the new Spider-Man ride, the old Tower of Terror (now Guardians of the Galaxy: Mission Breakout!), and many others. By using the Disneyland app I was able to get myself into the Lightning Lanes of some rides, the Single Rider queues of others, and line up with everyone else on the rest, and systematically conquer the park in the 4 hours I was able to spend there.

Things were much less rushed once I got over to Disneyland, and as families started to leave later in the night, or be distracted by the parades and fireworks, I had no issues jumping on just about every ride in the park I wanted to – including the incredible Rise of the Resistance – easily the best ride in the OG park, and the one usually with the longest queue (you need to pay a separate fee to join the lightning lane there). 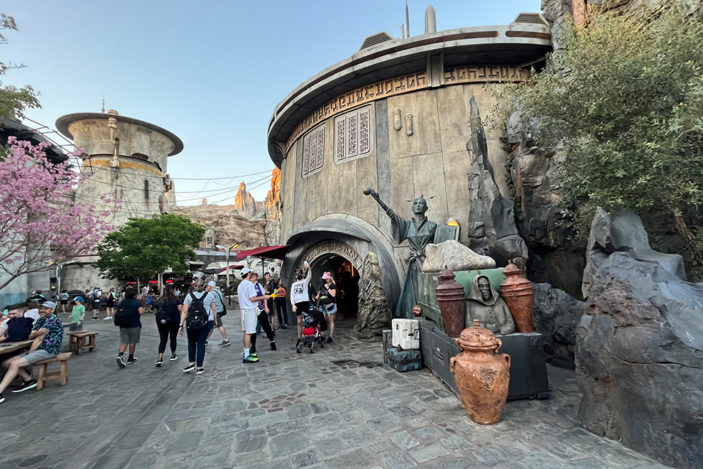 I was even able to head out of the park and into Downtown Disney for dinner (a strip of restaurant and entertainment options that sit alongside the two parks), before heading back in to fit in a few more rides, including Space Mountain, a sentimental favourite.

As fireworks were sent off over Mickey’s castle, and the clock moved ever closer to midnight, I considered lining up for another attraction, but instead found myself exploring some of the hidden secrets of Main Street U.S.A., and seeing classic attractions in that area of the park, like Great Moments with Mr. Lincoln, which first premiered at the 1964 World’s Fair in New York City. I was as surprised as you are that I ended the day with time to kill, and having ridden just about every ride I wanted to. And in spite of my umpteenth visits to this particular park over the years, I had never had the opportunity to see some of these OG treats.

If you have never visited any of these parks, reducing your experiences to quicker visits like this is not recommended. The detail in these parks, as well as the rides and experiences themselves, deserve as much time as you can give them. And while I rode every ride I wanted to, the experience you may want to have at the parks are not necessarily inclusive of the same list. I skipped a lot of well trodden adventures, shows and experiences.

But for those who have limited time and want to fit in as much fun into one day as possible, it’s totally doable. And even better for those of you, like myself, who have been lucky enough to visit these parks before.

The author visited as a guest of each park. All photos by the author, Metro line map taken from LACMTA.