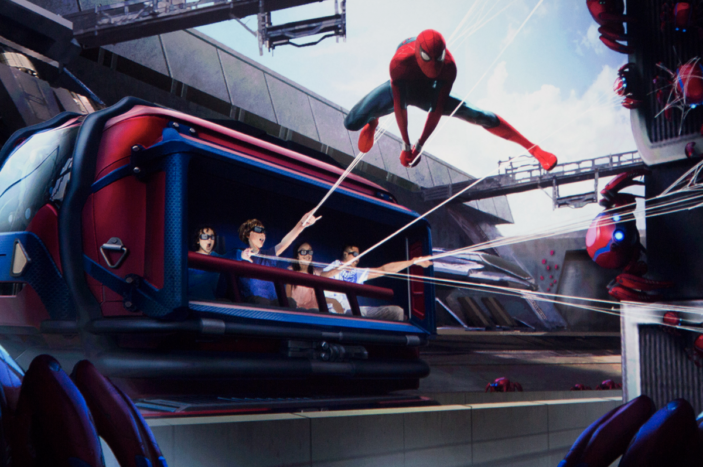 I’ve been lucky enough to be a regular visitor at Disneyland, California, since I was a little kid. For me, the joy of attending it has never waivered; it is the “Happiest Place on Earth” after all, so even without the nostalgia, it’s a place that guarantees a pretty magical time. But for many years, it felt like both the OG Disney Park and its second gate California Adventure, weren’t delivering on the promise they set themselves in the mid-90s.

When the Indiana Jones Adventure ride was introduced in Anaheim in 1995, after some 7 years of development, Disney set the intention that their newest attractions would break new ground in terms of scale and technology. Even the ride queue was something to be marveled at; with a story to be told, codes to decode (which you can now do through the app, but used to require a special card you’d carry with you), ropes and poles to interact with and plenty of secrets to discover. And with good reason – this instantly became the hottest attraction in the park, and queues could stretch for hours. And rarely had so much attention been given to that side of the experience.

Such a moment followed in the tradition of a park that would invent new technologies for its rides that would ripple through the amusement park industry. But that path was halted – at least for the West Coast parks – as focus moved to a second park, first as an EPCOT for the West Coast, into what became a budget conscious California Adventure. While the second gate eventually made good on its own promise of unique experiences (particularly with their expansive Cars attraction Radiator Springs Racers that opened in 2012), aside from the Soarin’ Over California ride, the park launched, arguably, with little of the sort of innovation that had been teased with EPCOT West and indeed, the Indiana Jones ride.

It wouldn’t be for another 24 years that the original Disney park would see that same level of ride innovation, with the launch of their Star Wars themed land Galaxy’s Edge, and the Millennium Falcon: Smugglers Run, a six person interactive experience aboard a replica of the Falcon, amidst the park’s first new land since Mickey’s Toontown in 1993 (which, sidenote, is currently undergoing a long overdue renovation of its own).

It was part video game, part ride, part immersive experience, and brought the same sort of “wow” and excitement factor that Jones had inspired so many years earlier. I mean, you actually get to fly it. It’s a rush – and with every passenger playing a different “role”, it demands replay. No two rides will ever be the same, especially if you have a pilot who can’t steer so save their life (which may or may not have happened to me in my most recent visit).

The launch of this ride was part of a one-two punch, with a sister ride in Galaxy’s Edge opening 7 months later, at the start of 2020 – Rise of the Resistance. The delay was as technical as it was strategic – the sheer technical complexity of the ride meant it couldn’t be launched simultaneously.

And sure enough, it lived up to its promise. Operating on millions upon millions of lines of code, Rise of the Resistance is the most impressive dark ride I’ve ever been on. Borrowing from the innovations of rides like Pooh’s Hunny Hunt (Tokyo Disneyland, 2000) and The Twilight Zone’s Tower of Terror (Orlando’s Hollywood Studios, 1994); with a little magic from the cast, and the understanding that by making the queue an experience and a story in itself – something that dates back to Haunted Mansion (Disneyland, 1969) – the guest experience is going to be enhanced, and the ability to tell a more immersive story is possible. The experience will bring awe to even the most pessimistic of adults, as nothing to this scale has ever been produced, and you genuinely feel a part of an easy-to-follow story, and the action as you go through the ride, in a way that I’ve never seen an attraction achieve so successfully.

All the while that this innovation, interactivity and immersion was being brought to its new Star Wars land, this was also being implemented elsewhere in the park, and across the street at California Adventure. At Disneyland, in 2013, the existing Star Wars ride Star Tours was given an overhaul off the back of Disney’s acquisition of the property, and the launch of the new trilogy. The new version randomised the destinations that your ship visited, from all films new and old, making for 700 (yes, you read that right) variations of the experience. 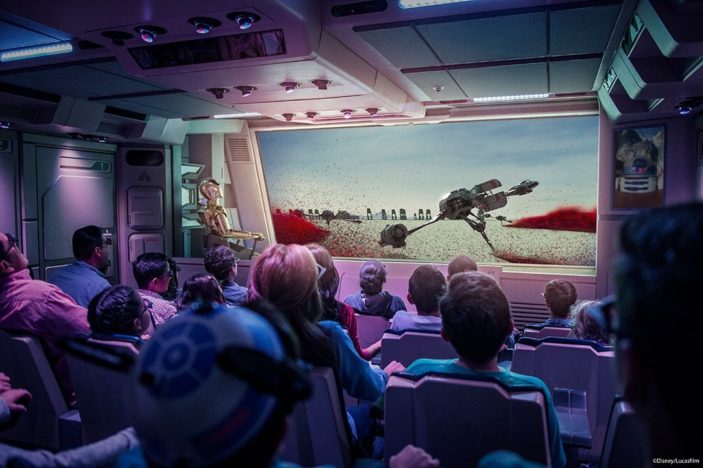 This was a break from the traditions of Disneyland, which took pride in the experience being so remarkable, that you’d return to the ride every visit, even though you already knew how it all went. Now, they wanted guests to have the opportunity of a different experience with every ride.

Meanwhile, at California Adventure, the 2015 re-skin of the incredible Twilight Zone: Tower of Terror drop ride, was to now feature the Guardians of the Galaxy, be called Mission: BREAKOUT!, and utilise the same randomised video concept, with six different drop sequences, each with its own soundtrack and visuals. 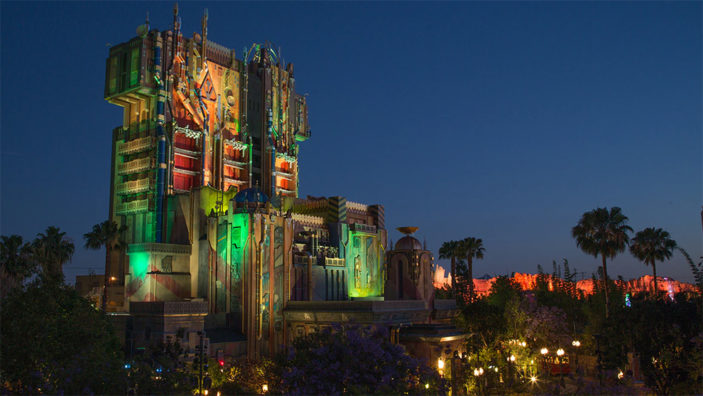 Also at that park, the enduring popularity of Toy Story Midway Mania (2008) – a dark ride that takes you through a number of video screens that you interact with by way of a toy slingshot, itself a technical evolution to Disneyland’s Buzz Lightyear Astro Blasters (2005) – seemed to inspire the newest attraction in the new Avengers Campus, WEB SLINGERS: A Spider-Man Adventure, which opened last year. Only this time, no toy prop was needed; new technology allowed guests to sling webs from their own hands to accumulate points. Here, the reply value isn’t so much in a new experience each time, but as with the Toy Story games, to get a better score every time you ride it.

This renewed focus across the parks on innovative technology, immersive experiences and interactive experiences has helped ensure that the parks have entered the new decade at top of their class, just as their competition – in particular Universal Studios and its new Harry Potter and Super Nintendo worlds in Japan and the US – started to lap at their heels.

Here’s hoping this is a trend that continues; not to the extent that they start to overhaul every existing rides, mind – they were never wrong in the assumption that guests would want to ride their attractions time and time again no matter what – but that they continue to introduce new rides that impress on the West Coast. Though we certainly don’t expect another Rise of the Resistance anytime soon, let’s just hope it’s not another 25 years before we see something of that scale again at the classic Anaheim park.

If you ever wonder about any of the enduring legacy of this park and its rides, just remember that to this day, Indiana Jones Adventure remains one of the most popular rides at Disneyland, with some of the longest wait times. When I was there recently, it was one of the first to run out of “Lightning Lane” passes for the day – a premium express queue feature for guests who paid the $20 extra for “Genie+”. And it remains a thrilling ride that they have updated over the years with new effects to ensure it’s up to the standards of the newer rides. So you only expect the same for the newest additions.

And believe me when I say, Rise of the Resistance is worth the price of admission alone.

It’s an easy trip to Disneyland from Los Angeles Airport (LAX) or the nearby Orange County Airport (SNA), by car, Uber/Lyft or public transport.

A train to Anaheim can be caught from LA’s Union Station, and the Flyaway shuttle bus from LAX will take you straight to Union Station. There are also some Disneyland Resort shuttle buses you can look into.

If flying from Australia, Delta, Qantas, United and American Airlines all offer direct flights to Los Angeles from the East Coast of Australia. Hawaiian Airlines will also get you there via Honolulu, and Fiji Airlines via Nadi.

The author visited as a guest of the park. All photos & images provided by Disney Parks.