Is Genie+ worth it at Disneyland & California Adventure? And how do the Lightning Lanes work? 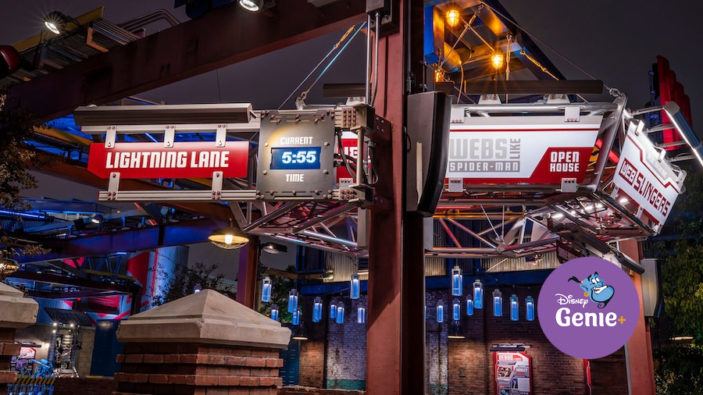 In December 2021, after more than 20 years of the “FastPass” system (which this feature length documentary will tell you all about so I don’t have to), Disneyland  scraped their relatively groundbreaking – if imperfect – queue cutting system, in favour of “Genie+”.

The system was to take advantage of new digital technologies and allow ride-goers to pre-book express entry (now called a “Lightning Lane”) rides before they arrived, as well as request new “Lightning Lane” entry passes while in the park.

The catch: it would no longer be included with the price of admission, putting it more in line with other park’s models – like Universal’s Express Pass, which puts a premium cost on a ticket that lets you skip queues (in Universal Hollywood’s case, this seems to typically takes people down what used to be the single rider queues).

Understandably, this worried parkgoers, who were already seeing substantial (and fluctuating) price rises as a result of the introduction of expensive new Star Wars and Avengers lands, in Disneyland and California Adventure respectively.

So, cost of the ticket itself aside – how does the new Genie+ system work, and is the extra cost worthwhile?

The Genie+ service will only cost you an extra $20 – far less than Universal’s Express Pass – and it’s something you can purchase yourself once you link your ticket up to the Disneyland app in your phone.

Unlike the FastPass system, where you collected physical tickets at the entry zone of a ride to return at a later time to ride with a reduced queue, here the service will only really work if you have a smartphone. While the assumption is that most people do these days, it does present an immediate barrier for access, that the FastPass system did not.

The add on service gives you access to the Lightning Lanes, which replace the old FastPass queues, and ensures you have a shorter journey to enjoy the ride on arrival. You can only book one ride at a time – and then you can’t book another one until you’ve ridden that ride (or until two hours has passed, whichever is sooner), so there’s a need to be strategic about your choices. Many rides still have single rider queues, like the Incredicoaster at California Adventure, so mixing up Lightning Lanes and single rider queues may definitely be the way to go.

As the park gets closer to closing – 2 1/2 hours or so away – you’ll start to notice lane passes disappearing, so it’s important you don’t wait to long to get yours. I arrived at California Adventure at 1pm, and only got to get one lightning lane in before going over to Disneyland and booking rides there. And yes – the $20 covers as many parks as you have a pass to attend!

That $20 doesn’t give you access to all the rides, sadly. One of the downsides of the system is that the most popular rides in the parks – in California Adventure, the new Spider-Man ride and what is arguably the best ride in the park, the Cars Radiator Springs Racers and in Disneyland, Star Wars: Rise of the Resistance – will cost you an extra $15, per ride, on top of that. This is where the system falls flat in my opinion, because it puts a false economy on their attractions.

Take the new Star Wars ride, the incredible Rise of the Resistance – easily the most impressive ride that Disneyland has ever produced. It’s impressive because of its complexities, and as a result it often breaks down (as is common amongst the park’s best rides, to be fair). While I was there, it went down multiple times during the day. By the time it went back up, everyone who had the extra $15 pass ran over to ride it, and the app quickly took the wait times from 30 minutes to 3+ hours.

By the time the app had inflated the wait time to some 3+ hours, people stopped showing up to ride it in the general queue. But here’s the remarkable thing – when I decided to bite the bullet and line up for the ride, I actually didn’t have any wait time at all. Had I paid the $15, however, I would have ended up in a queue for an hour with all those who had spent that money, while the app continued showing the 3+ hour wait time to both dissuade others to come, and also to give those that paid $15 a feeling that they were getting value for money – which at that point, they weren’t.

While I’m sure this isn’t a regular occurrence, it shows how easily the premium add-on system can fall apart, and that it’s probably not necessary in the first place.

So, by jumping between Lightning Lanes, as permitted, and single rider queues, where they existed, and then sucking it up for the newer “premium” attractions (and getting a bit of luck on that Star Wars ride), I got to jump on just about every ride I wanted to in the park, which certainly ensured that the $20 I’d spent did not go to waste. Had I not spent it – and been glued to my phone for much of my time there – I definitely wouldn’t have made it on as many attractions as I did.

But the real value in the pass is found in the other benefit: unlimited digital photos. What would normally have cost $14.99 for just the one photo, is now inclusive in a Genie+ pass, and you can get as many ride & attraction photos as you can handle. From a picture out the front of Disney Castle, to your face just before it drops out of view in the Guardians of the Galaxy drop ride, you’re able to put the code into the Disneyland app, and access hi-resolution copies of all the photos. As someone who always wanted to get photos from rides, but couldn’t justify the cost, this alone makes the Genie+ add on a must purchase for the Disneyland experience; so long as you have a smartphone, of course.

Honestly, for the photos alone the pass pays for itself; which is clever on their behalf, because I feel like if it was just the Lightning Lane access, you mightn’t be as satisfied. The add on costs for some of the most popular rides is the only thing I don’t like about the service – it led to some disingenuous timings which seemed to be implemented for the sole duty of giving their premium paying customers the illusion of a good deal.

But on the whole, the $20 is money well spent – and I might add, the app works really well. Even if you don’t pay for the “Genie+” system, it’s very clever at helping you suggest what to ride and when, as well as giving you lots of fun things to do while you wait in line!

It’s an easy trip to Disneyland from Los Angeles Airport (LAX) or the nearby Orange County Airport (SNA), by car, Uber/Lyft or public transport.

A train to Anaheim can be caught from LA’s Union Station, and the Flyaway shuttle bus from LAX will take you straight to Union Station. There are also some Disneyland Resort shuttle buses you can look into.

If flying from Australia, Delta, Qantas, United and American Airlines all offer direct flights to Los Angeles from the East Coast of Australia. Hawaiian Airlines will also get you there via Honolulu, and Fiji Airlines via Nadi.

The author visited as a guest of the park, and tried out Genie+ at his own expense.