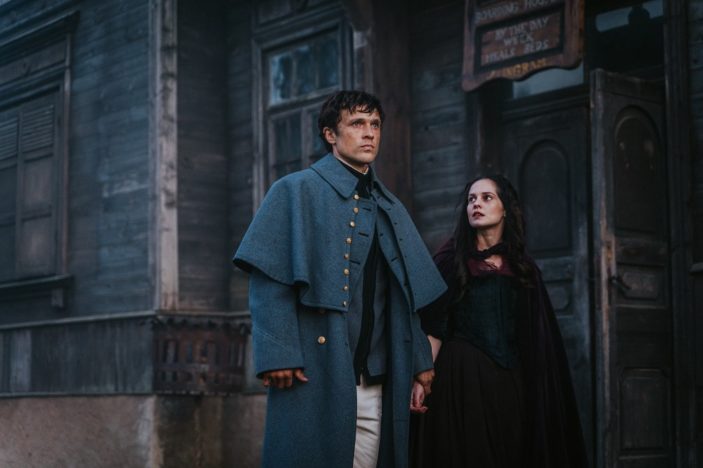 There’s always a certain joy in seeing someone you know personally excel in their chosen field of expertise. And for Peter Gray it was chatting with Queensland actress (and long-historied friend) Melanie Zanetti in conjunction with the release of Raven’s Hollow.

After catching up and filling more than a few interview minutes on celebrating each other’s victories, Peter spoke with the Bluey star on filming the gothic horror film (you can read our review here), what type of shift she has seen in female roles post-MeToo, and how she feels audiences will react to such a slow burn genre piece.

I spoke to Christopher (Hatton) a few days ago and he said to say you were an incredibly difficult actress to work with and that he’s a masochist for hiring you! No, he’s super lovely and in doing my research I noted that he essentially gave you your first major film role…

(Laughs) My first feature, yeah.  (My career) was very theatre heavy.  Had been doing Queensland theatre for years, and then it was the weirdest situation (with) this woman who had been my voice coach in university had done her Masters (degree) in Hawaii with (Christopher).  He was looking for someone who was older but could play younger, and she’s like “Look at this poster for Romeo & Juliet“, and he’s like “I’m not looking for a child!” (laughs).

Did he reach out to you for this role? Do you know if he wanted you specifically for this?

We had stayed in touch over the years and became friends, and whenever we were both in LA (we) would catch up.  (Raven’s Hollow) was something he had written about nine years ago.  There was this really terrible Edgar Allan Poe movie starring John Cusack, who is such a terrible choice (for Poe), and it just decimated any interest in telling a Poe story.  So it was only recently that Chris was like, “I think this is the right time for this film”, and he sent it to me and I had always wanted to do a gothic horror piece, but I just didn’t want to get ahead of myself.  That was, maybe, three years ago.  And then because of the pandemic it was happening and then it wasn’t, and then schedules would conflict and I couldn’t do it, and then I could do it… it was just one of those things, but I needed the universe to line it up (laughs).  And it did in the end.

As you said that it’s gothic horror that you’ve always been interested in.  Was it the horror itself that you found interesting?

It was less the horror and more of the gothic.  I love a period piece.  I just wanted a cloak and to be on a horse.  That’s my jam.  I just really wanted to be in something that looks like I could be dying from consumption (laughs).

Consumption but rocking a corset too!

Yes! That’s the thing.  But when I read this role I could see she’s not an ingenue character.  She has some agency in this in a very interesting way.  Originally, the role that Kate Dickie plays was my father and they changed that to my mother, and when that changed so too did a lot of the dynamics in the film.  And I think for the better.  Also, mainly because I got to work with Kate Dickie, who is everything! I love her so much.  She’s such a brilliant actor, but also just the most incredible human.  We had the same days off so we spent a lot of time together and it was amazing.

As you said, your character here is more than just the ingenue.  She’s not a damsel in distress.  Have you found that since the #MeToo movement there’s been a bigger emphasis on more dimensional female characters?

What’s really interesting after the #MeToo stuff is the breakdown change.  So, the way they would describe female characters pre-MeToo was very much, like, “She’s beautiful, but damaged, but smart”, like all those things are mutually exclusive.  There was always a lot of describing looks.  I saw a lot of that go away, which I love.  It’s slowly, slowly, but I think it is improving.  I think when we’re seeing TV shows like Hacks or Yellow Jackets, such good stuff with great, complex roles for women of all ages, and such good writing…

I don’t know if you’ve seen Physical as well, like, Rose Byrne is so good in that.  I’ve always thought she’s good, but it’s like “Oh, you’ve been allowed to actually do you and run the full gamut of humanity.” She’s so beautiful but there’s that ugliness in her character.  I think that’s where we’re starting to see a bit more in terms of what women have as roles to play.  The industry is changing.  Not fast enough, but moving in the right direction. 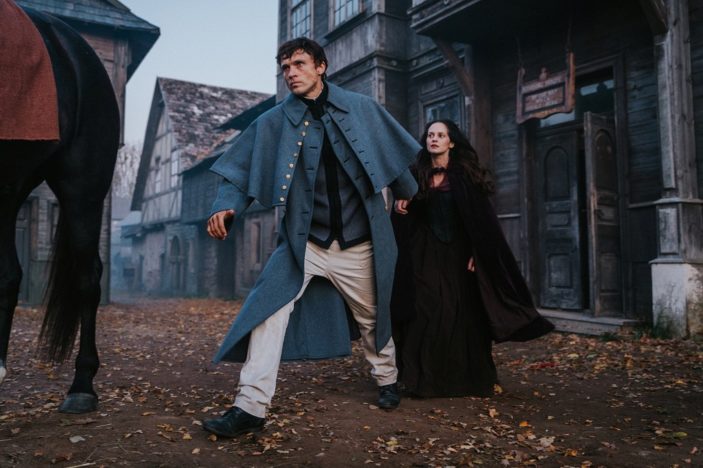 Raven’s Hollow premiered at Fright Fest too.  How did you find the reaction of it playing in a cinema with an audience?

We were actually a late entry, so we didn’t have a huge cinema.  It was obviously (a) very warm reception, but it wasn’t a great way to gage the reaction, but Mathis (Landwehr), who plays one of the cadets, he was in Germany where they had a massive screen for their festival and he said it was incredible.  It was really warmly received.  But because it is a bit of a slow burn – Chris pitched it to me as Sleepy Hollow meets The VVitch, which I think is tonally the right mash-up – and less flashy than some more commercial horrors, it’s not going to be for everyone, but I think the European audiences are like “Yes!”

Yeah, not to talk down to audiences, but this is an intelligent horror movie, and I think when it immediately doesn’t resort to blood and gore that it can be deemed “not a horror”…

There’s so many things that are (part of) a genre, and, for me, the stuff that I really like is something like Hereditary.  I think that is truly one of the most horrific movies I’ve ever seen! Like, real in your brains, haunts you horror.  The psychological commonality with every good horror movie is isolation, and I think (Raven’s Hollow) definitely has those elements.  The group gets smaller and smaller and more and more closed in.  I don’t think it’s for everyone, but I love a period piece and this just happens to be a horror one.

One of the great things about this film is that it utilises practical effects where it can.  Obviously there’s some CGI with the raven itself, but for the most part it seemed all quite physical…

Yeah, other than that (shot) it’s all practical.  I remember when I first came in to check out the church after (the character) Bishop’s death, and, viscerally, my skin started crawling.  I was with one of the set designers and she’s like “It’s all bread” (laughs).  So they did it with bread, but it looks great.

Wouldn’t have known that! I will say the film did have that sense of discomfort throughout, and I mean that in the best way possible.  But Chris certainly indicated that as much as this was a horror film, it was quite a harmonious set…

What you’re able to create in terms of discomfort when you are super comfy? I cannot say enough how nice this group was.  It felt like we were doing a play more than a movie.  Everyone got so close.  There was no dominating personality.  And Will (Moseley) was such an incredible number one.  Such a good leader.  Never putting himself ahead of the other guys.  Just very English (laughs).

(Laughs) We were shooting the scene by the fire, and it’s just us and we weren’t quite getting what Chris wanted, and he just turns to me and says (Melanie putting on her best English inflection) “Melanie, we have to enjoy it.  We work so hard, so we have to enjoy it”, and I was like “Oh fuck!” (laughs) “Well, aren’t you just lovely?!”  We had a great time.  It was a great crew.