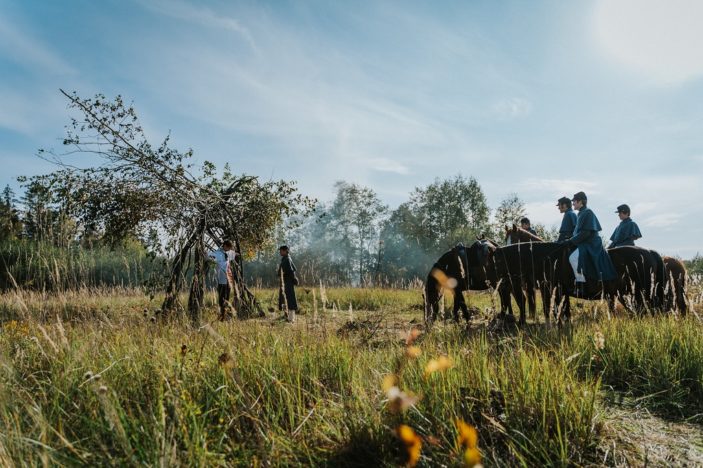 Not exactly an origin story in the traditional – or autobiographical – sense, but a healthy start all the same as to how legendary horror writer Edgar Allan Poe fuelled his creativity for all things macabre, Christopher Hatton‘s Raven’s Hollow indulges in the author’s aesthetic for an atmospheric chiller that favours story over scares.

In 1830, a young Poe (William Moseley, suitably charming) is riding horseback with a quartet of cadets from the Military Academy of West Point, New York when he uncovers a particularly horrific sight; a man, completely eviscerated and barely alive, utters the word “raven” before his displayed body succumbs to its bloody injuries.  It’s enough to unnerve even the strongest of stomachs, and Poe, not content with merely bringing the body to the nearest town – the titular Raven’s Hollow – for them to investigate, is compelled to explore the matter further.

This can only end well.  Right?

As to be expected with such evocative genre entries the locals all appear to know more than what they are letting on, and when more and more people fall victim to someone – or something – within the town, Poe’s intrigue into just what shadowy legend holds such influence over it drives him to a sense of madness that leads us to question much of the film’s narrative validity; just what is and isn’t hallucinatory is something Hatton and co-writer Chuck Reeves‘ script indulges in.

Whilst Moseley proves a fine lead, it’s the film’s ensemble that truly livens up Raven’s Hollow‘s moody pallet, with David Hayman‘s Dr. Garrett, Kate Dickie‘s innkeeper, Elizabet Ingram, and Australian talent Melanie Zanetti as her daughter, Charlotte, all injecting a sense of purpose and distrust to proceedings that keeps the film from petering in entirely predictable water; Zanetti is especially captivating, adopting a sensuality to her delivery that makes the audience all the more suspicious of her actions over the course of the film’s brisk 98 minute running time.

Though fans of “mainstream” horror may not take to Hatton’s slow-burn approach to the storytelling here, and Poe purists best be warned that this in no way claims to be a biopic of any natural proportions, Raven’s Hollow earns its streaming minutes as it, once again, showcases the creative potential that the horror genre tends to uncover within limited budget restrictions.  The film’s look – however hued in darkness it may be – has a glossy sheen that transcends its gloomy decor, and its haunting, orchestral soundtrack booms with an authority that practically begs to be heard on the biggest speaker possible.

Equally lush as it is moody, and a respectful nod to Poe’s own twisted mentality, though Raven’s Hollow may not break the mould within the gothic horror genre, Hatton proves that steering the wheel with an assured confidence over entirely reinventing it is just as horrifically effective.