Interview: Sarah Silverman, Michelle Buteau and Marry Me director Kat Coiro on crafting the romantic comedy and working with “the real” Jennifer Lopez

In addition to hearing the principle cast of Marry Me discuss the making of the film, Peter Gray chatted one on one with stars Sarah Silverman, Michelle Buteau, and director Kat Coiro.

In between being serenaded by the two comediennes, he discussed working with Jennifer Lopez, the Anaconda reunion we didn’t know we needed with Owen Wilson, and how a female-driven set differs from other productions.

I just want to say to you Sarah, first of all thank you for giving me the most unexpected of belly laughs with quite possibly my favourite line of 2022 so far regarding, shall we say, going to the bathroom strictly when people are watching…

Sarah Silverman: Oh (laughs), yes! I can only go if people are watching.

That felt very off the cuff and natural, and I was wondering, and extending this to you as well Michelle, was that an improvised line and was improvisation as a whole encouraged on set?

Sarah Silverman: They were really open to it.  We did the script, but they let us be very loose and I made up that line and they let me do it.  It’s always nice and really cool when they trust you with stuff like that.

Michelle Buteau: That really speaks to the powerhouse director Kat Coiro who had so many things to manage, so many locations… there are a lot of things that go into this.  When it came down to the creativity nothing was lost.  Everyone wanted to make sure we got what we needed, that your voice was heard, that you really added your essence to this character so that it’s believable and entertaining.  Sometimes that gets lost because people want to make the day and check off the other boxes.

What was so great about working on this film with all these dynamic women is that they made sure you were seen and heard and made the best product possible.  So yeah, if you’ve got a couple of comedians who can improv, let them do it.  Also, Jennifer Lopez is, I mean, she’s an athlete.  She’s a business woman in a crop top and some heels who is a really good actor, who knows everyone’s lines… she’s going to be directing in 2.2 seconds.  She’s like “If you take it from here and move it over here, we can be home in time for dinner”, and I’m thinking “We can do what?!”

I don’t know if you’ve ever been friends with a dancer person (too), but they are always dancing between takes, so it’s always cardio.  You didn’t even ask me a question… Peter! You have trusting eyes.

Sarah Silverman: You know, J.Lo uses so many different parts of her brain.

Always a good thing, because women get shit done! And it’s always amazing seeing more and more female directors.  How was Kat to work with as a director? Do you find the filming experience and set atmosphere different with a woman at the helm?

Michelle Buteau: For me, 100 percent I felt the difference.  There was this care that everyone had for you.  Whether it was saying hello first thing in the morning or goodbye last thing at night , I always felt like my voice was heard and that I was taken care of.  That I knew what was going on.  Sometimes you get lost in the sauce of the “What are we doing?”, and because everyone wanted to do their best I wanted to be my best.  I think that’s a really fun, important place to work and we lose that sometimes. 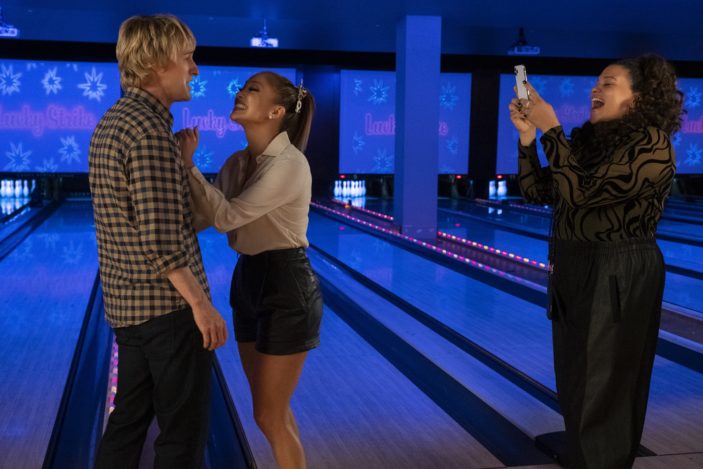 There’s a moment where your character Sarah, Parker, marvels at Kat as being “Like a real person”.  As you were talking about Jennifer earlier, how was it getting to know her as a person away from the persona that we see?

Sarah Silverman:  I really do feel like my character in that.  I should know better, but she’s so iconic, but you have that feeling of “Yeah, I know her”… there’s that familiarity.  Michelle and I are comics so when people recognise (us) they really feel like they know you, that you went to camp together.  With someone like Jennifer it’s like seeing a rare animal, a gazelle (laughs), I don’t know what I’m saying, but there’s something extra special about it.  And on top of that, you think how can she be so down to Earth? She’s a mom, she’s a sister, she’s a daughter, she’s all those things, and then to have such excellence and control and power and dignity…

Michelle Buteau: Yeah, there’s no apologising.  Especially to have a Puerto Rican woman be the lead.  The diversity alone.  Representation is everything.  When I was growing up I didn’t see myself, and all those little girls and boys looking at J.Lo and Maluma living out their best dreams on stage and still be good people? That’s bigger than just a movie, it’s a movement.

There’s a lot in this film about “taking back the narrative”, and it felt very in line with how Jennifer has held herself through her career, but I also feel like it extends to both of you in the comedy field as it seems like it’s been a very male-dominated industry.  Some of my favourite comics are women.  Had you both met each other on the comedy circuit prior to working on this film?

Sarah Silverman: We have so many mutual friends in stand-up, but we really did meet on this movie.  And we fell in love.

Michelle Buteau: Yeah, I felt like one of those people at camp that knew you.  I knew you from stand-up before I started doing stand-up, but when people say you are the company you keep it’s because you’re around so many people that you love.  So, of course she was going to be an amazing person.  I’m really thankful for this moment.

Michelle Buteau: We did.  We had two really big scenes together and they were full days.  And a full day with a really big cast, like kids and so many moving pieces, you really feel like you spend a whole year together.  Besides that and being comedians, it was like, “Oh yeah, this is our summer camp”

Sarah Silverman: It was our autumn camp. 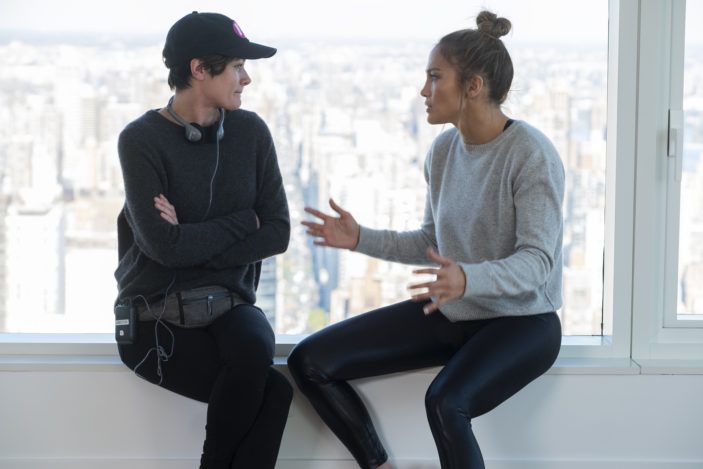 Kat, congratulations on the film.  It is so inherently delightful.  I’m an unashamed fan of the romantic comedy genre, and to say I’m a Jennifer Lopez fan would be putting it mildly, so the melding of the two certainly is appreciated.  The films you’ve directed, and even the television episodes thus far, have been predominantly in the comedy field, what is it about the genre for you that speaks to you?

Kat Coiro:  Thank you.  The thing about genre is I always look for the humanity where I can enter into a story.  Does this character have something that’s relatable.  Are they someone I want to spend time with.  And then, whatever genre they happen to fit into there are certain techniques that I use, but it really does come down to those characters.  I always feel in order to get heart it’s easier to surround that with comedy.  You avoid being schmaltzy and sentimental if there’s humour.

I thought this film had a really beautiful blend of that grounded reality with humour and heart.

Jennifer Lopez’s music is such an integral part of the film.  Was it a collaborative process in constructing the songs with her and the writers in fitting in to the story you wanted to tell?

Kat Coiro: It’s a hugely collaborative process.  One of the things that was really important to me is that we weren’t taking musical interludes.  Our songs are all directly related to the narrative and to the emotional arc of the characters.  So a huge part of the prep was selecting the songs.

When you look at a song like “Church”, which is this huge spectacle performance at the original wedding with Bastian, that was an old song Jennifer had recorded that she never released.  But it fit for the beginning of the movie where she’s this larger-than-life, spectacle oriented pop-star.  And then she gets publicly humiliated and she has to bring back that confidence in herself, so a song like “Love of My Life” comes around, and that was written for the film.  Jennifer really connected with it.  “On My Way” is another song that was submitted and when we all heard it we knew that it was the one.  The one where she runs through the airport to find her love.

One thing I really pushed for was to have the songs performed in their entirety.  They aren’t just something the character does.  This is a rom-com about two people falling in love, but it’s also the story of an artist finding her voice.  Going from being just a performer to someone who taps into her personal experience to create songs that convey her humanity.  To me, Kat Valdez has a different sound than J.Lo.  Of course there are so many overlaps, but how is Kat different from J.Lo, and her sound is one of those.

And we have the Anaconda reunion we didn’t know we needed, with Jennifer and Owen Wilson.  He’s so likeable and charmingly grounded, yet I feel like we don’t see enough of him in this genre.  How did he come about when casting?

Kat Coiro: I have been a fan of Owen Wilson since I was a teenager.  I think he’s so singular in how he comes across.  He’s this very charming, down-to-Earth guy, but there’s this huge amount of confidence in him.  And his confidence comes from his vulnerability and his humanity.  To me, there are so many versions of this film that wouldn’t work and a huge part of that is with (his character) being a hanger-on who feels super impressed with (Kat’s) lifestyle.  Or who gets picked out of the crowd because he looks like a supermodel.  To me, Owen was the only person I ever wanted to do this role.  It was crafted for him, and he brought so much to the role.  He’s very confident but he’s also very humble and down-to-Earth.

Marry Me is screening in Australian cinemas now.