Interview: Eddie Redmayne, Mads Mikkelsen and the cast of Fantastic Beasts: The Secrets of Dumbledore 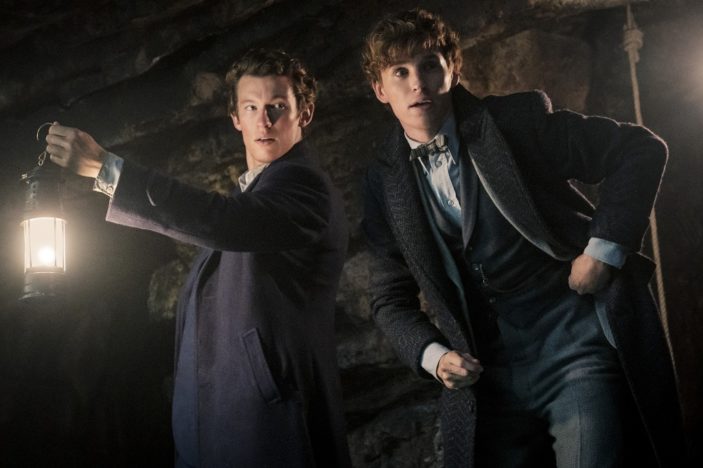 The magic of the Wizarding World is once again conjured with the release of Fantastic Beasts: The Secrets of Dumbledore (you can read our review here).  As the film prepares for its global launch, Peter Gray was fortunate to speak with key cast members Eddie Redmayne, Jessica Williams, Mads Mikkelsen, Alison Sudol, Callum Turner and Dan Fogler about their evolving characters, if working with special effects has become easier, and how it was for Mads joining the franchise.

Eddie, given that you’re three films deep in this franchise now, are you still uncovering further quirks within your character?  Injecting anything new?

Eddie Redmayne: I don’t know about quirks.  I mean, Newt has a few, but it’s more just where the script has taken him.  What I love about this film particularly is Newt and Dumbledore’s relationship.  It’s always been a master and apprentice type thing.  Here, I wouldn’t say they’re level but more an older brother/younger brother thing.  There’s a moment in this (film) where Newt sees a little vulnerability in Dumbledore and gives him council, and I love that Newt gets to give some sage advice.

Jessica, when you joined the previous film, were you aware of just how important your character was going to be for this particular story?  Because you absolutely dominate this film!

Jessica Williams: Yeah, I did.  I had a good idea of where Eulalie’s journey (was going) when I did the second movie.  It’s funny, my shoot for the second movie was an hour.  I came to set, I was in the book, I remember speaking… it was a whirlwind.  There was this incredible backdrop and so many moving parts, and it was the end of the shoot (for Eddie).  Everyone was kind of in this incredible machine.  For this film I came about a month before.  There was all this build up, but I was also dropped into this machine.  I felt like I really joined a family (this) time around, because I got to do all these amazing things with Eddie and Dan (Fogler) and Callum (Turner).  It was a delight.  It was really fun.  I hope to see more of Lally (Eulalie) in the next ones.

You’re both working so flawlessly with special effects.  Is it a process that’s becoming easier?

Jessica Williams: No! There’s this part where we have to go into this room and stand like a weird doll, and they have, like, a hundred cameras all around you.  It’s like a tube of cameras.  They shoot you and they flash, and that never got easier for me.  Did it ever get easier for you?

Eddie Redmayne: It’s so strange.  You stand in this room and shot by a million cameras in order for them to have every detail of every part of your body.  I think it’s a way for the film studios to take the actor’s identity…

Eddie Redmayne: So that they never actually need the actors anymore.  They can just use us as avatars.

Jessica Williams: I actually didn’t do any of my scenes in the film.  They just green-screened and coded me into the film (laughs).

I understand this film had just commenced filming before going into that global lockdown.  How was it shooting again after so much time?

Eddie Redmayne: So I had done one day of shooting.  It was a Friday, it was a scene with Newt’s briefcase, and then on the Sunday we got the call saying “There’s this thing called COVID”, and we were to stop for a couple of months.  Now, the next scene I was meant to shoot required me to lay in this lake at night, which we were meant to shoot in the summer.  Then COVID hit, so I found myself in December, when we eventually came back to shooting, having to lie in this man-built lake, overnight, and suddenly it wasn’t quite such a fun prospect.

And Jessica speaking of that feeling of joining a family, how was it for you Mads with your first foray into this Wizarding World?

Mads Mikkelsen: That was easy.  It’s a very tight-knit family, so you can be nervous that they won’t want to adopt you, but that wasn’t the case.  They were all very welcoming with open arms.  And you can tell they enjoy working together because there’s this mutual respect from everyone.

Alison, your character, Queenie, is arguably the one who has evolved the most over the course of the films.  It must be exciting when reading the script and seeing that change, and knowing you can play with the shades of who she is and who she was.

Alison Sudol:  Absolutely.  It’s no fun, well I won’t say no fun because I would happily play joyful Queenie forever, but it is much more challenging to go through that evolution of a human being.  I like that she’s kept me on my toes, and that we don’t know how to predict her anymore.  I really like that.  There’s way more to her than we thought at first.  Well, I always knew there was something to her.

Mads Mikkelsen: And it’s not just a change for the sake of changing her.  We can actually understand what is happening here, and we are curious about what decisions she’ll make.

Alison Sudol: And her essence is in question, and who she is really defines where she goes.  And you see that come in to the forefront.

And because Queenie was so closely aligned to Newt and Jacob and Tina, and then Grindelwald pulled her away from that, with your characters interacting so closely, how was it working with Mads?

Alison Sudol: It was so great working with Mads.  It was amazing.  I would say that Grindelwald didn’t necessarily pull her away, I think the state of the Wizarding World pushed her into the arms of someone like him, and she was easy prey.

Mads Mikkelsen: She was in limbo-land, and (Grindelwald) is very good at spotting people in that land.

Alison Sudol: He may not be the person you want to solve your problems necessarily, but this does take a look at the way people treat the “other”, and (Grindelwald) acts like he can make the world different.

Mads, the relationship that’s explored between Grindelwald and Dumbledore is one that’s organically mentioned and quite beautifully subtle.  Was that something that yourself and Jude spoke of?

Mads Mikkelsen: It is subtle on paper.  And we wanted it to be subtle.  I think we’re trying to make sexuality and skin colour the least important thing in history.  It’s just about people having a past, or having a history, and we wanted that to come across.  It’s just a genuine situation.  That meeting in the beginning (of the film) is just old love meeting again, with a big slice of disappointment.  And that’s what we thought it looked like.

Callum, outside of these films your work is incredibly varied.  Do you enjoy the challenge of a role such as this as it’s within a universe that’s so far removed from reality?

Callum Turner: Completely.  I love it so much.  I love coming to work with people that are ultimately at the top of their game across the board.  I get to come and learn from people like Dan and Eddie, it’s an honour.  And we have a great time.

And Dan, you’re primarily known for your comedic work, and though your character, Jacob, is the comedic relief in these films, there’s emotional stakes present here, especially with his feeling towards Queenie.  Did you enjoy working with more dramatic material?

Dan Fogler: Oh yeah, yeah.  I’m a sad clown kind of actor.  Love people like Robin Williams, who could make you cry and laugh in the same sentence.  This guy (pointing to Callum) steals the movie though with the comedy.  Especially in the manticore scene…

Callum Turner: Basically I just try to be Jacob Kowalski in our movie.

Dan Fogler: There you go (laughs).  That’s the lesson for everyone out there, be more like Jacob Kowalski.

Dan Fogler: No, don’t do that.  But, yeah man, I love playing that character.  It’s the character of a lifetime.

Callum Turner: Can I just tell you too that Dan’s grandfather in real life was a baker.

Callum Turner: On the same street! I just found out today.

Dan Fogler: Isn’t that wild?  It was “Fogler’s Pumpernickel”.  That was the whole thing, he was famous for the pumpernickel.

Callum Turner: Was it passed on?

Dan Fogler: No.  My grandfather was one of thirteen kids.  I don’t think any of them took up the bakery.  A lot of them went into bootlegging (laughs).

Callum Turner: My grandad was one of thirteen too.

Callum Turner: And they all just fled London.

Dan Fogler: We learned a lot about each other today.

I’m going to take credit that you two got to know each other better because of this interview.

Dan Fogler: Well, how many children did your great-grandfather have?

You know what? Thirteen as well!

I asked Eddie and Jessica about working with special effects and if that process was any easier.  Is it something that you’re both comfortable with?

Dan Fogler: Yeah.  I come from theatre where you literally don’t even have furniture, you just imagine everything.  So I had that coming into this, and thank God they have the technology where it can be a lot less technical.  It used to be that you’d have to look at the tennis ball, and if you didn’t it’s completely thrown out the window.  But now, they put in the effect where you’re looking.  I learnt that on the first movie.  I can look wherever and they’ll just paint it in there.  That was such a huge relief.

Callum Turner: Also, the fun thing about these movies is that we have the technology and we have the people at the top of their game.  They’re brilliant at making these effects, but there’s also the old-school movie magic.  If a door is opening by itself as we are walking towards it, guaranteed there’s a guy or girl on the floor pulling it open.  It’s all about that timing.

Dan Fogler: You know what’s great? In the scene where Jacob has the wand and the hurricane is happening, that is a combination of me doing mime work from college and all these special effects.  I love that.  It’s the simplest acting combined with the most technical of medium.  It’s pretty great.

Has being in these films changed the demographic of who approaches you? Do you feel a certain responsibility in being part of this Wizarding World now?

Dan Fogler: Yeah.  Meeting Tom (Felton) the other day was pretty cool.  It’s like “We met Malfoy”, and just the foundation they built with those first movies… people love them so much.  The fans are so lovely.  We see them at the premieres and Comic Cons, and you want to give them a wonderful film, a wonderful adventure.

Callum Turner: Also, you can do really sweet things.  My cousin in Yorkshire was 9-years-old when the second (Fantastic Beasts) movie came out and I gave him a letter from (my character) Theseus and a wand.  It made him so happy.

Dan Fogler: Did he really believe it was from Theseus?

Callum Turner: No.  I signed Callum by accident (laughs).

Fantastic Beasts: The Secrets of Dumbledore is now screening in Australian theatres.