I Can’t Change The Way You Change: Future Haunts takes us through their latest EP track by track 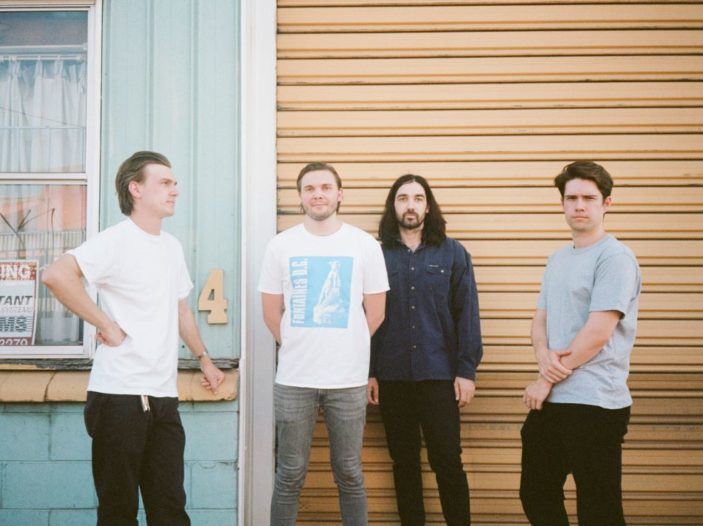 Brisbane’s Future Haunts have just released their latest EP, I Can’t Change The Way You Change. The four-piece have teased out a couple of singles earlier this year, in “Social Glue” and “Accelerator”, ahead of the release of the EP.

The tracks are written for the current time, and resonate strongly due to the uncertainty caused by the pandemic. Coupled with pending fatherhood for lead vocalist and guitarist Ben Speight, the songs explore the weight given to the arts by society, toxic masculinity as well as the challenges of climate change.

The EP features ripping guitars, tender melodies, driving percussion and warm harmonies. The songwriting is adroit, artfully paired with changeups in tempo throughout. Future Haunts have put down some fine alt-indie rock on I Can’t Change The Way You Change.

The EP was recorded at Plutonium Studios. It was engineered and mixed by Aidan Hogg, and mastered by William Bowden. The band will be launching the EP at The Zoo in Fortitude Valley, this Saturday night (20th November). Further details are below.

To celebrate the release of the EP, the band have put together a track-by-track breakdown, detailing the background to each song. So do press <play> and have a read to what is a fine record from the Brisbane quartet.

Looking back at the EP, the meaning around some of the tracks has only become apparent recently through hindsight and having the time to reflect. It was written around the time I was expecting my first child during peak-covid, and there’s a lot of strong and consistent themes coming through around uncertainty, distance and dealing with change on a large scale. Whilst it does gravitate towards personal reflections, there’s also a lot of outward-looking commentary in there around social change (or the inability to achieve it) and the ever-growing uncertainty about the future of our planet. The EP explores some new ideas and sounds for us as a band, having Aidan Hogg onboard for the recording process really helped us tap into some areas we hadn’t been before, letting things breathe and capturing ideas that truly serve the overall songs.

This song was written pre-covid, but in a weird way became somewhat of a premonition to the current sentiment being felt in the music industry through the pandemic, with the constant double standards being applied and ongoing devaluation of music and the arts in general on full display. It’s a bit of a tongue in cheek nod to the fact that people benefit in so many intangible ways from art and music, but aren’t always willing to pay it back and support it as a valuable industry – hence the term money for old rope. Recording it was a fun challenge trying to get all the parts to fit together, with a juxtaposition between the two guitars and trying out a lot of vocal variations – really proud of how we turned this one from some pretty obscure beginnings into a great track overall to ease into the EP.

“Social Glue” signals my distaste for toxic masculinity and old fashioned acts of patriarchy. It’s everywhere, in everything we do and no matter how much we try to stamp it out it keeps on coming back. The Bachelor, footy boy antics, advertising and your click-bait nightly news – all big inspirations behind this one. It’s a pretty angry, fast-paced song and we really wanted that to shine through on the recording, keeping things simple and letting the message come through untouched. Bit of a hoarse voice after laying down the vocal track here.

This one is about distance and being away from the people you care about for an extended period of time. Everyone knows the feeling and we did our best to bottle it up in this track. We saw Egoism a couple of years ago at Bigsound and were just blown away by some of the guitar tones and parts, figured out it’s in DADGAD tuning (hello guitar nerds) and Tom wrote this one as a result. Also put some synth in towards the end which was fun and we’re really proud of how this came together. A pretty solid Future Haunts special.

I Can’t Change The Way You Change

We wrote and recorded this when I was in the lead up to expecting my first child. A lot of uncertainty about the future and how my life would change, with all of the impending sense of potentially losing control of who you are that comes with it. It’s something that a lot of men don’t like to talk about but I felt it was important for me to open up and share my experiences. This track actually took a fairly different turn once we started recording. Aidan (producer) helped us explore some different textures and we even threw a synth in there for the first time ever as a band. Probably the most we’ve experimented with ideas and sounds on a track and was really fun to put together and see where it landed.

All That I Have Ever Known

This one was heavily inspired by a lot of Protomartyr and Nick Cave I was listening to at the time. I really wanted to do something a bit different and have more of a spoken word type delivery. It’s based around themes of ultra-conservatism and fear of change for no valid reason. In a way we initially thought of this track as the runt of the litter, weighing up whether it had its place on the EP – it has no real right to slap as hard as it does – but now we all reckon it’s one of our favourite tracks and can’t picture the EP being complete without it. A bit of inspiration from some of the heavier guitars on the newest DIIV record coming through here too – heavy but beautiful and intriguing at the same time.

This one is a bit of a reflection on climate change and the state of the planet currently. It’s an absolute unashamed “get your lighter out” track and it’s been getting a really good reception live. It’s got some pretty heavy themes but also a really warming sound and melody to it that just seems to work well and balance things out. Writing and recording came easy for this one – just seemed to find its own way and we left it pretty untouched in the end. The title is fairly self-explanatory – it came from my dog constantly barking at the same trains at the same time every day, even though he knows it’s pointless and unlikely to change anything – bit of a metaphor for how it currently seems influencing or achieving any meaningful climate reform.