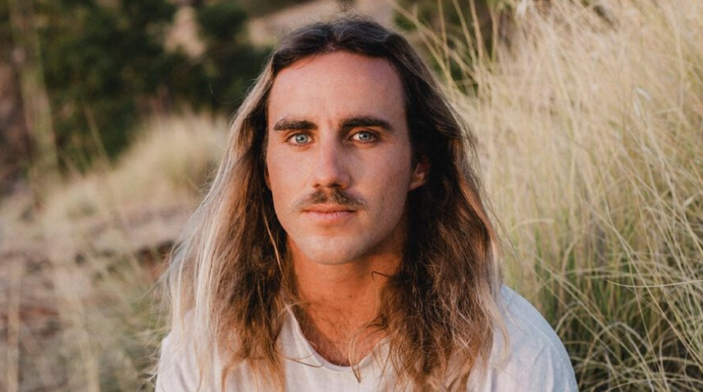 Two weeks ahead of his debut album release, Michael Dunstan has dropped his latest single, “Smoulder or Ignite“. As well as being our final glimpse of the upcoming In The Grand Scheme, it’s also a cracking folk tune.

In support of the album’s launch, the Wheatbelt folk singer has also revealed details of a huge national tour. Kicking off in Perth on February 27th, $1 dollar from every ticket sold will go to Happy Monday. It’s a venture close to Michael’s heart, with long time friend Daniel Hedley attempting to ride a penny farthing (yes, you heard that correctly) from Brisbane to Perth. The goal is a hefty $1 million dollars, split between several charities including Headspace and Beyond Blue.

With so much going on, we were lucky to grab a few minutes of Michael’s time. He put together a guest playlist for us – check it out below!

“Smoulder or Ignite” formed a 4 or 5 months after the unexpected parting of myself and a loved one, for reasons out of both of our control. The song is simple, and was used as a blank canvas to try and start taking positives out of the end of the relationship, that I’d been dwelling on sadly for too long. I realise how incredibly lucky I was to meet that person at all.

Here’s some of the sounds and artists that helped shape “Smoulder or Ignite”:

Caamp – “Moonsmoke”
“Smoulder or Ignite” was written on my front porch in the space of a few hours, and to me felt like it shared a tiny bit of the direction of Caamp’s songs. It’s perhaps a little more upbeat and country sounding than a lot of my songs, drier vocals, with more playful harmonies. For a song that’s shedding positive light on an unexpected parting of two people, I wanted it to have a little more character and be more real. I wasn’t as stringent on this track sounding polished.

The Western Den – “Spark, Set Fire”
I stumbled across this band and song by accident one day, and was blown away by the nylon guitar, brushes and vocals. Ironically, I’m just reading the title now and it looks super related to ‘Smoulder or Ignite’, but I stumbled on the song after I had penned the lyrics to ‘Smoulder or Ignite’. Maybe that’s why I related to it, maybe not. This song re-affirmed me wanting to explore more on the new album with fuller compositions with drums.

Henry Jamison – “Darkly”
This song is in here purely for the guitar tone. Full, warm as anything, and relatively dry, but magical. Very nice subtle ambience riddled throughout the song too.

The Paper Kites – “Woodland”
“Smoulder or Ignite” was just acoustic, vocals, drums and bass before heading into the studio with my producer Andrew Lawson. When we tracked it in there, it always alluded itself to having some clean, very simple electric guitar over the top. I went away overnight and came back with something that I felt was almost too simple, but we tracked it and felt it added plenty of spark to the track without stepping on what I was trying to convey in words. Whilst I hadn’t heard this song in a long time, I feel like I was channelling the same sparing natured electric lead like in this song here from memory.

Guantanamo Bay Surf Club – “Halves and Quarters”
One of my most listened to songs in the last 6 months. Simple acoustic band jam with vibe for days. I just love it.

Ben Howard – “Keep Your Head Up”
This song/album was a bit of a mental note of reference for the production of the album alone (not song-writing wise). I wanted the album to be more sparing, on reverb, on production, less double vocals and more me. I think for a song like “Smoulder or Ignite” which is telling a personal story about a positive outlook on past heartbreak, it’s easier to hear and relate to it in a more raw, stripped back manner.

Fionn Regan – “Collar of Fur”
Fionn is understated magic. The effortlessness in his vocals is something I really admire on his new album Cala. While it might not shine through the whole time in “Smoulder or Ignite”, there was a conscious effort to really sit back on the vocals in parts of the songs on the record when it was justified. Also a little bit of inspiration to explore some lower parts of my vocal register, which is more evident on this new album In The Grand Scheme than the earlier releases.

Georgia Fair – “Picture Frames”
I wanted “Smoulder or Ignite” to live in a similar little joyous world to this song. Purely a reference for vibe and the upbeat nature. I have very fond memories of listening to this song a long time ago, and wanted to try instil some of that golden nostalgia into one of my songs for someone else to relate memories to.

Hollow Coves – “The Woods”
Simplicity of lyrics. I wrote a very simple chorus for “Smoulder or Ignite” and wanted to get rid of it. It was too simple, too obvious, too repetitive. That’s what my mind was telling me anyhow, and I’ll admit I have a habit of writing songs that are unpredictable in structure, lyrically and musically. This song by Hollow Coves was a good mental note of a great song with simple lyrics and great structure. A reminder to keep it simple, there’s plenty of complex songs on the new album In The Grand Scheme, so let this one be simple and obvious, because it wants to be.

Thanks to Michael for his time!

In The Grand Scheme is scheduled for release on Februrary 28th.
And here’s all the dates for his upcoming tour – check out his website for tickets and more info.

In the meantime, stay up to date with all things Michael Dunstan via his Facebook and Instagram.