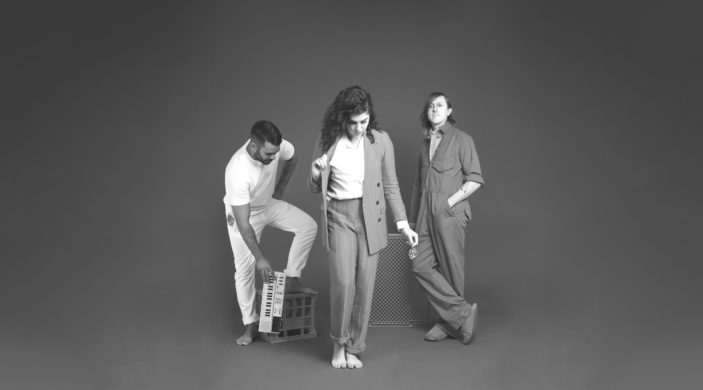 They’ve been teasing its release for more than a year, but Melbourne’s Howlite are all set to release their new EP Not Here next week. It’s coming later than originally planned, but that’s 2020 for you. But, before we get to the EP, the band have one more single for you all: “Canary”. And we’re excited to bring you this exclusive first listen ahead of its official release tomorrow.

There’s no denying we’re fans of Howlite here at the AU. We covered previous singles “Infancy” and “Stranger” earlier in the year. With each new single release, we’ve been able to explore the group’s sound and musical foundations that little bit more. “Canary” continues that journey and builds upon it.

Like it’s predecessors “Canary” is a powerful, atmospheric release, with an alluring gravitas at work. Much of the song’s power and affect comes from Alison Thom’s exquisite vocals. But, the contributions of Ben Botting and Andrew Moscatelli cannot, and should not be overlooked. Collectively, the trio have tapped into a rich vein of creative form on the singles that make up Not Here, and we’re the beneficiaries. As I’ve said before this is the sound of a band fully confident and comfortable in their abilities, style and sound.

As with their previous releases, “Canary” explores ideas of the self; and with working out where you stand in relation to others. Specifically, “Canary” looks at the balance of relationships, and further explores the idea of disconnection between others and ourselves. It grapples with those feelings and longings to be loved and accepted, but also not being sure quite how to get to that point. According to vocalist and songwriter Thom:

“Canary” is the final single off our upcoming EP Not Here, and is about the emotional weight of self identity in relation to other people. This is a recurring theme throughout the EP itself; which acts as a dialogue of tracks from the last few years of my 20s, working through dense emotional and psychological material. It’s a capsule of a mindset, and we worked really hard to develop a sonic palette that would help create a little family of songs. Each one is different, but they’re all still connected.

Give “Canary” a play below, and make sure you pre-save Not Here whilst you’re at it.

“Canary” releases tomorrow October 9th. Pre-save it HERE. The EP Not Here is out October 16th and can be pre-saved HERE.

You can also keep yourselves up to date with Howlite via their Facebook, Instagram, and Official Site.