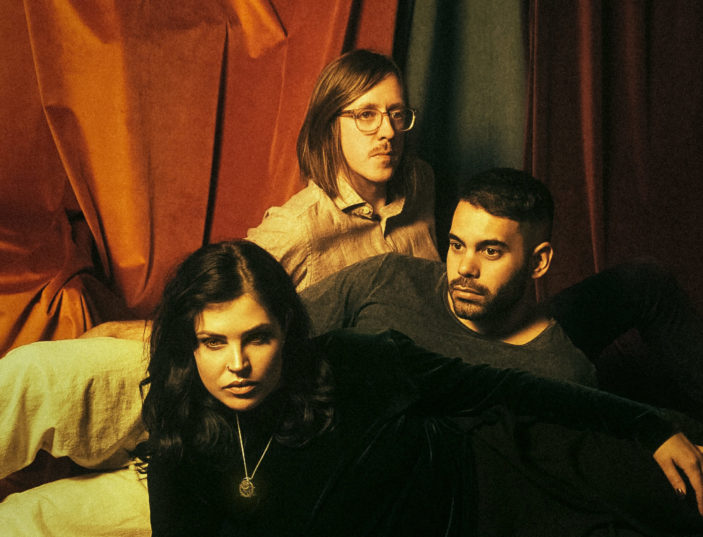 Melbourne band Howlite make their return this week, with new single “Infancy”. Offering insight into their forthcoming EP Not Here, the single sees the trio venturing into the territory of “dark” other-worldly pop. We’re excited to bring you this exclusive first listen ahead of tomorrow’s official release date.

Alison Thom’s beguiling vocal is what immediately captures your attention on “Infancy” and sets it apart. The instrumental bedrock of guitars, beats and swirling samples compliments the vocal perfectly. It’s pop, but with that extra little something, that just elevates the lyrics and grabs the listener’s interest. Brooding and moody, it’s the sound of a band fully confident in their abilities, style and sound.

According to Thom, the song “deals with the idea of responsibility, growing up and having to take control of your life but not feeling prepared to do so just yet.” It’s a song which has become all the more prescient thanks to the uncertainty of a world in the midst of a pandemic. After all we’re all a little bit lost and at the whim of forces out of our control. Or as Thom suggests: “We’re all just kind of muddling through, connected to each other for support and trying to look like we’re in control and we know what we’re doing.” Whilst, she might be talking more generally about adulthood, it’s a sentiment that is particularly apt in our present shared situation.

“Infancy” also explores the “ebb and flow” of everyday life and our ability to cope with all that gets thrown at us. According to Thom, “some days I feel very capable and independent, and some days I feel overwhelmed and retreat, either psychologically into myself, or physically withdraw from the world. Infancy talks about this sensation ‘life cries out – I ignore it'”. The song also explores imagery of motherhood and babies, as Thom explains:

Coming into the period of my life where friends are now conceiving and we are becoming parents has been a huge shift. And, the song processes the idea of feeling very much like a child still, but being suddenly responsible for another life, as well as for your own. The idea that none of us are really ready, and there’s never a point where you are ‘grown up’ in the way you thought you would be when you were a kid.

Make sure to pre-save and pre-add “Infancy” on your preferred streaming services. Until then, give it a spin below.

“Infancy” is out Friday May 15th. Keep up to date with Howlite via Facebook, Instagram, and their Official Site.