“There are monsters under your bed”: Talking “Stranger” and Not Here with Melbourne’s Howlite

As Melbourne once again enters into lockdown, locals Howlite are all set to release their striking new single “Stranger”. A long time in the making, “Stranger”, is the final track to be released from their forthcoming EP, Not Here, which is scheduled to be released in September, barring any further COVID-19 induced disruptions.

Unsurprisingly, the pandemic has knocked a lot of Howlite’s plans off course, just like everyone else in the industry. Yet, “Stranger”, will not be their first release amidst the uncertainty. They released their previous single, “Infancy” back in May.

Despite the disruption, the band has been trying to make the most of the quarantine period despite being split across suburbs, with songwriter and vocalist Alison Thom arguing that it’s “given us a chance to stop and evaluate the next few years, and open ourselves up to new and ideas and plans moving forward”. It’s also given her space and time to “write and develop a lot of demos that sit outside the world of Howlite”. 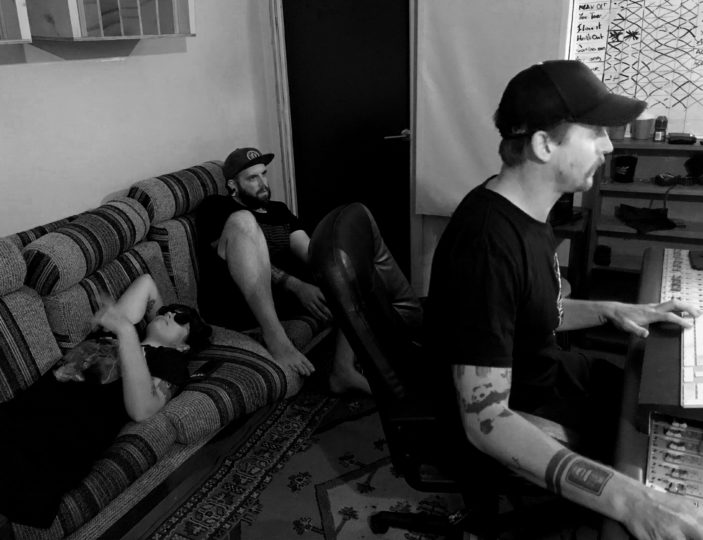 According to Thom, the band’s quarantine “success story” is keyboard player Andrew [Moscatelli], who’s spent the last few weeks making salami in the garage. Drummer Lyle [Jenkins] has been working construction, whilst guitarist Ben [Botting] has been working from home. Meanwhile, Thom has been “madly writing depression concept albums each week” before scrapping and refreshing them as her own personal way of keeping track of the time. She’s also been “writing artist biographies and drawing people as Bob’s Burgers characters”.

Whilst they’ve clearly been making the most of their time, it’s clear there remains an itch to perform some IRL gigs. The hope is they’ll be able to get something happening before the end of the year, to celebrate the release of the EP and, as Thom drolly suggests, to “see if we can remember how to play our instruments”. 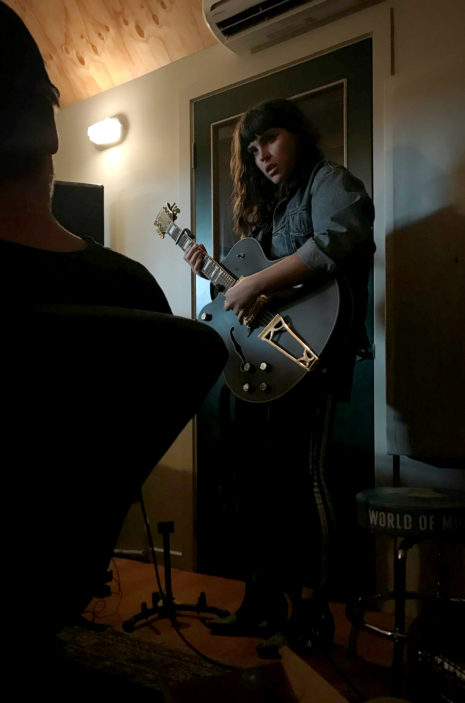 To that end the band are in the midst of converting their garage into a “pandemic friendly DIY bar”. Thom and the band hope that The Car-hole, as it’s to be named (for all The Simpsons fans out there), will be a space to live stream talks, performances and listening parties with local artists and friends. With restrictions freshly tightened, it could prove to be one of the few realistic options for playing live, and the band are encouraging local musicians with upcoming releases to get in touch with them.

The conversion might not be complete in time, but the band will still be celebrating the release of “Stranger” tomorrow with a stiff drink. But, the song almost never saw the light of day. Thom was close to scrapping the song. It was, as she describes it, “sitting in a weird Mumford and Sons hoe-down place which was growing further and further away from new stuff I was writing”. A last ditch effort to save the track saw Thom turn to “Portishead and similar kinds of artists who brought things right down”. A tempo and time signature change, and the addition of sampled vocal riff as a focal point, later and the single was transformed.

“Ultimately, I felt like there was potential for the song, and it was a conversation I wanted to have as an artist for my own childhood healing, so I’m glad it found a home on the EP.” 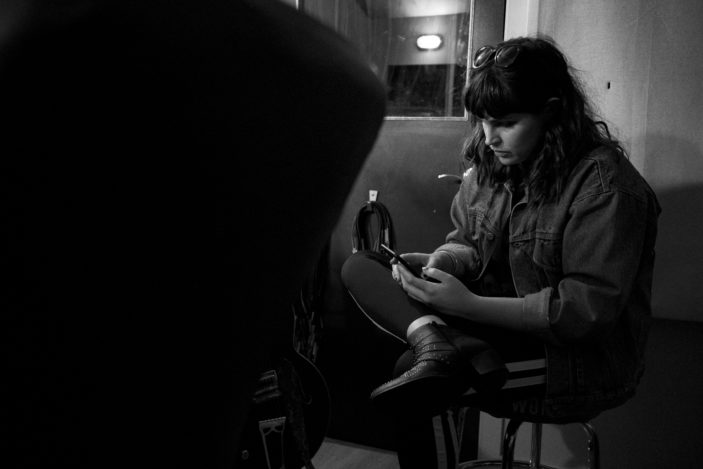 A striking and powerful track, “Stranger” is about Thom’s relationship with her mother during her teenage years. In 2006 Thom’s mother was formally diagnosed with clinical depression, and spent the next decade of her life in facilities receiving treatment, including electro-convulsive therapy.

One of the major side effects of the treatment was memory loss, which resulted in what Thom describes as a “disconnected relationship” for a number of years. According to Thom, “There were many years growing up that I struggled to connect and relate to my mother while she was dealing with her own demons, and there was a lot of confusion, hurt and selfishness on my part that I unfairly unleashed on her because I was too young to appreciate the situation”.

But, the song approaches the relationship “with a few years of maturity behind me, and comes more from a place of mourning for what we both lost”. The song neatly balances both perspectives, the chorus, “there are monsters under your bed / I know, I’ve seen them”, offers understanding born from reflection and growth, whilst that teenage sentiment of rebellion and angst remains at its core: “you are strange / I can be stranger”.

“Stranger”, like “Infancy” before it, is a song that deals with incredibly personal issues. So it’s perhaps not surprising to learn that songwriting is cathartic for Thom. Indeed, it was one of the main drivers behind her getting into songwriting at all; “it allowed me to create a song specific to my particular situation, let out all my frustrations and work out how to eloquently convey my point of view”. The last six months have seen Thom use writing as an important mental health practice, a way of clearing her head of ideas, and filtering through them too find “which are valid thoughts” and which are “just you screaming into the void”. 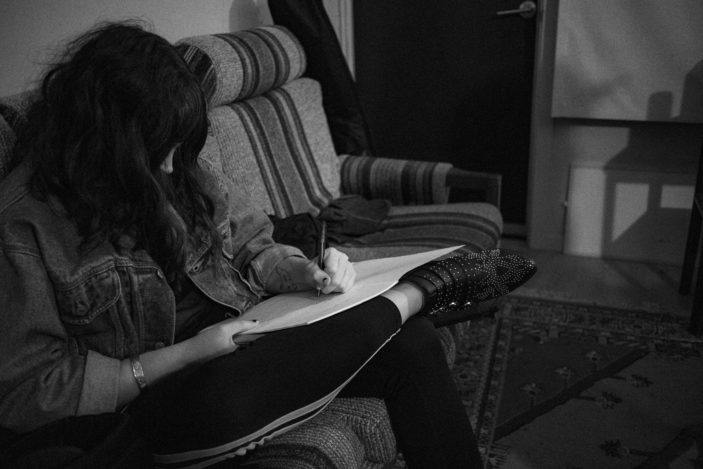 More broadly, the songwriting process is semi democratic, with Thom, the principle songwriter bringing “the bones of the song to the band”, “explaining what I’m hearing in my head”, and then trying to translate that into charts and tabs. According to Thom, whilst she’s not a dictator about it, if she’s got a particular vision for a song in her head, she’s not above sulking if necessary.

All in all it’s something of a laidback and relaxed approach. You get the impression that Howlite are a band that are happy to take their time to make sure they get things right. The first versions of “Stranger”, for example, were written in 2014. Even forthcoming EP Not Here has been in the pipeline for a while. Pre-production started back in 2018, and the whole process is described by Thom as “a kind of journey for the band to learn how the industry works, what we want out of our music and what kind of band we want to be”. As it has developed, so to have the band’s soundscape and their approach to recording it. 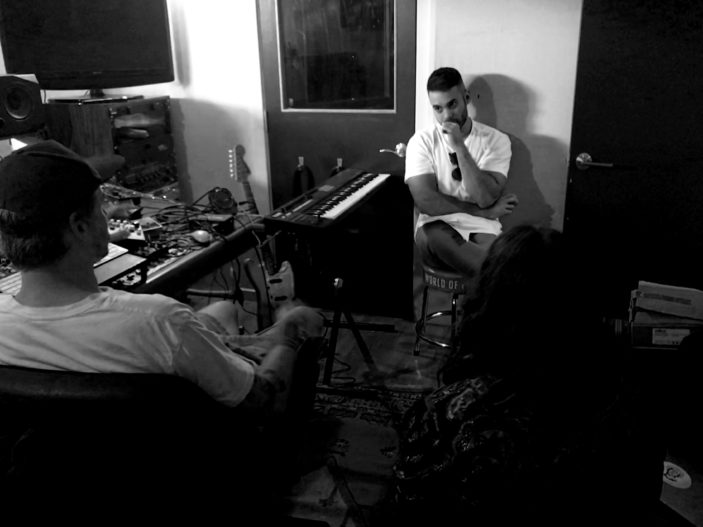 Principally the band worked with producer Tyson Fish and engineer Daniel Caswell at The Alamo in Melbourne. It was there they laid down the foundations for the EP, workshopping, developing and refining tracks. For Thom, they were “invaluable at the ground level” and that their “love and attention” really brought the tracks to life. None more so than on “Reducer”, the first single to be released from the EP.

From there, they spent a lot of time working with Faulk, a local producer and session writer, to “structure artificial trip hop beats and create ambiance and space”. Then, towards the end of the production they were introduced to JP Fung who has come in on the post-production and mastering and helped take the project over the line. Fung, it would seem, has proven to be the production’s missing link.

Having worked with some fantastic Australian artists, like Last Dinosaurs and MANE, Howlite approached him for post-production and mastering support, not really expect too much. Instead, they found a more than willing participant, and Thom and the rest of the band could not speak more highly of their experience working with him.

“He was totally on board and has just been the warmest and most enthusiastic person to work with; he went absolutely above and beyond for our tracks. He brought so much high-end pop production skills and professional knowledge that we could never have conceived, and he was such a boost of positive energy the whole way through. Listening back to “Stranger” we’re still blown away by the level of production. We follow his cats on Instagram now too. The whole thing has been a huge source of joy.” 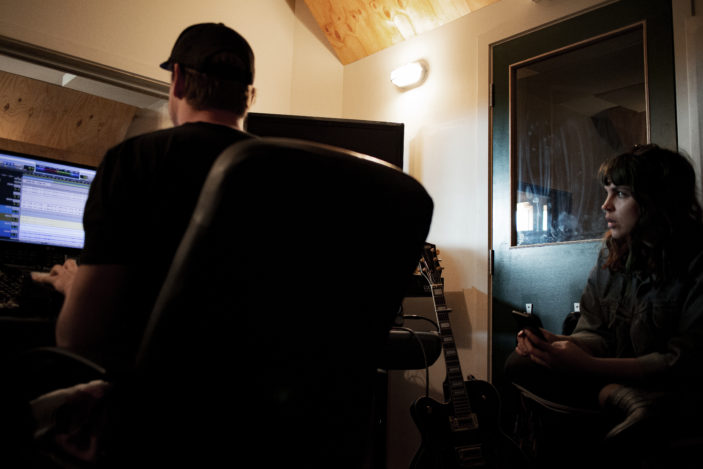 It’s an uncertain time for the music industry. Although, as Thom notes, “the reality is that the music industry has never really been a certainty or even offered sustainability”. The pandemic has just exposed that uncertainty, as well as the depressing attitudes of many in society (and government) towards those in the creative industries. Artists, from all mediums, have continued to create. As Thom notes, “it’s how we interpret and interact with the world, even if no one is listening or paying”. Maybe this year will prove to be a catalyst for some positive change. But, for now, it’s a new month, a new period of quarantine for many, and for the second time this year (and this pandemic) the band are throwing their song out in the void and hoping that “someone sends us a thumbs up back”.

“Stranger” is out now. The band’s forthcoming EP Not Here is scheduled for release in September. Until then you can keep up to date with Howlite via Facebook, Instagram, and their Official Site.

Header Image by Jeff Anderson. All Other Images by Benjamin Botting.