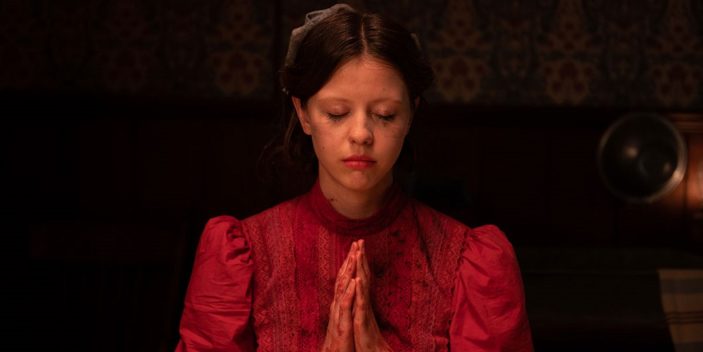 If X was Ti West‘s homage to classic 70’s horror effort The Texas Chainsaw Massacre, then Pearl could almost be aligned with The Wizard of Oz, just with, you know, a lot more blood and dry-humping scarecrows.

The fact that X was an initial singular success story was enough of a win for independent horror cinema in 2022.  Released only in March of this year, the gory, sexy ode to porn-laced slasher films was a moderate hit that defied the increasingly common rollout of a hybrid theatrical/streaming model and opted solely to play out in multiplexes.  The (axe) swing nailed its target.

Greenlit and filmed before X had even come out, Pearl is another brainchild offshoot of writer/director West, who along with his leading lady – the uniquely captivating Mia Goth – expanded on the murderous lore put forth in that film through the character of Pearl; Goth, despite playing X‘s ensemble focus Maxine, was cased in prosthetics and aged make-up to surprisingly play the elderly woman whose sexual desires and penchant for murder drove the film to its bloody climax.

Though it certainly helps audiences of Pearl to have seen X in order to enjoy a slew of the through lines West has so gloriously referenced here – that film’s pornography temperament mirrored in an opportunistic film projectionist (David Corenswet) or that X literally marks her spot when she steps onto the stage for an unforgettable church dance audition – the filmmaker and storyteller is intelligent enough to craft Pearl as its own entity.

Given what we saw of Pearl in X, her dancing aspirations and sexual aggressiveness are all the more understandable here.  She wants to be a star – the aftermath of the aforementioned dance audition is actually quite heart breaking, before we’re reminded what type of camp-adjacent horror film we’re watching – and it’s her homelife that lays the foundation for her eventual snap from reality.

Her mother disagrees with her desire to be famous, reminding her of her place as a woman responsible for care and labour.  There’s the notion that her mother (Tandi Wright, who also served as X‘s intimacy coordinator) has resigned herself to this life and wants to stifle Pearl’s own aspirations as punishment for not being able to follow her dreams too, but as stern as she is, Pearl’s murderous tendencies eventually come to light; before we get to her actually inflicting pain onto another human, we see glimpses of her brutal nature in the merciless killing of a rogue goose (this shot particularly grand as it accompanies the title card) and the way she so casually drives her wheelchair-bound father to the edge of the farming swamp pier.

The physical events themselves in Pearl are admittedly quite slight, but everything that fills the screen in each frame means you’re never wanting for more.  Goth is such a force here that it’s difficult to scold her for her wicked ways.  The way she toes the line on either side of sanity is a beautiful thing to behold, and her gradual descent into mayhem is solidified in arguably two of the film’s best sequences – one in an unbroken monologue as she confesses being scared of her own thoughts to her unsuspecting sister-in-law, the other closing out the film as she greets her husband from his war duties with a strained smile amongst a dinner set-up of propped decaying bodies and maggot-infested food.

Next to Goth’s stunning envelopment of the character are the production elements that keep the film visually and audibly arresting.  Whereas X embraced its dark nature and muted moonlight tones, Pearl is a kaleidoscopic candy coated nightmare disguised as a daydream.  Sky blues and blood reds pop against Tyler Bates‘s swelling orchestral score that evokes the film’s flirting with a more classical musical temperament.

A different beast entirely to X, Pearl could alienate viewers expecting a horror film that leans into tradition.  A Ti West horror film will never play by the rules of mainstream so, hopefully, genre enthusiasts aware of what it is to watch a West (or A24) production will be more susceptible to the fact that Pearl is a demented character study rather than a slasher film.

Already a surprise twofer, West and Goth’s partnership is truly the gift that keeps on giving as the closer here reveals the 1980’s set, VHS-aesthetic of MaXXXine – presumably about Goth’s X survivor’s move to the land of adult filmmaking in Hollywood – is on the way.  We probably don’t deserve such deranged goodness, but I, for one, will embrace it all the same.

Pearl is screening as part of this year’s Toronto Film Festival, running physically between September 8th and 18th, 2022, and digitally from September 13th.  It is scheduled for a North American theatrical release from September 16th, 2022.  An Australian release date is yet to be announced.