As Scream, the hotly anticipated fifth instalment in the acclaimed horror series, arrives in Australian cinemas today (read our review here), Peter Gray sat down (virtually, of course) with the cast of fresh blood.  Melissa Barrera, Jack Quaid, Jasmin Savoy Brown, Mason Gooding, Sonia Ammar, and Mikey Madison were all on hand to chat with Peter – in between him fan-boying out – about how it was joining such an iconic franchise, their relationship with horror, and working with the original cast.

To say I’m a fan of this series is an understatement. I just want to say how proud I am of what you have achieved here.

Melissa Barrera: Thank you! You have no idea how that makes us so happy.

Jack Quaid: We both literally just collapsed (in our seats).  Thank you.

The films were incredibly formative to me growing up, and I put this to the both of you, what was your relationship with the original film and the series in general?

Melissa Barrera: I watched the first three films when I was about 11 or 12, when I was obsessed with scary movies.  I’d have sleepovers with my friends and lock ourselves in our rooms because we weren’t allowed to watch R-rated scary movies, obviously, but that’s what we wanted to do.  I remember watching Scream and finally realising “Oh, the popular Halloween costume I’ve seen since I was 6… that’s where it comes from!”, and immediately I was enthralled with it.  It really sent me on an obsessive binge of all scary movies.

Jack Quaid:  I have a weird history with the Scream franchise.  I have a very distinct memory of being 4-years-old and I’m trick-or-treating in L.A. for the first time.  Every other kid is dressed as Ghostface and, at the time, it scares the hell out of me.  I remember this one kid had this Ghostface mask that was kind of translucent and you could pump blood into it that would drip down… terrifying! It scarred me.  I was like “Nope”, no scary movies for me for a while.  I was a big scaredy cat.  I was very literal as a kid.  I remember going to Disneyland and seeing “Snow White’s Scary Adventures” and I’d not go there because it said it was scary.

As a teenager I started getting more into them.  Peer pressure at sleepovers, as (Melissa) said, watching stuff like Shaun of the Dead and getting to Scream and realising that it was hilarious and commenting on itself.  It gave you the keys to the genre.  I think it made a lot of horror buffs. 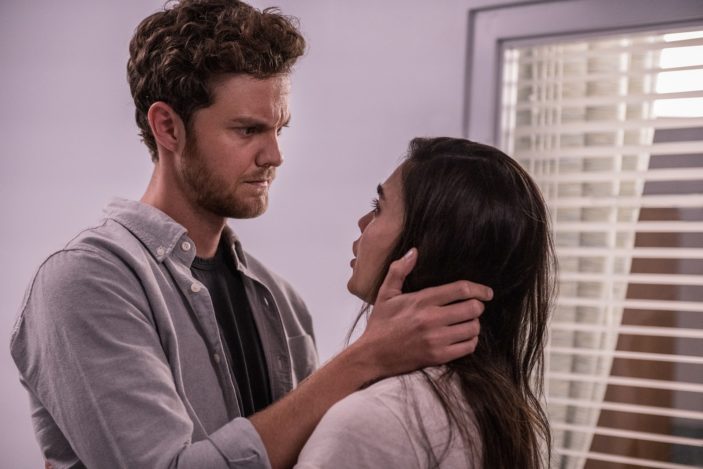 Without delving into any spoilers, these characters are tied to legacy characters.  When you first read the script, what was your reaction when seeing what Matt Betinelli-Olpin and Tyler Gillett had created in rejuvenating these films?

Melissa Barrera:  I thought it was brilliant.  I couldn’t believe they did this.  Doing a fifth instalment in a franchise… the higher the number, the harder it is to keep it engaging and real, and to keep it fresh.  I kept thinking “Wow, how did they do this?”  I just ate it up.  I finished the script in like an hour and a half.  I was meeting with the directors and the producers and the writers the next day and I was so excited.  I binged-watched all the movies.  It’s amazing how they tied this together.  I just kept thinking I hope I get to be a part of it.

Jack Quaid:  I was just really excited when I read it.  Again, hats off to Matt and Tyler.  When I first sat down with them and they explained how they were going to make this all happen, it just blew my mind.  They’re so smart and they know this material.  They eat, sleep, breathe Scream.  They’re the perfect guys to do this.  I’m just so happy to be a part of it.

And Sonia and Mikey, one of the great things about your characters, Amber and Liv, is that, like so many of the female characters that have come before in this series, they’re strong, they’re confident and they don’t take any shit.  How was it for the both of you joining a series dominated by so much female empowerment?

Sonia Ammar:  That made me want to do it even more.  I loved that aspect.  The fact that all the female characters in this film are strong and badass and cool, they carry the movie in a sense.  It makes it all the better.

Did the original trio of Neve Campbell, David Arquette and Courteney Cox pass on any words of wisdom to the both of you?

Mikey Madison:  I don’t know if there was anything specific, they were just very warm and welcoming, and we could tell how important these movies were to them.  It was really important to us as well.

Sonia Ammar:  I remember them saying it was touching to them to see how much we cared about the film.  The energy coming into it, which I thought was a great compliment.  I felt nervous to have that pressure to do it justice, to be a part of this, to make them happy with the movie.  Overall they were so supportive and just made us feel a part of the Scream family, the Scream world.

One of those staple ingredients you hear about with these films is multiple scripts and things being intentionally filmed for misdirection.  Was that something that carried on in this film?

Mikey Madison:  Yeah (laughs).  Everyone had different scripts.  Everyone was comparing, asking “What ending did you get?”  It was strange.  I don’t think we’ll ever do another movie where we’ll have that type of experience of not knowing how it’s going to end.

Sonia Ammar:  Yeah, (there was) that added layer of mystery.  Keeping the secret of what happens.  Not knowing if we could talk to each other about it.  Little by little we started realising we had different scripts.  It made us feel that we’re like the spectators as well. 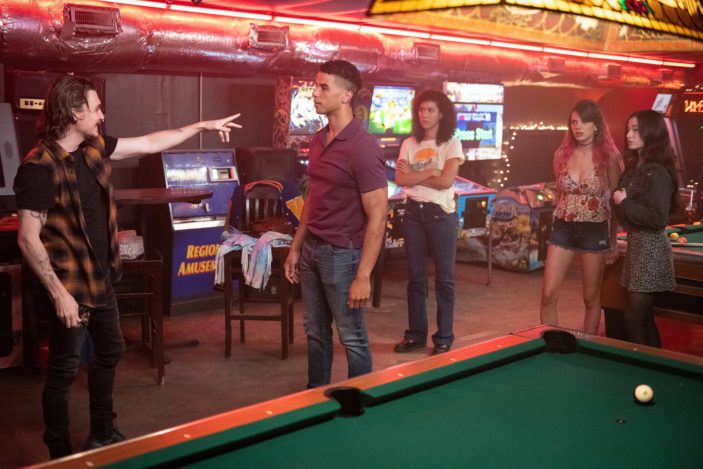 And Sonia, I know this is your first major feature film.  How was that experience for you?

Sonia Ammar: I just feel so grateful.  Years ago I wrote it down in a notebook, I manifested that I wanted my first film to be a horror film.  And I can’t believe it happened.

Mikey Madison:  You should write down more things!

Sonia Ammar:  I still have to pinch myself.

Jasmin and Mason, I don’t want to assume you have an affection for horror movies, because you hear of actors that film them but don’t like them, so what is your relationship with the genre?

Jasmin Savoy Brown:  That’s funny.  Ok, I love a psychological thriller.  I love filming a horror movie, but watching them? I can’t.  I hate violence.  I hate seeing violence.  Even in our movie I have to turn away when people get hurt.  It’s fun to film them.  I love exploring darkness.  I don’t know if that makes sense but it does to me.

Mason Gooding: Certainly makes sense to me, and it juxtaposes my views of horror as a form of entertainment, for no other reason than it’s just exciting.  It’s such a visceral form of entertainment that I get to feel… usually by myself, because that’s when it’s at its most pure form.  Whether it’s movies, books, video games… if it’s scary I tend to gravitate towards it.

Your characters are tied to Randy, arguably one of the series’ most beloved characters.  Do you feel any pressure carrying on the Meeks name knowing fans may be watching you closely?

Jasmin Savoy Brown:  Yes, when I think about it, so I try not to think about it.  Whilst we were filming I wanted to make sure it’s clear that there are nods to Randy but that we aren’t copying him.

Mason Gooding:  I feel exactly the same sentiment.  You don’t want to feel as if you’re copying because that can be virtually disrespectful.  You want to pay respect to an incredible performance but make it your own at the same time. 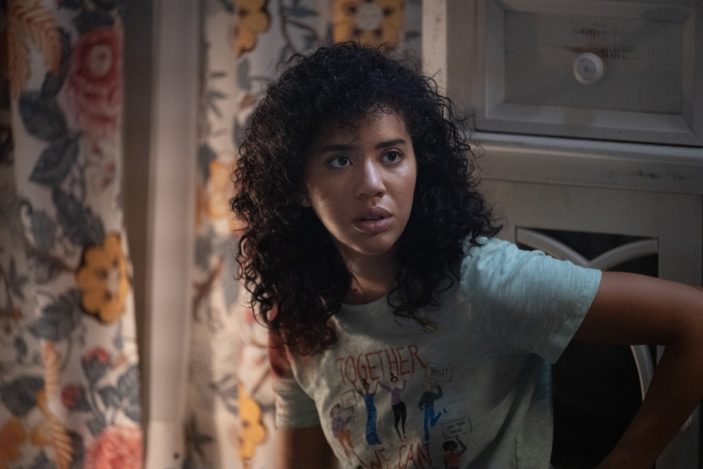 Jasmin, your character Mindy gets one of the great monologues of not just this film, but the series as a whole.  The “requel” monologue? Insane!  How was it reading the script for the first time?  I can only imagine it kept you guessing throughout?

Jasmin Savoy Brown:  Oh, it was so fun.  And when I read that monologue I was so excited.  I’m truly a little theatre nerd at heart, I love a good monologue, because it’s scary and I love to be scared, which I realise is in opposition to what I said before (laughs).  It was really fun doing that scene because it was just like me doing a one act play for (everyone) all day long, and they were so encouraging.

Mason Gooding:  It was an entire day…

Mason Gooding:  And Jasmin, from sun up to sundown was just performing and all we did was sit and listen, and she knocked it out of the park.  Same amount of energy from start to finish.  It was truly remarkable.

I mentioned earlier how proud everyone should be of this film.  Watching it just filled my heart with so my joy, being taken back to watching the first film as a 12-year-old.  Off the first film, how was it having Neve Campbell, David Arquette and Courteney Cox on set for you?

Mason Gooding:  I mean, talk about walking amongst giants.  Their reputation certainly preceded them, and when it came time to being on set they were nothing if not entirely gracious and kind.

Mason Gooding:  Incredibly insightful as to how the franchise has been up until now and what we can do to keep that aspect going.  Hopefully that pays off when you watch the movie, that we’ve done the due diligence to pay respect to what’s come before as well as making something new.