Primarily known for his television work on such series as Outlander and A Discovery of Witches, Scottish actor Steven Cree is trading in the fantastical for the fearful, headlining the twisted horror film The Twin alongside Discovery… co-star Teresa Palmer.

Cree stars as a husband who relocates with his wife to the other side of the world with their surviving son in the hopes of building a new life following the tragic death of their other child.  What begins as a time of healing in the quiet Scandinavian countryside soon takes an ominous turn when his wife begins to unravel the torturous truth about her son and confronts the malicious forces attempting to take a hold of him.

To coincide with the film’s release on Shudder, Peter Gray spoke with Steven about his reaction to reading The Twin‘s twisted script, his own affection for the horror genre, and how being a father separated from his family fuelled his intense performance.

I really don’t know where to begin with this film.  The Twin is one of the movies that I was unaware of where it was going and it seemed like one twist just isn’t enough!  What was your first reaction to reading this script?

You know, funnily enough, Teresa Palmer had initially been offered (the film) when we were still working on A Discovery of Witches.  She had spoken about it with me and she actually thought I would be a great for (the role of) Anthony.  It was the middle of lockdown, we were away shooting in Wales, I had been away from my family for a little while…I wasn’t thinking about getting on to another job.  I kind of listened but didn’t really pay attention, but as it happened when I got cast in the movie it was because the (original) guy who was playing Anthony had to pull out last minute, so Teresa put my name forward and, fortunately, the filmmakers said yes.

When the script came my way, straight away as I was reading it I understood why Teresa thought I was a good match for Anthony.  I felt a connection.  Sometimes you read a script and think “Okay, I understand this character, and I was reading it, and possibly like yourself when you were watching it, I thought “Oh, this is happening…and this is happening.” I think deliberately (director) Taneli (Mustonen) paid homage to classic horror movies, and I was really loving that.  I thought I knew where it was going, which was one thing, but then it totally and utterly blindsided me which, from my point of view, made it all the more interesting.

Because of that rather unexpected ending, stepping away from The Twin for a moment, are there any twists in film narratives that you hold in quite high regard?

You know, annoyingly, The Usual Suspects.  I was about to say The Sixth Sense, but someone told me the twist before I saw it.  The Usual Suspects I did not see coming at all.  I remember that as he just walks out at the end, and I was like “What?!”

I think I had just gone so long without watching it and I had just heard people talking about it, and maybe I even asked what the twist was, but then I thought I really wish I had seen that without knowing that.

Is the horror genre one you hold quite an affection for? You hear about so many actors working in horror that actually have a dislike of it.

Oh no, I love it.  I’ve loved it since I was a kid.  I’m even noticing it with my daughter, and she’s only 4, she loves hearing scary stories and me reading scary stories.  She loves pretending to be scared of monsters.  It’s that thing where she wants to be scared, but then she’s scared of being scared (laughs) and I think that’s what horror taps into.  I remember being 10 or 11 and I watched Nightmare on Elm Street 3, and I had nightmares for months.  I couldn’t close my eyes at night.  But I couldn’t help but go back for more.  So when I rocked up to the house (in the film) for the first time, to me I was like “Wow! I’m in one of those American horror movies.” 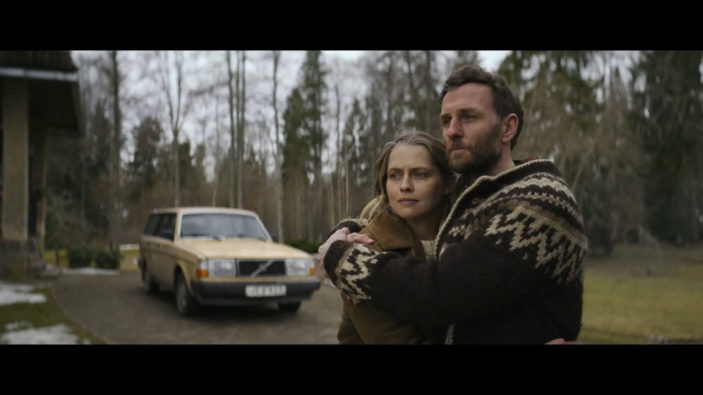 Having worked with Teresa before, that obviously helped you coming on to the project as late as you did in cementing a rapport with her.

Yeah, massively.  We had an immediate chemistry and an immediate understanding of each other.  Also, it was odd in a way because in Discovery of Witches we play two entirely different characters.  The dynamic was that my character loved her from afar and it was never going to happen and he’s always joking.  My character was like the comic relief.  In this, the dynamic between our characters is obviously entirely different.  Normally on jobs, in between takes I’m fairly relaxed and I like to have a laugh.  I found on this it was much harder to switch in and out of that.  I was a lot quieter and more introverted.  It was very useful but an entirely different experience.

And you filmed this in Finland and Estonia?

It’s actually all filmed in Estonia.  It’s made by Finnish filmmakers.  I didn’t know this, but Tallinn, the capital of Estonia, is 45 minutes by boat from Helsinki, so they film in Estonia a lot.  Probably for tax reasons, but a lot of Estonia can double for Finland.  A lot of the crew were Finnish and, as you can see, the cinematography in the film is stunning.  There’s so many great locations.

Did you get to enjoy any of the locations? Or did COVID protocol prevent any of that?

(Laughs) Enjoy should be said with inverted commas.  When I first got there, Estonia hadn’t really been in lockdown, annoyingly it went into full lockdown as I arrived.  So (I had that) first week of isolation when I got there, and when the day came that I could walk around, and this is no exaggeration, it was minus 30 degrees centigrade.  Even by Estonian standards that’s pretty cold.  I left my apartment block and after about two minutes I just thought “Fuck this!” and I went back in.  It was so cold.

Your character is one dealing with grief and loss, is there anything in particular that you tap into to channel that? Being a parent, I imagine, could help that?

Totally.  I knew because of COVID I wasn’t going to be home for about 2 months.  My wife and I knew that because of her work and the restrictions that we weren’t going to get around being apart for that long.  Taking the job was a big decision.  As it turns out being away from my kids for 2 months was even harder than I thought it was going to be.  It was very isolating out there.  Being in the mindset of a parent whose child has died isn’t something you want to think about, but having a child and being separated from them was really hard.  That probably made me a bit insular, which, in quite a perverse way, helped my character decisions and bleed into that character mindset.  And maybe in some fucked-up actor way I enjoyed being that miserable.

The Twin is now streaming on Shudder.