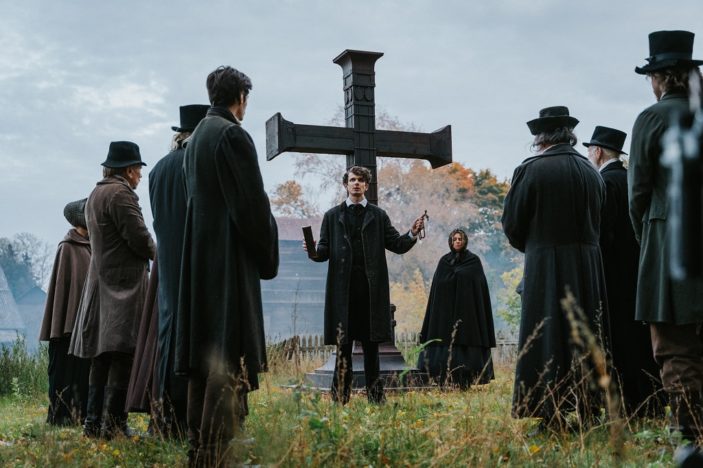 As the Edgar Allan Poe-inspired Raven’s Hollow begins to haunt horror streaming service Shudder just in time for the spooky season (you can read our review here), Peter Gray spoke with writer/director Christopher Hatton about navigating gothic horror, what he hopes Poe purists will take away from the film, and their own personal connection to each other through the film’s lead actress.

I’m a horror fan through and through, and Shudder has basically been the little streaming service that could at this point.  Before I get to Raven’s Hollow, is the horror genre one you’ve always had an affection for?

I wouldn’t say it’s (something) that I have always had an affection for, but I’m one of those guys (who) likes everything.  I like sci-fi, fantasy..as a really young kid I was watching everything, (though) I probably stayed away from horror, partly because it wasn’t as available to me.  But I remember watching Alien and just being delighted at being scared, and now my view on horror is currently that I think it’s an incredibly fertile genre for telling interesting stories.  When I think of horror I don’t just think of jump scares or gnarly body horror.  I just think I can kind of do anything.  That’s why I like it very much.

Is that why when you ventured into horror you went for something like Raven’s Hollow? Yes, it has its jump moments and some blood and gore, but this is a story that has a little basis in history and gothic lore.  Is that why you chose this over something more in tune with a slasher?

It wasn’t a question of I was looking for Raven’s Hollow per se.  I’m a writer and I’m always looking for a good story and I tripped over what I thought was a great opportunity for a story.  Why did Edgar Allan Poe, who was a West Point cadet – which was completely new information to me and quite delightful information (at that) – how did he go from being a cadet to being court marshalled?  Oh, it’s a mystery? Oh, great, I can tell a story there.

And telling Edgar Allan Poe’s story would be interesting to do as a straight biopic, but, to me, it’s got to be horror, and what’s more fun than putting Poe in a horror that tells how Edgar Allan Poe became “Edgar Allan Poe”.

Was Edgar Allan Poe someone you had extensive knowledge of?

Probably not any more than anybody else.  I’d read any number of the pieces and certainly was intrigued by the guy.  His work is absolutely compelling.  When you dive into (him) you understand why he is one of the greatest American writers.  Truly, he’s a lot more than that image that we all got in school (that) kind of weird looking guy with a skull who wrote “The Raven”.  There’s just so much more to (him).  I just knew some of the stories and I liked them very much.  And who wouldn’t be intrigued by him as a figure?

In the casting of your film, I’ll have to get to someone you worked with here who I went to school with many moons ago.  Melanie Zanetti.  She’s just the loveliest person and it’s so great seeing her in film, because I always knew that’s what she was going to do.  I believe you worked with her before this, so did you always know you wanted her for this role?

(Laughs) So, first, dude, I gave her her first movie role! I had been looking for somebody who could play a teenager, but you can’t really cast a teenager and that’s a battle in itself.  Maybe you can cast a teenager, but it’s better to get an adult who looks like they can play much younger, so I was asking around and I had been searching really hard.  Someone then turned to me and said “I know this person.  She’s a theatres actress in Australia.”

I looked her up and there’s these images from the production of Romeo & Juliet, and I was like “No, no, no, this is a child!” (laughs) and he’s telling me she isn’t.  I thought she was like 12 or something.  (But) I ended up casting her back then (for Battle of the Damned) and, of course, that was it for her.  She’s hooked by film and television and we stayed good friends.  She’s the real deal.  Super talented, and it’s just a happy coincidence that my super talented, great friend was genuinely perfect for this role.

If you want that archetypal, Gothic female figure? She loves it.  And, unbeknownst to me, she desperately wanted to do a gothic horror film, so we were just having a great time out there.  There was one night doing the scene where she’s outside in a nightgown and it’s freezing cold and I was feeling so guilty.  I was constantly running out to her asking if she was okay, and she was always “I’m fine.  I’m fine.”  Later on she told me I was crazy because this is what she lives for.  She’s a wonderful person and a great talent.

Oh it was so awesome to see her in this!

How long have you known her? 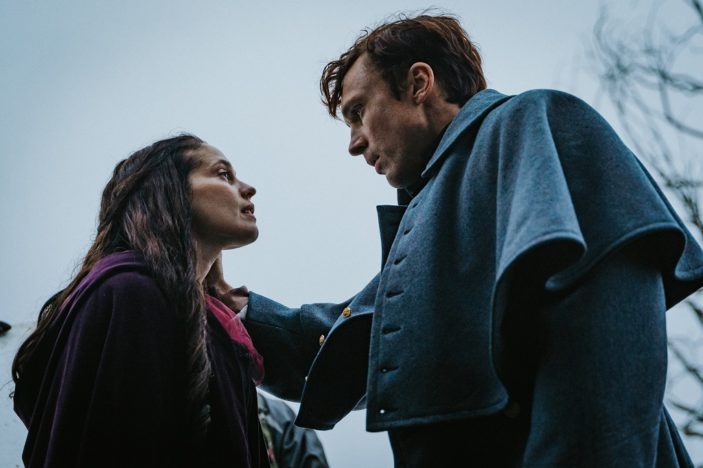 As you mentioned about filming outsider with her in those scenes, and it always seems to be the way that horror sets or productions often have strange occurrences happen.  Was there anything that took place that was a little strange? Or was it quite a happy set, despite the dark material?

Well, I’d love to spin a yarn for you (laughs), but the fact is it was a wonderful experience.  We were in a COVID lockdown, and we lived out there all together in Raven’s Hollow for the duration of that shoot and became like a real family.  I know that sounds cliché, but it’s a great cast and everybody got along.  Everybody was supportive of each other.  It just felt good early on.  I mean, you get exhausted and, of course, you have moments where people are grumpy or whatever, but it was a wonderful shoot.  We were 40 miles away in the country and it was so still and quiet and kind of beautiful.  The atmosphere was perfect for filming something like this.

You had this premiere at Fright Fest too.  How have you found the film’s reception so far?

Happily, very positive.  You really have to prepare yourself for some horrible body blow criticism (laughs), but, knock on wood, it’s been all positive to date.  We played in Germany a couple of days ago and the response was tremendous.  It’s all very exciting and a relief to me, because it suggests there’s an audience that will appreciate and understand it.  But it’s also just good for everybody who worked on the film so hard.  It’s sad when people don’t like what you’ve done because you’ve worked so hard.  It was a pleasant and pleasurable shoot, but it wasn’t an easy shoot.

Let’s hope the Poe purists don’t come for you.

Well, you know, hopefully they will respond to it with the understanding that it’s a fanciful tale.  Hopefully they’ll appreciate from that standpoint that it’s not pretending to be a true biopic.  It’s just meant to be a fun thriller.

Yeah, sometimes a movie is just a movie and audiences can chill out…

Chill out a little bit (yeah).  What I’m most interested in is when this hits a wide audience I’ll be curious to see how people take the third act and, particularly, that climax.  My sense is that if we got it right, no one’s going to be ahead of us to really see that ending coming.  Without giving too much away, I think we’re breaking a few rules.  Maybe not rules, (just) expectations.

I think that’s a testament to everyone who has worked on the film, that it’s all come together the way it has, and to see a creative mind free from being stifled – which seems to be Shudder’s way – is always promising too.

(Shudder) were fantastic.  There’s just a tremendous amount of trust on their part.  They were absolutely monitoring everything, but they weren’t meddling.  They asked the right critical questions at the right moments, making sure they were on top of (everything), but they’ve just been so great to work with.

Well, I have to extend my congratulations to you on the film and, of course, on giving Melanie her break when she needed it.

She was always going to get it.  She was so busy doing theatre that I don’t think (film) occurred to her, but she’s so fit for film.  I think it’s hilarious you went to school together.  When you see her next you can tell her she was really difficult to work with and I’m a masochist for casting her twice (laughs).  No, she’s a dream.