Interview: Nobody producer Kelly McCormick on being a female voice in a testosterone-filled genre

Following its box office success in the US – the film topped the North American chart as one of the few films to maintain a cinema-only rollout – Nobody is planning its Australian unleashing on April 1st (no joke!).  In relation to the film’s release (you can read our review here), Peter Gray chatted with its producer, Kelly McCormick – a power player in the industry who has brought such defining genre titles as Atomic Blonde, Deadpool 2, and Hobbs & Shaw to the big screen – discussing Nobody‘s origins and why she loves the action genre so much.

It must be great to be able to talk about a film that’s getting a theatrical release in the US. I understand the intention was always for it to go to cinema.  There wasn’t any streaming chatter?

That’s right, yeah.  Universal have been very bullish about this being a theatrical release. And they’ve been really thoughtful in these times where we’ve had to bounce around the release dates and getting eyes on the film.  I think it’s time for there to be new things for people to see who are lucky enough to go to the cinema.

How did Nobody come about for you?

So it was Bob’s (Odenkirk) idea. It originated from a situation he experienced where he wished he handled it differently.  Derek (Kolstad) was his dream writer, and we (McCormick and producing partner David Leitch) were someone he wanted to work with, so we trained him early in order to get the action that he wanted in the picture.  And Ilya (Naishuller) was his top choice for director too, and, honestly, someone we wanted to work with, so it was kinda like this dream project of all the people involved.  And then you have this idea of this complex, complicated, layered character going on a relatable journey that we can throw action in to heighten.  It’s the perfect package.

I was going to ask how did Bob Odenkirk come to be the choice for this, but clearly he was there from the get go.

He was there from the get go.  How inspired though?! When I heard the logline and knew Bob was involved, I was like “Yes!”.  It’s so bizarre but that’s what makes it so unexpected and great.

Because he’s a producer on this as well, how collaborative is that experience?

Incredibly collaborative. The filmmaking group is honestly one of the greatest I have worked with.  Everyone knew what type of movie they were making from day one.  Everybody was additive and wanted to collaborate for all the right reasons, and that’s just a dream.

I have to ask how did Christopher Lloyd become involved in this? I haven’t seen him in anything in a long time and seeing him in this, as well as what he gets to do in this, was so exciting.

I know, it’s so cool! I think that was actually a Bob idea.  It was kind of last minute and out of the blue because we had been focusing on so many other characters, and then we were thinking “Who’s going to be Bob’s dad?”.  It was hard to think of and I think we were avoiding it, and then Christopher Lloyd just popped up into our collective ideas and it was just “Oh my god, yes! What a brilliant idea, run don’t walk”.  We were hoping he wanted to come play with us and he did, and he delivers!  His arc is actually very much like what you want as a fan of his, you’re like  “Where you been Chris?”.  I love him, he’s amazing. 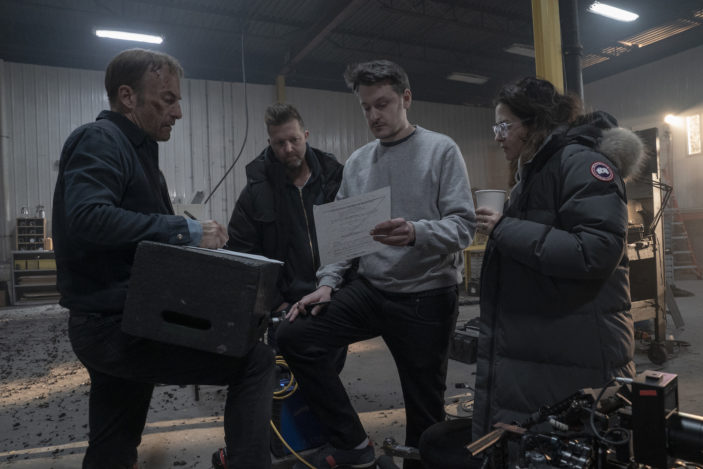 Is there anything that you specifically look for when you’re looking at scripts?

You’ve produced some big action movies.  Deadpool 2, Atomic Blonde, Hobbs & Shaw…but then you’ve counteracted that with stuff like Shark Night and Poms.  Is it a conscious effort on your part to work with such varied projects as opposed to just focusing on one?

Shark Night and Poms were from a former life.  I used to work for a company that did foreign sales financing and I was the curator of their slate.  Simultaneously, I managed David and Chad (Stahelski) and found them the John Wick script and helped them get into that world as their manager.  The two jobs ended up being so big that I had to choose one, and I chose the action space.  I came from independent so it was an accident that I fell in love with stories I would consider “action adjacent”, but I’m really trying to stay branded in the action lane.

I really loved the suggestion of Connie Nielsen’s character’s mentality towards the end of the film, and, to me, it really leaned into the fact that I feel that so many of your films have a strong female sensibility.  Charlize Theron (in Atomic Blonde), Vanessa Kirby (in Hobbs & Shaw), I believe you have Mary Elizabeth Winstead headlining an action film too…is the female empowerment angle something you have sought out specifically?

Yeah, it’s really important to me.  I have this unique opportunity to be a female filmmaker behind some of the biggest action films in the world.  I owe it to my kind as much as possible within a very testosterone-filled genre.  Connie really brought it in this movie though.  When you start the film and you see this very complex relationship, you’re right there with them.  They’re not on their best terms.  You can play that in a way that’s particularly cold and icy, but she found a way to play it with a lot of love and a lot of warmth.  That’s how their (Bob and Connie’s) arc is believable in my opinion.

I read somewhere that Bob Odenkirk had been training for this film for 2 years.  He’s obviously had it in his head for a long period of time, but how long has the film itself been an actuality?

Really only about 3 years.  And that’s including making it and right now, but the truth is he’d been wanting to train long before we even had a script.  We hooked him up with (martial artist) Daniel Bernhardt, who’s in the film too, he’s one of our guys at 87North, so whenever they found moments to do things together they would, and then Daniel would send Bob off with programs he could do before they’d see each other again.  It was an extraordinarily long process, but that discipline is what we hope for every time.

As you said, Ilya Naishuller was the only director wanted for the film.  I only know of him because of Hardcore Henry.  How did those conversations start regarding his involvement?

I have been such a fan of his for years from his work in Biting Elbows.  Ilya is so special and I can’t wait to see what he does moving forward.  It was such a bold choice for his first English language film be in first person.  That energy, that choice is what got him this job too.

Nobody is screening in Australian theatres from April 1st, 2021