Nearly 20 years after it was released, The Matrix still remains a culturally relevant blueprint for which other genre films are based on.  Breaking boundaries and expectations in the decades since, with such bold efforts as Cloud Atlas and Jupiter Ascending, director Lana Wachowski has returned to the very IP that launched a phenomenon with The Matrix Resurrections.

To coincide with the film’s global release, Peter Gray was fortunate enough to chat with some of the film’s stars, Neil Patrick Harris, Priyanka Chopra Jonas and Jessica Henwick, discussing the secrecy of the film and how it felt to be involved in a project so respectful of gender.

The Matrix was a film that I think was so ahead of its time in the way that it treated women and people of colour.  I’ll put this to both you, Jessica and Priyanka, how was it joining a film that had such characters that were as strong and as intelligent as those you portrayed?

Jessica Henwick: You’re so right, The Matrix was so ahead of the game.  I mean, if you think about it the first one came out in 1999! The level of diversity was kind of unheard of in Hollywood at that time.  It’s amazing that it’s continued that legacy of pushing the envelope.

Jessica, you can correct me if I’m wrong, but I believe you had your own red pill/blue pill moment of The Matrix Resurrections and Shang-Chi being offered to you at the same time?

Jessica Henwick: Not offers.  I had auditioned for both, and they wanted me to do an official screen test (for Shang-Chi) and the thing about screen tests is you have to sign a contract before you go.  They knew that I had this offer (for The Matrix) so essentially I had to choose one and I knew I couldn’t audition for anything else during that time.  It was a big moment, and I knew that if I chose wrong…well, I wouldn’t be sitting here.

What was you relationship with the previous films?  Your character, Priyanka, had been introduced previously.  Were these films you saw when they first came out? Were they ones you revisited knowing about Resurrections?

Priyanka Chopra Jonas:  I remember watching the first Matrix movie in the theatres with friends and being extremely moved by it and thinking that it was going to change culture.  After I got cast I had to go back and revisit the movies and specifically my character.  I have to say, the fans really helped me in building my character.  I went and googled so many fan theories around (my character) Sati.  It’s hard to understand The Matrix, especially for me, so I was like “Oh, I get it”, and I made all these connections from these fan theories.  I took all the information that I had from the previous one and this one and I built a bridge. 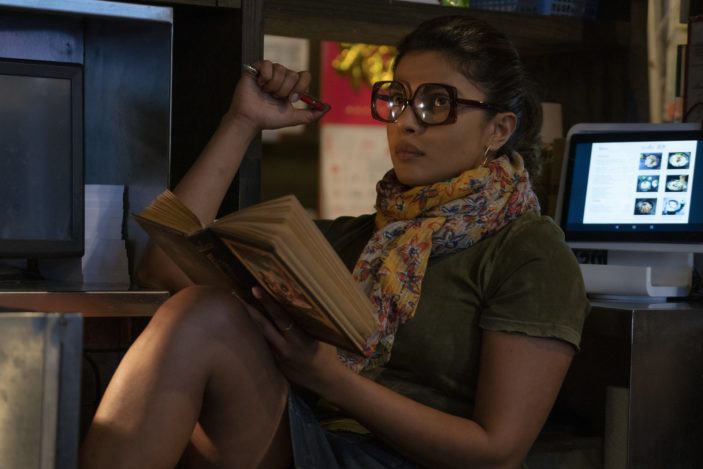 As you just said it is a film that takes a bit of time to get your head around.  When you read a script like this are you able to talk to anyone about it? Do you have a process in digesting the information?

Jessica Henwick: I think every single cast member that I have interviewed with has said the same thing in that they read it over and over and over again.  You couldn’t go and speak to anyone to get any answers…

Jessica Henwick: Because you would just get more questions! So we just read that script like a bible every night.

Priyanka Chopra Jonas: Trying to figure out what the screen direction really meant.

Jessica Henwick: And then sometimes the screen directions would just stop.

We shouldn’t really expect anything less from a Matrix movie though.  Neil, what was your first reaction when reading the script?

Neil Patrick Harris: I was pretty enamoured with it from the get, to be honest.  I applauded Lana’s (Wachowski) authenticity throughout it, and it started with her writing the script and her intentions behind it.  I didn’t want to be a part of anything that felt like a re-tread or scraping the bottom of any type of barrel.  I find this film the opposite of that, it’s contemporary, it’s new, it’s meta…it’s a conversation that we’ve been having for some time.  To couch that conversation of a 2021 technology shift in a conversation of a love story in a conversation that has a deep heartbeat of emotion…that was super cool to me.

I mentioned earlier about The Matrix being so ahead of its time, and you have Resurrections that is so respectful of women and people of colour and sexuality.  Did Lana come to you with this script or did you seek it out?

Neil Patrick Harris:  I didn’t seek it out, but I don’t think Lana really reached out either.  It just kind of wound up happening.  I don’t know the answer to that.  I’m not sure if I was on a short-list of people she wanted…but I did hear that she met with me and was meant to go to other cities to meet with other people but cancelled those trips because she was content with the decision of me.  That could speak to my talent or it could speak to her exhaustion (laughs) but I’ll take the former.

The Matrix Resurrections is scheduled for a release in Australian theatres from December 26th, 2021.