Interview: Idris Elba and the cast and crew of Beast on calibrating fear and shooting in South Africa 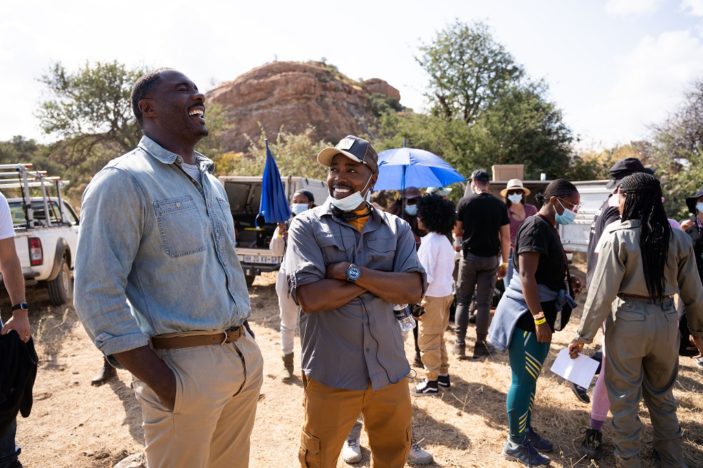 As their nail-biting thriller Beast gears up to roar into Australian cinemas this week (you can read our review here), Idris Elba, co-stars Sharlto Copley, Leah Jeffries and Iyana Halley, director Baltasur Kormákur, and producer Will Packer spoke with our own Peter Gray about creating a familial bond on set, working on location in South Africa, and navigating the correct amount of fear against a CGI lion.

I was looking at the films that you’ve produced, Will, and you’ve been busy these last few decades, I’ll give you that. Going off the films you’ve been involved with it seems like action isn’t the most predominant genre for you. How did Beast come about for you?

Will Packer: Yeah, you know, I haven’t done action on this level before. I’ve done some action movies, I’ve done action comedies. But this was very, very different from me. I was excited about it going in. I love this concept, this idea of man versus beast. I’ve always liked that genre of movie. I’ve always liked the survival thriller. So having a chance to do my own as a filmmaker was exciting. You know, I knew it was going to be challenging telling a story like this. One of the reasons that we went to South Africa to shoot instead of shooting in the States on a soundstage, was so that it could feel really real and authentic. And I think we accomplished that. The lion is the only thing that’s CGI in the movie, everything else is real.

The way that that Baltasar filmed it in those continuous shots, it really brought out an immersive feeling.  As you said too, because everything is so real, it like makes the tension that much more palpable. I commend you on making everything as real as possible, except for attacking Idris Elba!

Will Packer: By the way, even that feels real! I’m telling audiences this is the type of movie that you go to the cinemas to see.  We’re all used to seeing things, you know, streaming on our phones everywhere else, (so) you want to see this on the biggest screen possible.  The biggest format.  Because that’s where the lion, the ferocity of the lion, and Idris… just the nature of that fight (and) the really carnal nature of these action scenes, they really play really well when you see it in theatres. For me, that was one of the reasons I wanted to make this movie. It’s not a comic book movie. It’s not a fanciful, unrealistic movie. It’s very grounded. It’s something that I think audiences are ready for.

Was it challenging for you, Idris?

Idris Elba: The biggest challenges were just figuring out and sort of calibrating the level of fear.  This is a man that doesn’t fight, he can’t fight, let alone fight a lion! There’s this moment where it was designed that I punched the lion, and just looking at that I’m thinking “I’m not sure how this guy is going to punch a lion”, (so) there are these things that we had to dissect and understand.  I was conscious that this isn’t an “an action hero guy”.  This is a normal guy that just can’t fight, so, for me, those are difficult areas to layer in and make feel believable.

Will, you’ve worked with Idris before on a few films now, so was there a certain level of comfort going into Beast knowing that he’s going to be involved?

Will Packer: No question! This is his and I’s sixth movie together.  We’ve been very successful.  Of those previous five, three opened at number one, so that’s huge! And we’ve got a shorthand (and) a mutual respect and love for each other.  When I call him and tell him “I’ve got an idea” he takes it seriously, because I don’t call him all the time.  I know the types of things he likes.  I love his work and his skill set. I know that he can do anything, but I’m very specific about the things I approach him with.  So when I told him about this concept, even before I had a director of the final script, he said “You know what? Sounds cool.  I’m in!”

Is there anything that you look specifically for when looking at films to produce?

Will Packer: I always think about the audience.  I always think about who I’m making the film for, and who’s going to enjoy it.  I like to make sure that I keep an eye towards that audience.  Even as we go through all the development, as we change the script, I’m thinking about the casting and where we’re shooting.  I’m always keeping the audience in mind first and foremost.  They are the master, so to speak, that we all have to serve as filmmakers.  It’s about the audience (and) how am I delivering something that will make an enjoyable experience for them.

I think that’s been working for you, given the success that you’ve had.  I just have to also say thank you for gifting us Tiffany Haddish in Girls Trip, because that was beyond! She definitely taught us a few things.

Will Packer: (Laughs) Yes, yes, yes.  Agree, agree, agree! She is an amazing talent.  I love the fact that I’ve been able to work with some amazing talent on their way up.  Tiffany, Kevin Hart, even Idris was fresh from The Wire when I first worked with him, so I’m very proud of that fact. 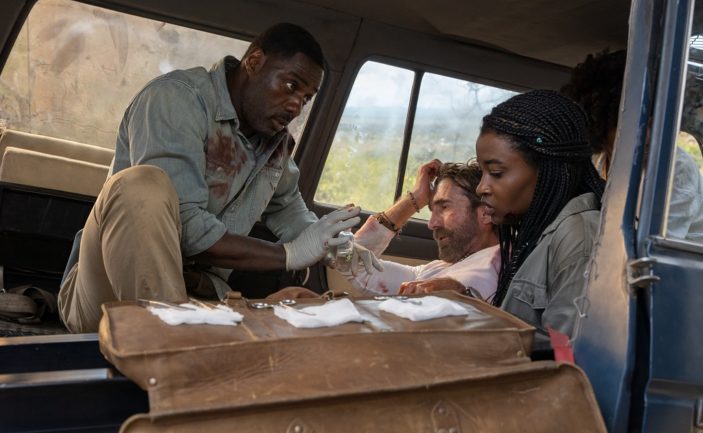 The early sequences really set the emotional tone for the film, between yourself, Idris, and both Leah and Iyana, as well as Sharlto’s character.  Was there much time prior to filming to form such a naturalistic bond?

Idris Elba: We certainly had a lot of time just sitting around the table with the script, talking through each line, talking through the relationships and the characteristics of those relationships.  The time was rich.  (Iyana and Leah) are adorable people to work with, very, very sweet people.  At the same time, we didn’t know each other, so it was important that we spent time (together).  I just made sure that they felt like they could approach me and relate to me as an actor.  And then we just got into it as a bit of a family.  By the time the film finished, we felt like a family.

Sharlto Copley: It’s just great actors that I got to work with.  Three really amazing actors.  That, to me, means they’re just open hearted and vulnerable.  We felt that quite quickly with each other, and I think the audience feels that as well.

And there’s a lot of really fun riffing between the cast, especially in the car where the girls are singing and rapping.  Is there much room for improvisation there?

Leah Jeffries: Most definitely. Because they were such long takes, I think they were just testing us to see what we would add in there.  Sometimes they let you improv to get you to talk in a more realistic way, so it doesn’t just seem like we are reading lines.

On the mention of those long takes, was there any inspiration, Baltasur, behind such a decision to film in such an unbroken manner?

Baltasur Kormákur: Well, the inspiration was more like a feeling that I had. I wanted to find a new way of expression.  For me, creating that immersive and claustrophobic feeling was how I wanted to sell it to the studio, because movies aren’t made like that anymore.  I love The Shining, it’s one of my favourite horror movies, and going down that corridor was such a different thing then.  It’s that feeling of being stuck with them and you know something is coming.  I’m sure subconsciously that’s what it was (for me).  I’d love to make a full blown horror movie in one shot.

What was it about Beast, for you Sharlto, that made you say “I’m going to do this!” You’ve done action movies before, but never really a lot of thrillers.

Sharlto Copley: Definitely the wildlife theme.  The anti-poaching message (here), dealing with that topic, which is obviously a big problem in my home country in South Africa.  The fact that we could shoot on a nature reserve and stay there.  It was basically like being on a paid vacation, as far as I’m concerned.  The Americans on the crew were scared of bugs in their rooms, where I was like “Are you kidding me?” (laughs) I didn’t have to spend $2000 a night on a room.  I can get paid to go and explore the nature.  And then to play a positive South African character? These were just obvious reasons for me to do it.  Plus, Baltasur and Idris are just exceptional talents, and when you have that level of talent, you’ve got a much better chance that the film is going to work.

Was your character always South African?

Sharlto Copley: He was actually going to be British.  And I think (initially) it wasn’t going to be set in South Africa.  It was set in some other country, I can’t remember which, and then when I came on it just became obvious that it should be set in South Africa, which extended then to my character.  He’s the host in the movie, and I was the host to everybody in real life. 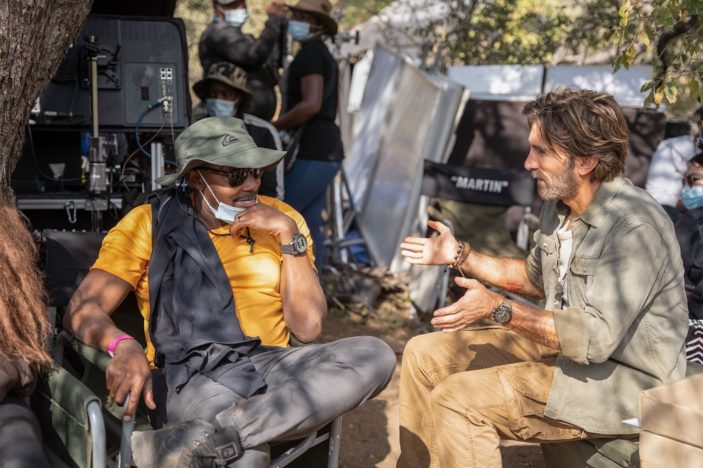 Sharlto mentioned why he thought this was the right time for Beast.  What was it for you, Idris? I believe you had spoken with Baltasur about collaborating on a project for some time?

Idris Elba: I think the element of survival in this film is a big key component to the narrative.  Balt has made some incredible contributions to that theme, that genre, and I just felt like he would find the right tone and temperature to make this film.  (It) does teeter on being a little bit, you know, theatrical with that sense of (a) real survival perspective.  So that’s what I thought (we) could do with this film.

I’m a sucker for these survival-in-the-wild, creature feature movies, and I think we have this expectation it’s just going to be Idris out there.  But Iyana and Leah, you both get in on the action, which I loved! Was it exciting or daunting knowing that you’d be involved in the action side of things?

Leah Jeffries: In the car moments, the lions would be around the perimeter, which I couldn’t see, so in those parts it became a little challenging.  I was scared filming this (laughs).

And you both have such strong reactions to this predicament.  How do you think you would personally react in that type of situation?

Iyana Halley: (Laughs) You know what? I don’t even see myself in anything like that.  I would be crying (laughs) and I’d probably be so loud with the tears and being extra that the lion would find me and just attack me!  It wouldn’t work for me.

Leah Jeffries: I just never would have gotten out of the car in the first place.  I would have been like “Oh, I’m sorry, please press the gas right now!”

Beast is screening in Australian theatres from August 25th, 2022.