Interview: Halloween Kills director David Gordon Green on how classic cinema inspired him and the pressure of taking on an iconic horror franchise

After pushing 2018’s sequel-cum-reboot Halloween to record breaking statistics, it only made sense that writer/director David Gordon Green was handed a sequel to continue revelling in Michael Myers’ carnage.

Not only granted a sequel – Halloween Kills – but a trilogy (Halloween Ends, set for a 2022 release) to boot, Green expanded on the violent mythology of the Myers character, making sure to bring Jamie Lee Curtis’ long-suffering victim Laurie Strode along for the bloody ride.

As Halloween Kills prepares to be unleashed in Australian cinemas, Peter Gray caught up with the director to discuss, in between Jamie Lee interview-bombing the proceedings and fanboying over Your Highness, the pressure of taking on such an iconic franchise, how he first discovered his love of horror, and why we have Jake Gyllenhaal to thank for these latest Halloween films.

I remember when it was announced that you were directing Halloween (2018) and that Danny McBride was writing, and it seemed that the general consensus was that this wasn’t the most obvious choice.  Even though you’re known for directing comedy, you have directed dramas and thrillers, and I think people forget that one genre doesn’t define you as a filmmaker.  Did you feel pressure going into these films?

Pressure in terms of a fan wanting to do this franchise justice – big pressure! In terms of jumping genres and trying a horror movie was exciting.  I look at every project as an exercise to do something different than I have the last time. I can look at this as my first horror movie, I can look at Halloween Kills as my second horror movie, but I want to make it very different from the previous one.  I don’t want to get into a rut.  I don’t want to recreate the same narrative, the same cinematic style.  I’m always looking to do something different, and that’s just a part of the messy life I’ve always lived of always trying to explore myself.

What was your introduction to the horror genre?

It was the taboo of watching the scary movies I could get my eyes on.  My parents were very strict.  I’d watch movies like Something Wicked This Way Comes or Watcher in the Woods that were kid-friendly but had an edge of horror to it, and then movies like Halloween, Black Christmas, Silent Night, Deadly Night…these movies started to appeal to me at an age where my parents were like “There’s no way in hell you’re going to watch The Stepfather tonight”, but I really wanted to so you would invent ways to expose yourself to these things.  You’d buy a ticket to one movie and sneak into another, and that became my formative years.

I think the first “scary movie” my father took me to was Aliens.  This was the first one he said “Let’s (do this)”.  He could see my obsession.  That was one we got to go to and share together, which was pretty exciting.

When making Halloween in 2018, were Halloween Kills and Halloween Ends films that you had discussed? Did you know you were going to get sequels?

Not until the success of the first one.  We had discussed doing multiple movies, and we had so many ideas that we had to push aside to streamline it into being manageable for our time and budget and what we thought would interest the fans the most.  We curated that.  And when that was successful we took those ideas and created a narrative that was a two-part story from Halloween Kills to Halloween Ends.

The mob mentality introduced in this film is something we haven’t really seen in a Halloween film so far, and as a fan it’s always refreshing to see narratives take on a different approach.  What inspired that direction?

A lot of it, again, is my interest in breaking my own rules and trying something new.  I’m a big fan of 1968’s Medium Cool and that was kind of in my mind when we were writing Halloween Kills.  Trying to find new points of influence, as opposed to just being derivative of slasher movies.  Let’s try to find strange commentaries and dig through the archive of films that I love, particularly from 60’s and 70’s cinema where I think there was an effort to challenge the traditions of techniques of old Hollywood.  That was just a fun place to be working from.  How do we be loyal to the fans and the fans of Michael Myers and be able to build and grow off the 2018 version. 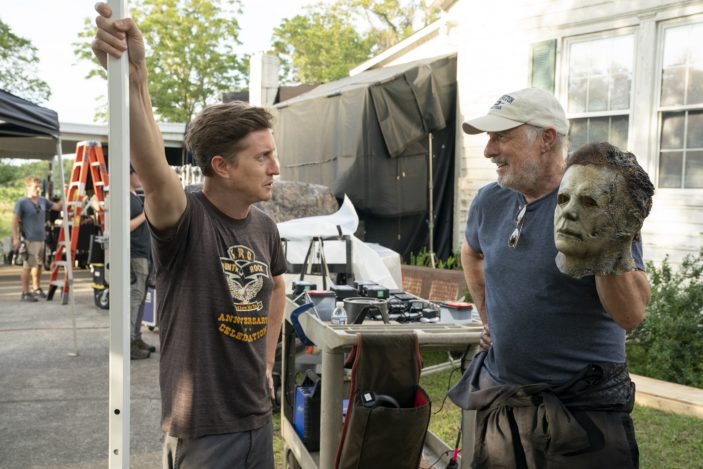 I remember hearing a story from Jamie Lee Curtis about returning to the franchise for H20 (1998) and Resurrection (2001), and she seemed quite final about appearing in Halloween films.  How was it in getting her to return to the franchise?

That was fun.  I had just finished a movie called Stronger with Jake Gyllenhaal, and when I was telling him what I was up to he said “Oh, Jamie’s like my godmother…why don’t I give her a call and put in a good word?”, and I had a script ready that Danny McBride, Jeff Fradley and I had written.  I said “Tell her to give me 5 minutes on the phone to see if I can’t at least convince her to check out the script”.

He was very generous and gave her a phone call and talked through the process of what it was like to work with a weirdo like me, and for whatever reason she decided to take the call and we talked about it.  I sent her the script at 8pm one evening and when I woke up the next morning there was a very flattering response saying “Give me a call and let’s figure out how to get this done”.

When did you and Danny McBride first start talking about making this film together?

He was a year below me in college and we lived two doors down from each other in the dorm rooms.  His VHS collection was a lot like my VHS collection, so we’ve been talking about comedies and horror movies, which are the big highlights of his movie diet.

We would talk about it all the time.  “Some day” and “Wouldn’t it be cool?”, and then when Jason Blum reached out to me about this project, I had a brief conversation with him and immediately rang Danny and said “You won’t believe this crazy email and phone call I just had” and that he wanted me to come to his office to talk about it.  Danny says “I’m coming with you”.  We went to his office and just started spit-balling ideas.  It was like it was those kids in their college dormitory with a class project.  The enthusiasm we had at 19-years-old is still hanging in there in mid-life.

From other directors I have spoken to that have worked with Jason Blum and Blumhouse it very much seems that he’s a producer who doesn’t interfere and lets directors execute their creative vision.  I imagine in the horror genre, which seems kind of notorious for having studio interference, that’s quite a blessing to have.

For any movie to have that kind of support and navigation in the genre, Jason and his team of executives aren’t like the other entities.  Often times I’ll be writing a script and I’ll turn it in and I’ll be dreading the notes I’m going to get.  Here, not only do I invite them I thrive on them.  This weekend I spent poking holes in the Halloween Ends script, I’m having dinner with Jason to do the same and to meet other filmmakers.  It really does become a community of like-minded people who know how to be resourceful.  It’s no lie that he knows how to be economical when it comes to making movies, but that comes with a creative control you can’t get in other places.

Halloween Kills is scheduled for an Australian cinema release on October 28th, 2021.