Interview: Elizabeth Banks on directing Cocaine Bear; “I felt like this film was almost the opportunity to make a revenge movie for the bear.” 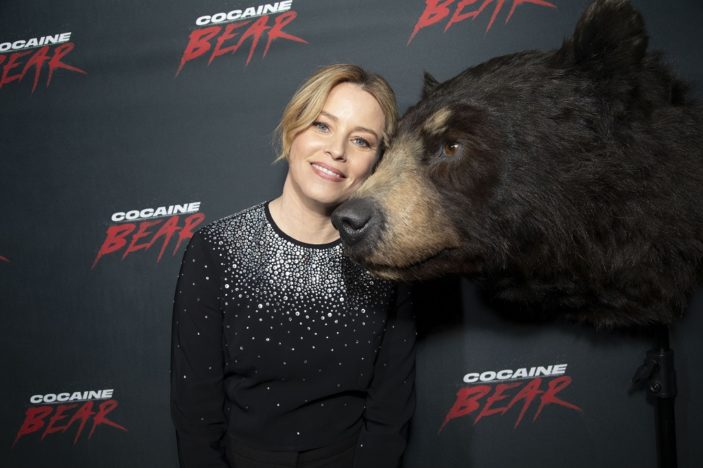 Inspired by the 1985 true story of a drug runner’s plane crash, missing cocaine, and the black bear that ate it, Cocaine Bear is a wild dark comedy that finds an oddball group of cops, criminals, tourists and teens converging in a Georgia forest where a 500-pound apex predator has ingested a staggering amount of cocaine and gone on a coke-fuelled rampage for more blow…and blood.

And bringing this stranger-than-fiction tale to life is one Elizabeth Banks.  Having mastered her comedic talents as an actress, the Emmy nominated star is once again stepping behind the camera for what is to be her most ambitious project to date.

Speaking to our Peter Gray for the film’s trailer launch, she spoke about taking creative liberties with such a wild story, how they created the bear to be as realistic as possible, and working with the late Ray Liotta.

The movie is based on a true story.  How much of what we see on screen is fact and how many creative liberties were taken?

We, of course, don’t really know what happened with this bear in the woods, so much of the situation (here) is imagined.  We took inspiration from the true story involving Andrew Thornton, who was this notorious drug runner who dropped drugs out of aeroplanes for his co-workers on the ground.  He would pick up and then parachute out of the plane.  One night we know this went wrong, and so the authorities knew there was drugs somewhere in the forest (but) it wasn’t until months later when they found a black bear had consumed about 70 pounds of cocaine.  I remember reading this story thinking how sad it was that this bear became collateral damage in this fucked-up war on drugs.  I felt like this film was almost the opportunity to make a revenge movie for the bear.

It really is a stranger-than-fiction story.  Was it one that you were aware of prior to taking on the film?

Yeah, totally stranger-than-fiction! One of our characters in the film, played by Brooklynn Prince, is a 12-year-old in 1985.  I was a 12-year-old in 1985, as well, so I didn’t know anything about this until I read the script.  Then, of course, I did a deep dive into Andrew Thornton, whose character is the impetus for the rest of our story.  He’s the inciting incident.  He has the drug run that goes bad.  I just remember having a lot of empathy for the bear when I read the story.

I have to say that comedy is clearly a genre that you excel at as both as an actor and a director.  Your timing is impeccable. And directing comedy, I imagine can be quite a challenge in projecting that timing, so was it always a genre that you knew that you wanted to explore as a filmmaker?

I mean, so far, it might be the only thing I know how to do (laughs).  It’s my favourite thing to do.  This is my third feature film, but pretty much everything I’ve ever directed is comedic.  It’s what I love.  I love entertaining audiences.  I love characters who are funny and underdogs.  I think when you’re up against a bear high on cocaine it doesn’t matter who you are.  You’re an underdog in that scenario.  That’s what really excited me about these characters.  It felt almost like a Coen Brothers movie wrapped into a Sam Raimi movie wrapped into Jaws!

With all of that, would there be a way to describe what genre the film falls in?

It’s an action, horror, thriller, comedy.  It’s got it all.  What’s been interesting is how unique the movie feels.  I think the script was very unique.  The opportunity was unique.  And that’s why I took it.  I felt as a filmmaker this was a great opportunity to do something specific and unique, and take the audience on a really wild ride.  I also have characters that are fun and full of heart.  There’s actually a lot of heart in this movie as well.

Of those characters, you have Ray Liotta in the mix.  I had the pleasure of speaking to him last year for this role in Many Saints of Newark, and I expressed to him how great I thought he was in more comedic roles.  There’s obviously a sense of bittersweetness to his appearance in this film.  Was he someone you specifically sought out?

Yeah, he was.  When I read the script a couple of actors immediately sprung to mind, and he was one of them.  I always felt Ray would be our drug kingpin.  But he’s also an unfit grandfather, and a father, and, if you can believe it, one of the big thematics in Cocaine Bear is it’s a kind of a movie about parenting.  It’s about taking care of your cubs.  It’s really about fathers and sons, and mothers and daughters, and that was a huge part of what drew me to this story.  I really felt like Ray was going to shine in a role like that.  He was fantastic.  I loved working with him.

Obviously the bear is the star of the movie.  I’m curious about the process of creating the bear with special effects.

So, the bear is fully CGI.  It was created by Weta Digital Workshop in New Zealand.  We had an incredible bear performer named Alan Henry, who was trained under Andy Serkis.  He worked on the Planet of the Apes movies, so he knew how well to movie as a quadruped, you know, walking on all fours.  We used prosthetics, he had to do a lot of stunt work and interact with the actors.  Despite the fact that you don’t see Alan on screen, I feel his presence in every shot of our bear.  There was a whole process before we started shooting where we designed the bear.  Working with Weta on everything from the size and the eyes, to the markings on the bear.

We took so many references of black bears to really create this character.  We have a photorealistic bear that you would literally see in a National Geographic documentary, but we also have a bear that’s consumed cocaine.  That gave us enough leeway to really have fun with what this behaviour might be like.  Every behaviour the bear has in the film is based on real behaviour that we could see in videos of bears, whether it was them eating or laying, we always had a reference point.  There are certain rules with bears you can’t break.  We want to build trust with the audience (too).  You want them to believe it’s real.  I want them on this ride with us, and I felt if one frame of the bear didn’t work, or that trust was broken, then the movie didn’t work.

Cocaine Bear is scheduled for release in Australian theatres on February 23rd, 2023.