Interview: Elisha Cuthbert on filming The Cellar, approaching the horror genre, and her love of Australia

Now streaming on Shudder, The Cellar (you can read our review here) is a haunted house-themed horror film starring Elisha Cuthbert as a mother whose daughter mysteriously vanishes in the cellar of her family’s new house in the country.  She soon discovers there is an ancient and powerful entity controlling the home that she will have to face or risk losing her family’s souls forever.

To coincide with the film’s streaming release, Peter Gray got to speak with Elisha about how the terror translated from script to screen, if there were any supernatural occurrences on set, and how she feels about the resurgence that some of her past work has found on streaming services over the last few years.

It was about 20 minutes into The Cellar that “the staircase” scene happens, and it made me think is there a particular horror film or even a sequence in a horror film that has stuck with you since first seeing it?

Oh wow, that’s a good one.  You know, I keep going back to this one film for reference.  There maybe wasn’t one scene, but I was about 11-or-so, with this film Fire in the Sky.  I remember vividly them driving and they see this fire and then they’re beamed up by this white light…my gosh, I just remember that haunting me for years after seeing that.

When reading a script such as The Cellar, does it ever feel as terrifying on paper as it does when filming or when seeing it in its entirety?

I don’t know if it’s more terrifying than it is that it’s going to play so well on a big screen.  I’m thinking of it technically.  How are we going to approach it? How are we going to make it work?  And, especially with that scene, where it’s one location with my daughter on the line, and then my location at work with her on the line, I was thinking I have to be with her (Abby Fitz) off-camera because that scene really sets the tone for everything that comes after that.  So, I’m more reading with logistics in mind.  How can I approach this so it becomes the best version of this off the page.

The Cellar is one of those films that, for me, I thought I could sense where it was going.  Then, the finale just goes bat-shit insane, which I absolutely love when a horror film flips like that.  Was that your reaction when reading this? That it was absolutely not where you thought it was going to go?

Absolutely!  And there was a part of me that went “I loved that, but are people going to hate that?”  I know I loved it because it was so fresh.  As you said, it got me because I could see where I thought it was going and how this is going to work out, and then when it flipped the script I knew I had to make this movie.  Yeah, without giving anything away, it was a huge moment for me reading it going “Ooh, this is great!”

The house is such a character in itself.  I assume the cellar was its own set too?

Yeah, the house we shot both exterior and interior.  A lot of the hallways, the library, coming down the stairs… we did a lot of the interiors within the house that you see exterior-wise.  The only thing we built set-wise was the cellar, because that house didn’t have a cellar that worked for Brendan (Muldowney, writer/director).  Thankfully (laughs).  Can you imagine how scary that would be?

The great thing about having a location like that where you can shoot interior and exterior meant that the house becomes a character, like you said, and, just like working with another actor, it’s amazing how a set like that can be used to your advantage and to bounce things off of.  It can really set the tone.  Even in the atmospheric scenes where there’s not a lot being said, my character, Keira, when she’s investigating and following the sounds and nuances of this ancient evil, the house is really so beautiful that it really embodies the idea of what Brendan wanted for the film.

Horror productions tend to be the ones where there’s always something dark attached to the filming itself.  Were there any strange occurrences on set?

Everyone had their own experiences.  I found it very comfortable to be with the house, but, funny enough, before we started shooting we were staying in cottages on the property of where the house was, Brendan’s cottage, mine, and Eoin Macken’s, who plays my husband, we all had an infestation of dead flies in them.  We went to work asking “Did you have flies in your cottage?”, and we were just kind of baffled as to why we had this fly plague in the middle of winter in Ireland.  I try to not think about it because it gave me the creeps (laughs). 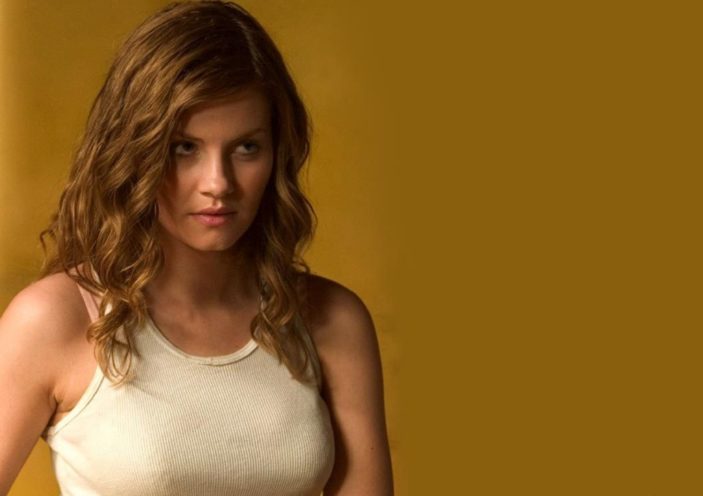 I feel like you have a great relationship with horror films, and I wouldn’t be able to pass on talking about House of Wax.  I love that movie so much, and I know you filmed that here in Australia.  Do you have great memories of filming here?

Australia was always such a bucket list (country) for me as a kid.  For me it really was on the other side of the world, so that in itself to be able to fly to Australia and live there for 3-4 months was outstanding!  The movie was on such a grand scale, it was such a huge film.  The sets we built out in Brisbane were crazy.  It was outstanding.  I look back on it and it was one of the biggest films I’ve ever been a part of, and with Joel Silver (producer), it was epic.  We were rock stars, and Australia was a very cool time.  We got to travel around to Melbourne, and living on the Gold Coast was really incredible.

It’s so great to hear you talk about Brisbane.  That’s where I am and I feel like it’s never spoken of as prominently as other cities in Australia.

Oh, that’s amazing.  I don’t have anything against Melbourne, I love Melbourne, but as a Canadian, Melbourne feels so much like Toronto, so I tell my Canadian friends that if they’re going to go to Australia, go to Brisbane.  I felt Brisbane was really cool and different.  Obviously there’s so many great touristy things to do on the Gold Coast and in Sydney, but Brisbane was my favourite.

On the mention of House of Wax, it seems like that, as well as other projects of yours, The Girl Next Door and the series Happy Endings, have found a reappreciation all these years later.  Is it a resurgence that you’re aware of?

Yeah, I’m starting to notice a few of the things I’ve done… as you said The Girl Next Door and Happy Endings, as well films like The Quiet, so many projects I’ve been a part of having these moments of resurgence of a new generation discovering them.  It’s great.  Maybe it means the work is a little more timeless as opposed to being “in the moment pop culture”.  Maybe the work is becoming something that can always be revisited.  I think it’s a great thing because it keeps the work alive.

It’s funny though because I’ll have people ask “Will you do it again?” with Happy Endings, but it was a moment in time and I think those three seasons we did were done to the best of our ability.  I love that it’s having a new life on streaming services.  It’s cool to have enough work out there that people can enjoy still.

The Cellar is now streaming on Shudder.