Film Review: The Cellar is a haunted house effort that aims for tension over bloodshed 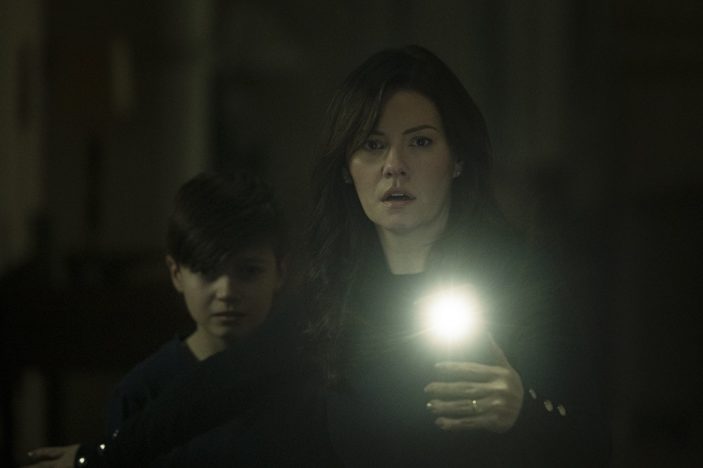 Whilst The Cellar won’t exactly be riding high on viewers’ lists of must-see scary movies, Brendan Muldowney‘s haunted house horror effort at least conjures an atmosphere and an unlikely climax to earn it valid points for trying.

Muldowney’s script initially plays into the genre tropes we expect when Keira Woods (Elisha Cuthbert) and her family – husband Brian (Eoin Macken), daughter Ellie (Abby Fitz), and son Steven (Dylan Fitzmaurice-Brady) – move into a stately property that’s as vast as you’d expect.  We should all know by now that large homes bought at an all-too affordable price means some scary shit has gone down – and will again – but there’s no horror movie in characters making sensible decisions, so Keira and Brian’s selection to leave their kids alone one night leans suitably into genre tropes 101; and we honestly wouldn’t want it any other way.

As Keira and Brian work on a new campaign at their jointly-owned advertising company, Ellie and Steven contend with too much open space and not enough power at home, leaving Ellie to tend to the estate’s fuse box which, wouldn’t you know it, is located in the cellar.  Ringing mother dearest to keep her calm as she counts each step down to the basement floor, Muldowney’s plotting decides to throw a legitimately unnerving spanner in the works as Ellie makes it to the tenth, and supposedly last, step.  Keira, having counted with her, takes a deep breath in an act of assurance with her frightened daughter who, unexpectedly, stays on the phone line and continues to count.  It may not sound like much to be afraid of, but it’s quite an effectively creepy sequence as we see Keira’s terrified and confused face listen to her daughter’s voice counting in a manner that sounds more possessed than organic.

From hereon the majority of The Cellar plays as you’d expect, with no one believing there’s something supernatural tied to Ellie’s now-disappearance other than an increasingly investigative Keira.  The resourceful mother does her own digging about the history of the house, and soon all of the property’s darkness comes to light; art director John Hand and set director Dara Hand deserving a noted credit for the design elements of the house and the “beyond” space that properly evoke a sense of dread.  Speaking of the aforementioned “beyond”, it’s the film’s ultimate reveal that truly allows The Cellar to stand apart from many of its haunted house contemporaries.  Whether or not it’s a climax that will work for audiences is another story entirely, but there’s no denying that many will be unprepared for the other wordly mentality it adopts, as well as the bold commitment to a temperament that doesn’t necessarily adhere to the happy ending model.

With no gore or blood to speak of, squeamish viewers can rest easy with their visit to The Cellar, though the film’s lack of such additives may drive other horror fans off who so readily associate graphic carnage with the idea of a scary movie.  But the gradual suspense and tension built throughout, as well as the injection of such thematics as the notion of an afterlife and the worshipping of the devil, mean there’s something gloriously old-fashioned about Muldowney’s movie.  Anchored by a committed Cuthbert, who manages to ground her performance with an understated believability, despite the craziness that surrounds her, The Cellar may be light on its horror ingredients, but its mystery-heavy mindset keeps it suitably watchable.

The Cellar is now available to stream on Shudder.