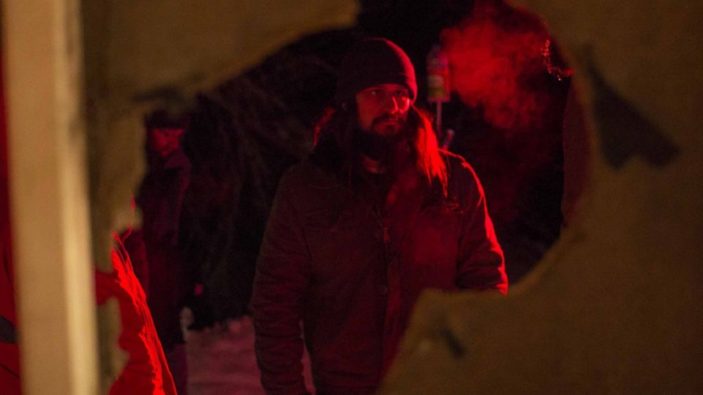 It’s the most wonderful time of the year, and fiery record store owner Tori Tooms just wants to get drunk and party, until the robotic Santa Claus at a nearby toy store goes haywire and makes her night more than a little complicated. Santa Claus begins a rampant killing spree through the neon drenched snowscape against a backdrop of drugs, sex, metal and violence, ultimately forcing Tori into a blood splattered battle for survival against the ruthless heavy metal Saint Nick himself.

And such is the premise for Christmas Bloody Christmas, Joe Begos‘s ode to seasonal horror.  As the film prepares to slay audiences at exclusive screenings for Monster Fest, before streaming on Shudder, Peter Gray spoke with Joe about the gateway horror that introduced him to the genre, shooting the carnage on film, and his stance on controversial genre opinions.

I’m a massive horror fan, and I love a good seasonal horror film too.  I wanted to ask you first what was the gateway film for you that introduced you to the genre?

I started watching stuff so early.  It’s kind of a blur of a handful of movies because I watched them from when I was like 3 or 4-years old.  I had super young parents and they had a huge VHS collection.  I feel like A Nightmare on Elm Street was always in the realm for me.  Basket Case.  The original Pet Sematary.  Christine, Halloween, Phantasm II, not one!  They were the ones I remember.  There’s not a time in my life that I don’t remember seeing them for the first time.  I just remember having always seen that handful of movies and always re-watching them.  I mean, The Terminator is an influence on (Christmas Bloody Christmas) and technically that’s the ultimate slasher movie.

Black Christmas is pretty much the go-to for people when they think of Christmas horror.  I liked in this film you reference the original, as well as the remake, and that spurs on the character of Riley and her tangent on Blumhouse and which sequels are better.  Her thoughts on Pet Sematary 2 and Book of Shadows: Blair Witch 2, are they extensions of your own? Or are they from conversations you have had?

Most of her opinions are extensions of mine.  The ones that you just listed then are mine.  I do not think that Alien: Covenant is the best (sequel), but most of the opinions (that character) has are mine, and I love that now, after spending 15 years of my life feverishly trying to explain to people how fucking good Pet Sematary 2 was…people all over the world are going to be forced to listen to how good it is (laughs).  She sits there for two minutes selling it like it’s a fucking Siskel and Ebert episode!

On the mention of Tori, she’s an absolute firecracker of a character.  So much of Riley Dandy’s delivery feels incredibly natural and loose.  Did you give her specific dialogue? Or did she have some freedom to go off the cuff?

It’s a mix.  I very much love to riff and improv, and that’s one of the main reasons she got cast.  She was Riley.  She was really good in her audition.  When I narrowed it down I would have people riff, but she would riff in a way that sounded like my writing.  She didn’t even know me, which is why I ended up casting her.  There are some things you had to stick to directly, like the Pet Sematary bit, there was no deviating from that, but there were other beat point that as long as she hit them, she could fill in the blanks.

You shot this on film, too.  Was there any specific reason behind that?

This is my sixth movie and my third shooting on film.  I just love film.  I love the aesthetic of it.  I love the way it makes things look.  That sci-fi grain (and) it just handles light better.  Subconsciously, when you’re watching it’s making you watch it in a different way, even if somebody says they don’t know the difference.  It makes effects look better (too).  And everyone is working on their toes because they know they can’t fuck up.  They have to be at their best because there’s no playback.  They don’t want to blow the take.  Money is burning once you start rolling.  It’s just love, you know.  Film is cinema to me.  It’s the same reason I love practical effects.  It’s the way things should be done. 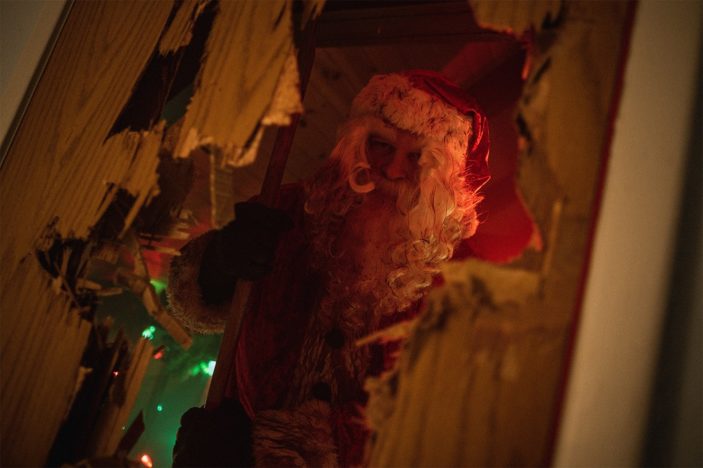 On the mention of practical effects.  The staircase sequence involving that head smashing moment may possibly be my favourite of the film.  Do you have an arsenal of ideas of how to off people when putting this sort of film together?

Sometimes I’ll just use placeholders and other times I’ll have really cool ideas.  It was actually really hard (with this film) because I didn’t want to make Santa a Jason Vorhees, where he’s just finding new weapons.  He’s a robot (too), so how many different, creative ways can I come up with the use of an axe? And because he’s in a toy store we knew there wasn’t going to be a chainsaw (for us) – as much as I wish that he had other weapons – it was, like, an axe makes sense because it would be an emergency thing.  It was doubly hard to make things exciting whilst using that same weapon.  What I was wanting to do with that head crush was a play on that staircase killing in High Tension.  I’m a big fan of that film.

With Santa, I really appreciated that you used the most minimal exposition when it came to the robots being defective.  Did you ever toy with delving deeper into any background?

I wanted the least amount of background possible.  The (faux) commercials at the beginning of the movie were shot a week before we had to deliver the final movie.  I was screening it for people and a lot of them were saying they wish they had a little more semblance of where Santa came from.  I tried to think of the easiest way where at the beginning we have that and some throwaway dialogue, and, it’s like, now I can just go into the movie.  So I thought “What if there’s a commercial to begin?”, and we did this Robocop-type thing and all those commercials where shot in my apartment and at my neighbour’s house.

We started the movie like that and I think it’s the perfect moment.  I didn’t want to pull away from it (either), because the main characters have no hand in the robot coming to life.  It just happens, and they’re in the wrong place, so they would never know any exposition.  They don’t fucking care.  They don’t know and the cops don’t know.  I didn’t want to force exposition, if you know what I mean.  It’s just not that type of movie.  It’s like the original Halloween, if you remove the sequels, it’s just a lunatic…that’s all we need it to be.  I don’t care that it’s a robot.  There’s no deeper meaning.  If you want a deeper meaning go watch a Michael Crichton robot movie (laughs).

In addition to the opinions on film, there’s the conversation regarding musicians and those that cut their hair then produce the worst albums of their careers.  Was that similarly your own thoughts?

I think all the bands that cut their hair, their albums do suck when that happens.  Except for Soundgarden.  I think “Superunknown” is a really good album.  And I think “Down on the Upside” is a really good album (too).  But I needed to give (Tori) that opinion for the sake of argument, and I really couldn’t think of any other bands that I really liked where that had happened.

Is there ever the worry one of these filmmakers or musicians will hear these thoughts?  Or you’re just off the mindset that it’s your opinion and who cares!

Yeah, I don’t give a fuck.  I hope that (director) Mary Lambert hears the rant on Pet Sematary.  I hope (Blair Witch 2 director) Joe Berlinger knows his horror movie initiates a sex scene because of (Tori’s) love of Book of Shadows too.  Metallica? I’m sure if they heard my opinion they wouldn’t care.  They probably wouldn’t like me anyways, so much as I pay $900 or whatever a fucking ticket to see them live.

Christmas Bloody Christmas is screening as part of this year’s Monster Fest, running from 8th – 11th December 2022 across Sydney, Adelaide, Perth and Brisbane, before streaming on Shudder from December 9th.