Interview: Brianne Tju on making Gone in the Night, the comfort of the horror genre, and the “beautiful experience” of working with Winona Ryder 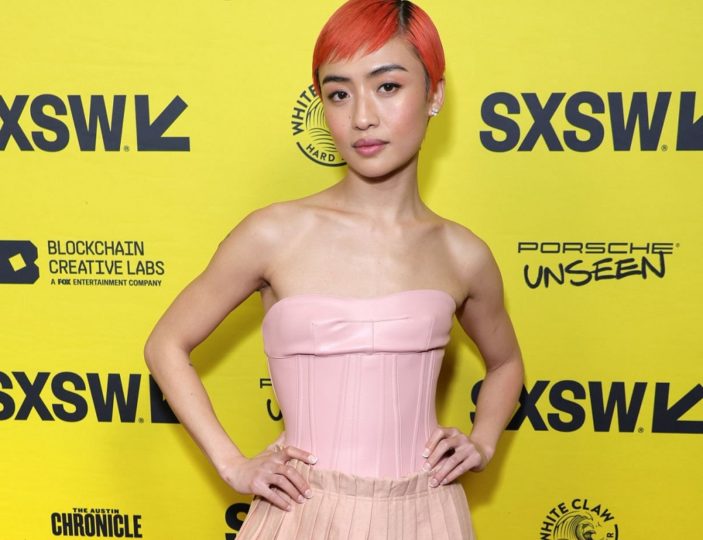 Quickly earning the title of “new generation scream queen” is something that Brianne Tju seems to be wholeheartedly embracing, and her continued foray into the darker subsects of the genre are only further cementing her status.

Having slashed and screamed her way through the streaming series’ of both Scream and I Know What You Did Last Summer, Tju is now at the centre of another horrific mystery in Gone in the Night, a twisted thriller from the mind of Homecoming creator Eli Horowitz.

The film tells of Kath (Winona Ryder) and her boyfriend (John Gallagher Jr.) and their finding of a mysterious young couple (Tju and Owen Teague) at their weekend getaway rental; the abode apparently double-booked. With nowhere else to go, they decide to share the cabin with these strangers, but when her boyfriend mysteriously disappears with the young woman, Kath becomes obsessed and enlists an unlikely supporter (Dermot Mulroney) with finding an explanation for their sudden breakup, but the truth is far stranger than she could have ever imagined.

As the film arrives on digital and demand, Peter Gray spoke with Brianne about her thoughts when first reading the bizarre script, her love of the horror genre, and how it was working with such an icon as Winona Ryder.

You’re having a great “scream queen” moment as of late, with both the televisual series of Scream and I Know What You Did Last Summer – two of my favourite films – so I’m all for it.  I love the genre.  Is it one you have an affection for too?

I do. I love horror films. I also love the way horror and thrill, and even gore and special effects, how they can lend to telling the story and emphasising it in a way that can heighten the fear and almost make it a metaphor.  But I think it’s very effective in storytelling.  And I think it’s fun. The world just needs to have fun.  People want to watch things that are fun, and they don’t have to necessarily be “Oscar worthy” or whatever.  But if you’re having fun if you’re creatively fulfilled, and people enjoy watching it, isn’t that like what all this is for?

It’s funny how we turn to horror to have fun or to escape, even though what we’re watching…

Yeah, what does that say about (us)? Like, well, “I can’t wait to get murdered”. Like it’s sick, it’s totally sick.  But as an actor, I love doing it.  Because it’s beyond the realm of reality.  And so you get to stretch your imagination and you get have the challenge of making those wild experiences or circumstances feel real for the viewer.  I think that makes it more scary, is when you can actually imagine being in that scenario.

I saw Gone in the Night at SXSW earlier this year when it was titled The Cow.  When you get that script with that title, are you thinking “What the hell am I about to read?”

Absolutely. I was like, “What the heck is this?” I got an email from my agents, and I just see that it’s Eli Horowitz. I immediately I know who he is! I listened to the Homecoming podcast, and I had watched the show, and I loved it.  When I see that it’s called The Cow I’m wondering what it is about, but it doesn’t matter because it’s from Eli so I’m going to read it.  I read it twice in a row the same night.  It was just one of those things where it flew by.  I felt like I read it in a matter of minutes each time because it was so enthralling and so interesting.  It kept me on the edge of my seat and I just had to finish it.  And I think that twist ending doesn’t disappoint!

As you said that ending is so unexpected, and I think now that the film has been retitled to Gone in the Night it may throw people off even more because it alludes to certain situations…

Exactly.  It’s kind of like we’re just throwing in another distraction from the truth.  Even The Cow, that name was so vague and you don’t really understand until the very end.  I think it’s just the way Eli’s brain works.  If you watch Homecoming, the way he approaches storytelling is very nonlinear, and he’s very detailed oriented.  I really admire his ability to trust that if you’re subtle in your storytelling it will really pay off for the people paying attention.

With your character I really appreciated that we don’t get a lot of backstory with her when we’re first introduced to her.  We just have our first impression of her.  Did you come up with a more detailed story for her to get into the mind frame.  We’re immediately on edge with your character when we meet her.  I hope you take that as a compliment…

It’s a huge compliment.  Talking to Eli in the beginning, we were really trying to form Greta in a way that almost made her feel like an alien on Earth.  To have that intimidation.  What’s so interesting is that when you first meet Greta that isn’t the actually the beginning of her as a character.  She’s had relationships with other people.  What really helped me is that when we were shooting I had two scripts.  I had the one the way it was written in its order, and then I put the story in chronological order in a separate script so that no matter where I was going I was going to be able to keep track on her.

It’s funny you saying about being like aliens, because I remember watching it thinking that something is clearly going on with your character that we just aren’t seeing.  Rewatching the film really proves beneficial as we can see all the detail that when into your character work and interactions with those around you.

I think that’s what makes it fun for people when they watch it again.  Because even before the twist ending there’s so many little Easter eggs throughout.  I think it just enriches your understanding and experience in watching it a second time over.

And in those people around you there’s Winona Ryder.  How was it working with her?

It’s insane because I grew up watching her.  I’ve always adored her.  She’s iconic.  She’s so, so talented.  I was very intimated at the idea of working with her.  Knowing I had scenes that were just one on one between her and I, I remember thinking I didn’t know how I was going to survive.  I remember talking to Eli and asking him to hold my hand throughout this process.  I got so lucky that Winona was so supportive and so kind.  She’s just such a giving person and actor, and I learned so much from her.  I had the best experience with everyone on that deck.  Truly.  I was so intimidated by everyone on that set and they all treated me as an equal collaborator.  It was such a beautiful experience, and it’s something I hope to find again and again.

Given that this film is one that deals with the bad side of an Airbnb experience, and you hear such horror stories of people finding dead bodies in these homestays, have you ever had an experience that’s a little untoward?

I have never had a bad one.  So, that’s been good (laughs).  It’s funny because Eli kind of came up with this story as (initially) a homestay gone wrong.  He rents out a cabin that he owns as an Airbnb, and I asked him if he has any crazy stories.  Luckily, no bad ones yet, but, you know, there’s still plenty of time.

Well, you might be able to make a great movie out of it.

Gone in the Night is available On Digital and On Demand in the United States from August 2nd, 2022.  An Australian release is yet to be determined.