The Cow; A slow burn thriller with a wild reveal that asks more questions than it answers: SXSW Film Festival Review 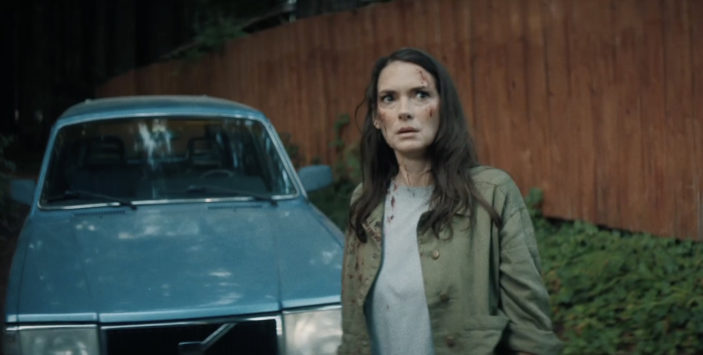 For such a scrappy little feature, Eli Horowitz‘s The Cow has some impressive calibre that will no doubt help earn it some extra eyes beyond the unique indie crowd this seems tailor made for.

Headlined by Winona Ryder (always a treat to see taking charge these days) and a suitably disarming Dermot Mulroney, The Cow sets itself up as a mystery thriller before throwing caution to the wind and incorporating a rather wild reveal that gives the film a talking point, but feels more designed as shock rather than an organic structure.

The initial set-up focuses on Ryder’s Kath, a mid-40’s divorcee hoping for some quality time away with her decade-younger beau, Max (John Gallagher Jr.), at a remote cabin in the woods.  The age-gap seems to be proving more and more a point of contention between the pair – one awkward moment sees him relay to strangers how much more tired she is than him so early at night – and this seemingly spontaneous getaway has an air of make-or-break for the couple.

The trip starts off immediately on the wrong note when Kath and Max arrive at the airbnb to note its been double-booked, and the couple already enjoying the space – Al (Owen Teague) and Greta (Brianne Tju) – are hardly the hospitable type and show little care for Kath and Max’s plight.  Eventually they agree to share the space for the night, but in the morning Kath and Al awake to the devastation that is Max and Greta’s disappearance; the two have run off together after being caught by Al in the midst of an affair.

As upset as she is, Kath seems more determined to learn just why this has happened, and with Al no real help in uncovering Greta’s whereabouts she contacts Barlow (a grizzled Mulroney), the host of the cabin.  Something of a recluse but no less charming, Barlow reluctantly agrees to help Kath, with their search for the couple leading to a seedy underworld that asks more questions that it can answer and ultimately drives Kath back to the cabin, where certain little pieces start to form a bigger picture she’s unsure she wants uncovered.

As the film relays the why behind Max and Greta’s disappearance, Horowitz and co-writer Matthew Derby craft a mystery that admittedly is unlikely to be solved by even the most clued-in of audiences.  But as wild and as unpredictable as its eventual explanation is, we are never given enough time to digest what is happening.  The Cow never overstays its welcome with a neat 90 minute running time, but in being so compact it does itself a disservice by slow burning so much of its plot, teasing us with a mystery, pulling the rug from underneath us with a more fantastical culmination, before leaving us on the floor with a sore head from such a savage sweep.

Whilst it’s great to see Ryder in a lead role again, in a film that at least can never claim to be boring or foreseeable, The Cow just needs a little polish to smooth out its ambitious but rough edges.  I can’t deny I was always engaged with what was taking place, but its quick reveal and eventual descent into unbridled territory left me wanting something more full-bodied.

The Cow is screening as part of this year’s SXSW Film Festival, which is being presented in-person and virtually between March 11th and 20th, 2022.  For more information head to the official SXSW website.