As Baz Luhrmann stated prior to the release of the trailer for his anticipated biopic Elvis, that they are “the invitation to the movie”, Peter Gray was fittingly invited to attend a global press conference with Baz and lead actor Austin Butler to discuss their 3-years-in-the-making musical epic.

Touching on the decision to make a film about someone as iconic as Elvis Presley, his relationship with black culture, and the unique casting of both Butler and Academy Award winner Tom Hanks, Baz “lived” the experience of what it was to be a genius outsider, which is clearly reflected in the film’s bold, exciting trailer.

Why did you decide to make a movie about Elvis Presley?  Icon.  Superstar.  American tragedy.

Baz Luhrmann:  It’s interesting about my background in storytelling.  Without invoking some of the greats, like Shakespeare, great storytellers never really did the biography.  They took a life and they used to to explore a canvas of an idea.  A great biopic is terrific, but something like Amadeus, for example, that’s not really about Mozart.  That’s about jealousy.

There are musical icons in my life that are so important to me.  I was always a fan of Elvis, but I don’t know if that fanhood in any way was the reason why, all these years later, I wanted to do (this film).  Truth is, in this modern era, the life of Elvis Presley could not be a better canvas on which to explore America in the 50’s, the 60’s and the 70’s.  It’s a mythical life that he lived.  That’s what drew me in.  That and a character named Colonel Tom Parker.

You have Tom Hanks basically playing a villain.  I think a lot of people aren’t going to be expecting that, seeing him play someone we could perceive as unsympathetic.

Baz Luhrmann:  I think Tom really ran towards that.  It’s interesting because “villain” is too easy a way to wrap it up.  I don’t think I’m giving anything away by saying the way that he opens up the trailer – “There are some that would say I’m the villain of this story” – he goes on to tell that story.  He doesn’t say “…and they’re right.”

From that character’s point of view he’s defending his telling of that story.  It’s a device, and it’s a device that works because in truth, when it comes to a historical character there’s only ever one person’s telling of that story.  Even in life.  If you lived with an Elvis or lived with an Amadeus, it’s your memory, your version of their life, and people always tell the story from their (own) perspective.

Austin, what drew you to playing Elvis Presley?

Austin Butler:  There’s many reasons, but I think, fundamentally, getting to explore the humanity of someone who has become the wallpaper of society in a way.  He’s such an icon.  He’s held up to super-human status.  To get to explore that and learn the way he was, and find the human within that icon, that was really such a joy that I could do for the rest of my life.

That paired with getting to work with one of the greatest filmmakers to ever live is just a joy of my lifetime.

How long was this process for you? Living inside Elvis Presley…

Baz Luhrmann:  It’s only three years!  I knock these pictures out real quick, what are you complaining about? 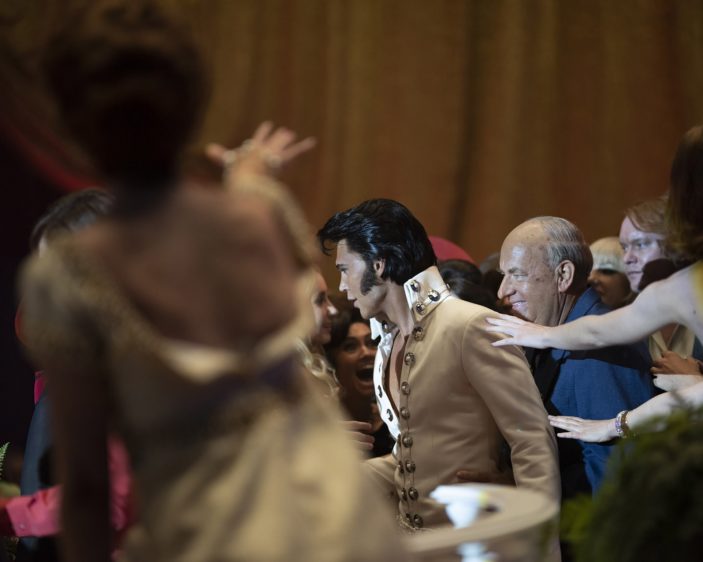 One thing that struck me was that you are really singing these songs.  It’s not just Elvis’ voice, it’s your voice.  How was that process for you?

Austin Butler:  Huge shoes to fill.  I think when I began the process of this I set out to make my voice identical to his.  That was my goal, that if you heard a recording of him and heard a recording of me, you wouldn’t be able to tell the difference.  I held that for a long time.  What that does is also instils this fear that I won’t be able to achieve that, so that burned the fire inside me to work and work.  I think maybe a year before we started shooting it was six-to-seven days a week of voice coaching and working with the right experts and getting my register in the right place.

Ultimately the life is what was most important.  You can emulate somebody, but to find the humanity within, the passion… ultimately I had to release myself from the restraints of that and try to live the life as truthfully as possible.

It seems like he’s such a tortured guy, despite all of this success.  There seems to be a spiritual yearning, which would explain his attraction to gospel music.  What were the challenges in interpreting that part of him?

Austin Butler:  You know, I think it was an incredible gift us getting to go down to Nashville and record with some of the most amazing gospel singers I’ve ever heard.  I remember walking in to this little chapel, with all these period microphones, and they’re stamping their feet.  I stood in the centre and tears poured down my face and chills down my spine.  It’s a glorious experience and it’s hard to not have it in your marrow.  It was experiences like that that really showed me how much gospel influenced Elvis on a musical level, on a spiritual level, on the way he moved, and the freedom of his body.

One of the big questions around Elvis is his relationship to black culture and black America.  In the trailer there’s images of him in a black church and other environments.  How did you want to deal with that in the film?

Baz Luhrmann:  You know, I am the ultimate outsider.  I come from a very small country town, not dissimilar to Tupelo (Mississippi).  Where I was from we’d call something like Tupelo “the big smoke”, because my town was so small, like 5 houses.  But as an outsider when I do something like Moulin Rouge in Paris, I come in as an outsider and I live it.  If I do The Get Down, I come in as an outsider and I live it.  Doing Gatsby I lived like Fitzgerald, probably a little bit too much, but I do live it, it’s a real truth.  That’s why I make films so infrequently.  The greatest joy is to be an outsider and live it.  The thing that became so apparent to me in living this story was the number one thing about Elvis Presley’s journey isn’t that black music isn’t a side note or a foot note or a bit.  It’s absolutely the canvas on which the story is writ

Elvis is scheduled for a release in Australian cinemas from June 23rd, 2022.