Interview: Andi Matichak on Halloween Ends: “This is the final conclusion. Let’s not be precious about it.” 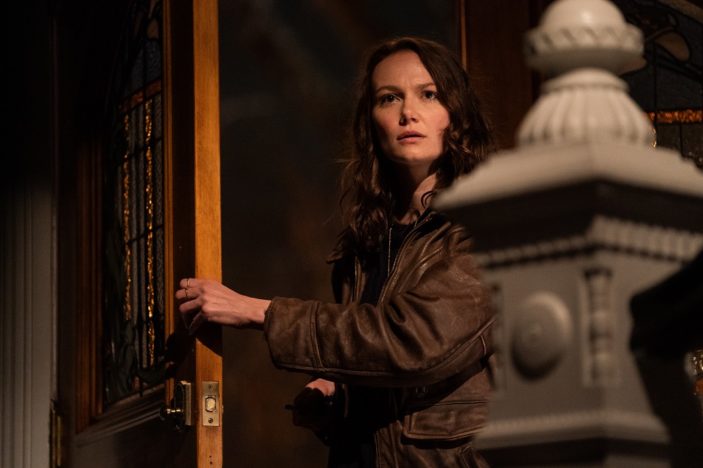 After skewering the narrative of the Halloween films with the direct name-same sequel in 2018, David Gordon Green took a massive kitchen knife to all that had come before and created a brand new series within the horror franchise.

After reviving the iconic Michael Myers for Halloween and Halloween Kills, the epic conclusion to his four decade-long battle with Jamie Lee Curtis’s classic final girl Laurie Strode is now upon us in Halloween Ends.

Set four years after the horrific events of Kills, Ends sees the town of Haddonfield living in supposed tranquillity as “The Shape” hasn’t been seen since.  Laurie is writing her memoir and living peacefully with her granddaughter, Allyson (Andi Matichak), only to find her bliss temporary as the killing of a young boy reignites town fury and panic.  Now, Laurie must finally confront the evil she can’t control, once and for all.

Ahead of the film’s release, Peter Gray spoke with Andi about her thoughts on the series ending, how it was to work with Jamie Lee Curtis, and her words of wisdom to Halloween fans before seeing the film.

Lovely to talk to you.  I’m a horror fan.  I’m a Halloween fan.  I have loved (your character) Allyson’s trajectory over these films.  Before getting to Halloween Ends though, you hear that actors starring in horror films aren’t particularly big fans.  I know Jamie Lee Curtis isn’t a fan, so are you of horror films themselves?

Being exposed to the horror community and the culture around horror films, starting in 2018, has made me more of a fan.  But before then I was way too terrified to watch any horror movie.  I couldn’t get through it, they were too scary.  But now I’m much better and I enjoy it, and I also love the community and (that) culture is what keeps me coming back.  There are so many subgenres.  There’s always something for everybody in the horror space.

Not to give anything away, but (Halloween Ends) isn’t a traditional Laurie vs. Michael Myers movie.  I was certainly not expecting this to go where it went.  What was your reaction when you read the script and realised “Oh, this is how Halloween ends.”

Well, it is the epic final conclusion between Laurie and Michael at the core of it.  And what drives the film, in my opinion, is Jamie’s performance and that slow build-up into the finale which is so satisfying and so fun.  It’s a huge swing of a movie.  It’s very David Gordon Green.  It’s a blast.  It might be my favourite of the three.  It’s just so fun and unexpected.

I had been briefed a little bit on the direction they were going when we were filming Halloween Kills, and then when I read the script it wasn’t that I was totally gobsmacked by what was going on, but I was gobsmacked once I read it.  I was like “Oh my God! How? This is insane!” and the execution of it is really well done.  I saw it yesterday for the first time and it’s a blast.  It’s a blast.

As I said I really have loved what Allyson’s trajectory has been over the series.  She’s never been a victim in the traditional sense.  She’s suffered loss but there’s always been that strength and rejection of being a victim.  And as you said you received this film’s script during Halloween Kills, but did you know when filming Halloween (2018) of where your character was going? That there were further stories?

No.  No, I didn’t.  It was something…there may have been rumblings about doing more, but nothing was concrete at all.  Even when the film came out it was kind of radio silent for a while before we got word we were doing another.  And not only doing another, but doing two more.  So, it was definitely not something I expected.  I’m grateful that it turned into what it turned into, because it’s been such a highlight in my professional life and personal life. 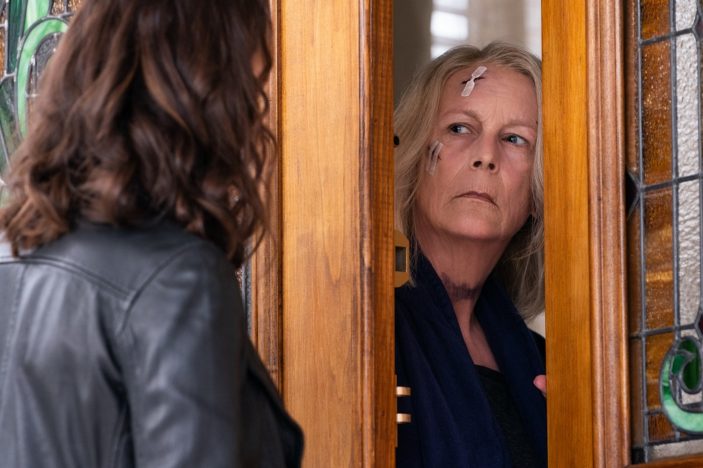 I had the pleasure of talking to Jamie Lee Curtis in person when she came to Australia for Halloween in 2018.  And then she “interrupted” my interview with David Gordon Green last year, and she apologised, and I just thought “You’re Jamie Lee Curtis, you can do whatever you want!”  She’s just such a force of a person.  How has it been to work with her over these three films? And has she imparted any advice for you going forward with your career?

Jamie leads by example.  She is a heck of an example across the board.  It’s incredible watching her step on a set and give so much of herself.  And genuinely so.  Not just, you know, pretending to be there with you but looking over your shoulder because there’s a million things going on.  She speaks to you, she’s here.  And that’s all that matters is that moment right here.  She never takes anything for granted, and it’s been really an incredible journey to learn and work with her.

Do you think she’s spoiled you going forward?  Now you expect every set to be like that?

(Laughs) Yeah. I joke that there’s never going to be another set like the set I got to create off these last three films.  David Gordon Green is a special human being and a special filmmaker, and he puts together a very specific group of people to make these movies.  We’re never gonna get that again.  It was something where, especially going into this last one, there were many days where everyone was looking around making sure no one was taking it for granted, because we were trying to soak in the magic one last time.

You said you love being a part of the horror community, and horror fans can be passionate, vocal people when they need to be.  Do you have any words of wisdom for them going into this for what they can expect?

Go in open-minded and ready to have fun.  I mean, this is the final conclusion.  Let’s not be precious about it and just have a great time.  And I think that they will.

That should be on the poster.  “Halloween Ends.  Let’s not be precious about it!”