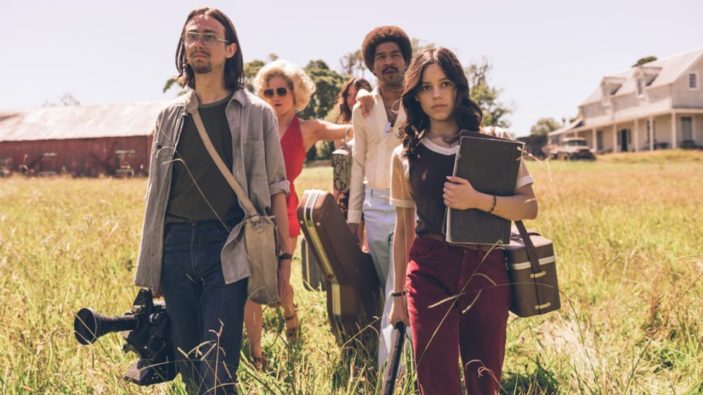 Taking it back to the basics of the horror genre – i.e. sex and blood sprawled out on a big cinema screen – Ti West‘s return to the fray (his last horror effort being the 2013 found footage outing The Sacrament) indulges in the slasher mentality of eras gone by whilst fusing it with a modern, intelligent sensibility.

Appropriately titled X, West’s film initially sets itself up as a Boogie Nights-esque road trip movie where a rag-tag group of pornography performers and filmmakers make their way to the deep heart of Texas (a location that’s always had a special place for the horror genre) to film “The Farmer’s Daughter”, an adult production that ambitious director RJ (Owen Campbell) is hoping to frame as a genuinely “good dirty movie.”

Less concerned with any artistic vision and primarily focused on the penetrative material is sleazy producer Wayne (Martin Henderson, managing to inject a heft of likeability into his could-be off-putting character), who has been inspired by the success of “Debbie Does Dallas” and recruited star-in-the-making girlfriend Maxine (Mia Goth, an absolute treat), the particularly well endowed Jackson Hole (Scott Mescudi, aka Kid Cudi), a Vietnam vet who more than loves his new career, and Bobby-Lynne (Brittany Snow), a blonde bombshell type who simply wants to make enough for herself to buy a house with a pool so that she can sunbathe her goodies, to bring his sexual vision to fruition.

Whilst Maxine, Jackson and Bobby-Lynne all make it very clear that they enjoy the pornographic aspects of their careers – something that doesn’t entirely sit well with RJ’s “church mouse” girlfriend, Lorraine (Jenna Ortega, filling out her scream queen quota nicely following earlier 2022 outings Scream and Studio 666) – they’re also quite the jovial bunch, enjoying a drink and a sing-along between their takes; Snow gets a chance to dust off her Pitch Perfect pipes with a sweet acapella rendition of Fleetwood Mac’s “Landslide”.  It’s a smart way to ease us into the eventual carnage West will adhere to, humanising the archetypal personalities that so often the genre shows little care for.

It would all be well and good if X was merely a sex feature – it would certainly be preferable for the characters – as their sinful activities don’t sit too kindly with the elderly couple that Wayne has rented the farmhouse from.  Howard (Stephen Ure) and his wife Peal (Goth, pulling double duty, unrecognisable under her aged prosthetics) are, respectively, disgusted and aroused by the actions of Wayne and co., with Pearl in particular taking a liking to Maxine; Goth playing opposite herself furthering the quiet actress’s impressive demeanour.

More in line with the original Texas Chainsaw Massacre than its awful Netflix sequel is, X, on its surface, is a perfectly in tune horror feature that revels in its sexuality and its situational slaughtering; stabbings, impalings, gun shots, and a nasty run-in with an alligator all playing a part in the ensemble’s offing.  But just as much as West is honouring the 1970’s aesthetic with his visual style, his use of split-screen, screen wipes, and juxtaposing edits serve a reminder that this isn’t simply aping a directing style from films gone by.

With no interest in making any grand statements about pornography or ageing – the closest the film comes to any type of commentary is through television cutaways of a preacher and his word of the Lord – X is, quite simply, a nasty-minded slasher with a wicked sense of humour and a taste for blood.  Horror fans after consistent gore and thrills may find their patience tested with West’s penchant for the slow burn, and the artier crowds who have embraced the “elevated horror” the genre has so gleefully succumbed to of late could be turned off with X‘s more mainstream thinking, with this working as a film that rests comfortably in the middle; enjoying its time in teasing the kill, before running red with a narrative that’s as straightforward as the weapons piercing whichever body part Howard and Pearl see fit.