Film Review: Old is an embarrassing retreat in quality for M. Night Shyamalan 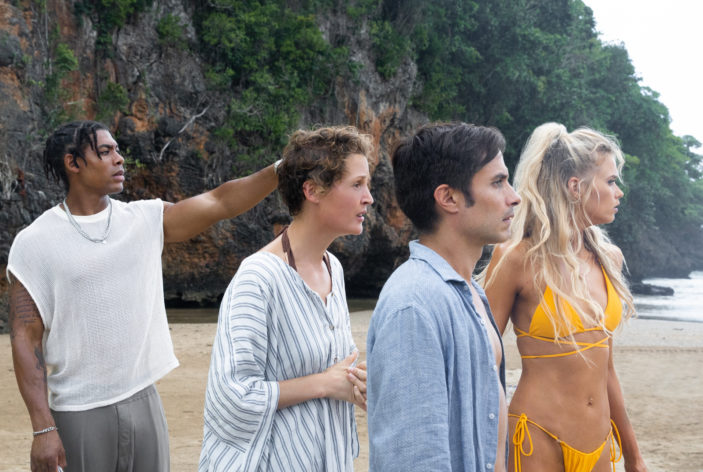 There’s really no other way to say it – M. Night Shyamalan‘s Old is bad.  It’s very bad.  In fact, in some instances it’s downright awful!  Mirroring the same career slump he experienced after the 1-3 punch of The Sixth Sense (1999), Unbreakable (2000) and Signs (2002) with such misfires as The Lady in the Water (2006), The Happening (2008), The Last Airbender (2010) and After Earth (2013), Old is coming off the back-end of such recent hits as The Visit (2015) and Split (2016) – seen as something of a career resurgence for the contentious director – once again bringing into question his strength as a filmmaker and storyteller.

An expansion on the graphic novel “Sandcastle”, penned by Pierre Oscar Lévy and Frederik Peeters, Old very much feels like it’s in Shyamalan’s wheelhouse as a twisted horror tale ripe for the uncovering.  Known for his narrative twists and “gotcha” moments, a story about a secluded beach that somehow houses a time zone oddity that rapidly ages those that vacation there feels perfectly on brand.  And had Shyamalan expressed more faith in his audience, Old could have very much been a chilling, supernatural-leaning thriller that actually followed through on its posing question of how would you spend the rest of your life knowing it’ll be over within a day.

What Old ultimately is, however, is a far sadder, more inexplicable reality.  From the opening seconds Shyamalan’s overt exposition is on display, with husband and wife Guy and Prisca Capa (Gael Garcia Bernal and Vicky Krieps) vacationing on what is to be their last family hurrah; we learn their children, 11-year-old daughter Maddox (Alexa Swinton) and 6-year-old son Trent (Nolan River), aren’t privy to the news that mum and dad are in the planning stages of divorce.  Prisca makes comments on how she can’t wait to hear Maddox’s singing voice when she’s older and that they need to enjoy being young – lines of dialogue that don’t sound remotely natural but are clearly there to drive home the eventual ageing hook of the story – as they travel to their supposed island retreat, ultimately in awe of the service they receive upon arrival.

Everything about the resort and the staff feels specifically catered to the Capa family’s tastes, and if the Stepford wife-like mentality of the area wasn’t enough of an off-putting notion, Shyamalan’s treatment for how Trent is written could very likely having you question if staying on board with the film is worth the trouble; hint, it’s not.  It isn’t long before the elusive beach is suggested as an exclusive activity for the resort guests – Rufus Sewell as an intense surgeon and Abbey Lee as his young trophy wife, and long-married couple Jarin (Ken Leung) and Patricia (Nikki Amuka-Bird) also on hand – and once they arrive, metaphorical shit not only hits the fan, but every wall in sight.

The idea that this mystery beach essentially acts as a prison for those visiting is one that is indeed intriguing, and when it’s deduced that every hour spent equates to two human years, the panic sets in as the children age rapidly in front of their parents’ eyes; Alex Wolff, Thomasin McKenzie and Eliza Scanlen portraying grown-up versions of children who are all pre-teens when they first visit.  An intriguing idea does not a good movie make however, with Shyamalan seemingly ill-equipped to let any intelligence sink through his pages as every character audibly describes what’s taking place in a manner that embarrasses the reliable talent he’s compiled on screen; Wolff, Sewell, Leung, and Krieps all deliver truly awful performances, seemingly trying their hardest to out-do each other on who can over-exert the most.

The fact that these parents soon realise they are likely to die after one day on this island, and that these young-minded children are growing into adults without the intelligence to match their age, is something that is a genuinely terrifying thought. Shyamalan even flirts with body horror in some instances – there’s one segment involving the breaking of someone’s limbs whose body becomes grotesquely contorted due to the beach’s ability to “heal” any open wounds – that suggests he could have truly leaned into the heightened horror, but frustratingly opted for an exaggerated temperament instead, resulting in Old being a far more humorous venture than I presume he intended; remember, The Happening wasn’t a comedy either, but that shit was hilarious!

As for that elusive Shyamalan twist too, well, there’s something here that “explains” the nonsense on screen.  It doesn’t strike nearly as hard as his greatest hits (“I see dead people”, anyone?) or even a middling chart success (remember The Village?), but he at least attempts something greater than it being toxins in the wind (insert Mark Wahlberg confused gif).  Perhaps, like the aforementioned Happening, Old should best be re-evaluated as a comedy – a midnight movie in waiting even – as the choices Shyamalan makes (including giving himself something of a plum role) all defy logic.  You won’t lose any actual years off your life with this, but even these 108 minutes feel too precious to spend on a film that, despite being about getting older, aeroplane-spoon feeds its audience as if we were still in the learning development stages of our existence.

Old is screening in Australian theatres (where accessible) from July 22nd, 2021.