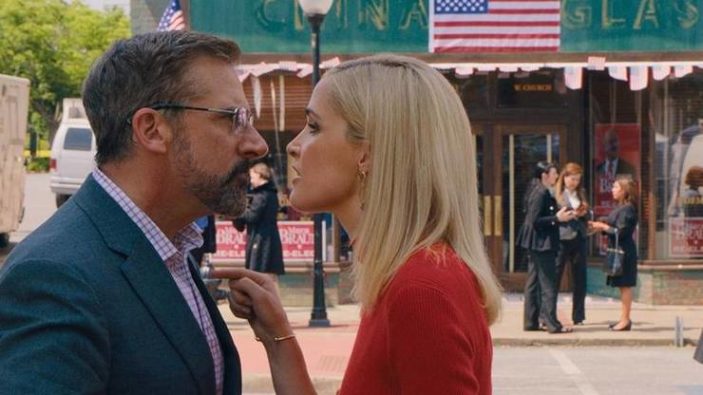 If there’s anyone who would be secure enough to make a film based around politics, Jon Stewart would arguably be one of the most well suited.  Whilst not quite as politically savvy as one might expect, given his penchant for satire, Irresistible is nonetheless a sly, consistently witty affair that wisely doesn’t exactly choose a political side to skewer; let’s call it a comedy for equal opportunists.

Loosely plotted around a 2017 Georgia-based congressional election that was widely blown out of proportion by the two main U.S. political parties, Stewart’s film moves to the sleepy town of Deerlaken, Wisconsin for a mayoral campaign between long-running Mayor Braun (Brent Sexton) and hopeful candidate Jack Hastings (Chris Cooper).

When Hastings, a retired Marine Colonel, is recorded making an impassioned speech at his local town hall, Democratic strategist Gary Zimmer (Steve Carell) comes across the video and near-instantly hauls to small town Deerlaken to propose that Hastings could be enough of a Republican-style Democrat to sway the more red-minded voters.

Jack’s reluctant to follow Gary’s advice – it’s safe to say that Jack doesn’t exactly play by the rules Gary is used to his figures adhering to – but does so for the good of his town, employing an assortment of quirky locals and his own daughter (Mackenzie Davis‘ Diana) to act as his campaign party; the typical romantic distraction Diana provides for Gary is wisely acknowledged as a gross narrative trope that, as he notes, only certain U.S. cities would begrudgingly embrace.

Gary and Jack’s partnership initially appears to act as a positive for the latter’s campaign hopes, but when Gary’s long-time political rival Faith Brewster (a fabulous, acid-tongued Rose Byrne) swoops in to shake up Braun’s political standing, Irresistible more than fires on all cylinders, with Stewart’s script allowing both gifted comedians to shine equally.  Though more on the Democratic side of politics, he makes sure to paint both Gary and Faith as unlikeable people;  Carell gets to spit such finely crafted lines as describing Jack as “Bill Clinton with impulse control”, whilst Byrne does so much with the smallest retort (“You look fat” she so casually states to him, before licking the remnants of his pastry off his face).

Rural middle America is the perfect landscape for such political ribbing, and whilst Stewart has fun with the light-mocking of the Midwest types – the lack of diversity, the overt politeness, the nationwide casual attire – he never leans fully into the nastiness of politics, and whether that’s to the film’s detriment or not is more a reflection on the individual viewer.  Ultimately there’s something surprisingly sweet about Irresistible, though it holds just enough of a bite to showcase that Stewart hasn’t lost his edge.

Irresistible is screening in most Australian cinemas from October 15th 2020.