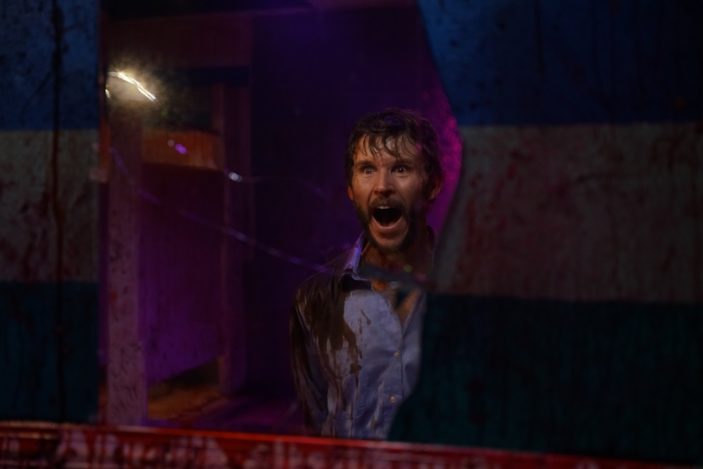 With a rest-stop bathroom glory hole serving as a type of universal gateway between a confused, confined Ryan Kwanten and an unseen, but very heard, J.K. Simmons, one would be forgiven for thinking Glorious may be, well, just a little filthy.

Sure, it’s dirty at times and leans into a gory mentality when it sees fit, but it’s far more reflective than it has any right to be and, most importantly, it’s a lot of fun.  At a brisk 80 minutes, director Rebekah McKendry knows she isn’t wasting anyone’s time, placing us in the action almost instantaneously, with Kwanten’s Wes waking up from a night of heavy drinking in a seemingly abandoned rest-stop bathroom sans pants.

Being titled Glorious and setting itself in a surrounding with a certain aforementioned wall feature is a connection not lost, but fortunately for Wes (or maybe it’s unfortunately) his bathroom buddy isn’t interested in such discreet pleasures.  No, in Wes’s neighbouring stall booms the assured voice of Simmons as a character that introduces himself as Ghatanothoa.  If you’re unfamiliar, Ghatanothoa is a fictional deity in the Cthulhu Mythos, a large, hideous creature that first appeared in early H.P. Lovecraft works, which should hopefully inform you of what type of temperament McKendry’s film – working off a script from Joshua Hull, David Ian McKendry and Todd Rigney – is adhering to.

A conversation ensues between the two, with Ghatanothoa rather insistent that Wes, who is increasingly becoming more and more anxious and eager to leave, stay right where he is.  Due to Wes’s drinking from the night before, it’s entirely possible that he’s in some type of delayed hangover-fuelled hallucinogenic state, and the film likes to toy with the idea that this is all in his head.  But, imagined or not, the authoritative Ghatanothoa cements that Wes will pay attention to what the universe has to offer.

Managing to project philosophical musings in an unpretentious manner, there’s an ease at which Glorious works as a dry comedy, an unhinged horror film, and a contemplative tale all at once; it’s the type of bombastic mix that shouldn’t necessarily work.  Given that Lovecraft’s own works can be quite singular, almost discontented at times, it’s a further testament to McKendry that she frames Glorious in such an affable way.

Glorious is now streaming on Shudder.