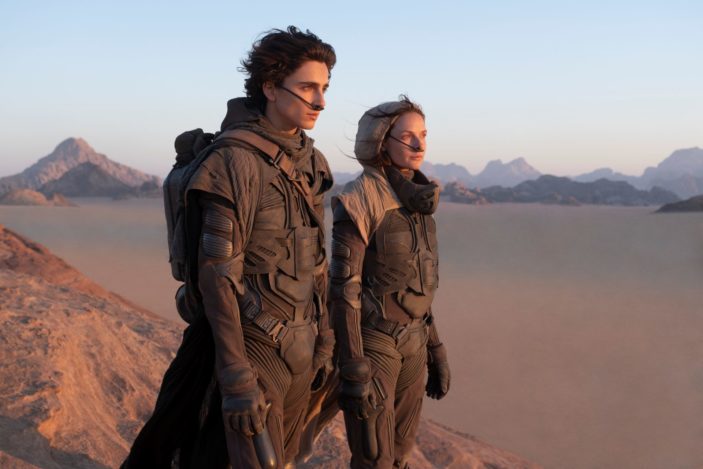 Despite reading Frank Herbert‘s 1965 novel many moons ago and viewing David Lynch’s bizarre 1984 adaptation during my youth, Dune was still a title that felt foreign to me when entering the theatre to bare witness to Denis Villeneuve‘s much-discussed imagining.  Sure, I can clearly see the inspiration this operatic story had on the science-fiction tales that came in the years since – namely a little series known as Star Wars – and the narrative surrounding the spice business at the core of the story lacks subtlety when held up to the petroleum industry of the now, but Villeneuve’s vision, in all its robust glory, is its own beast, and in adapting the novel with his own unique vision he’s made familiar material feel somewhat untapped.

Dune (or Dune: Part One, as it’s so specifically stated during the opening credits) is a film so vast that we are thankful we have a confirmed sequel to look forward to as, perhaps to the frustration of many a viewer, this is a product that very much feels narratively unfinished.  It’s heavy on exposition that in some ways it feels designed as a precursor for a bigger, grander story to be told, one that Villeneuve and co-writers Eric Roth (Forrest Gump, A Star Is Born) and Jon Spaihts (Prometheus, Doctor Strange) consistently tease throughout, with certain influential characters deliberately shadowed; anyone hoping Zendaya will have a constant presence best check their expectations as the starlet’s screen-time barely adds up to 5 minutes in total.

Speaking of Zendaya, her character, Chani, is what seemingly drives the story forward for its protagonist, young Paul Atreides (Timothée Chalamet), the ducal heir of the House Atreides, a royal family of sorts who have taken over ruling duties of Arrakis, a harsh desert planet known for its produce of “spice”, a valuable substance that bestows its users heightened vitality and expanded consciousness.  Under the ruling of his father, the stern Duke Leto Atreides (Oscar Isaac), and his various aides – namely weapons master Gurney (Josh Brolin) and swordmaster Duncan Idaho (Jason Momoa, one of the few actors on hand able to inject a genuine sense of fun into proceedings) – Paul is instructed in the ways of combat and self defence.  At odds with this are the teachings from his mother, Lady Jessica (Rebecca Ferguson, simply luminous), a member of a divine sisterhood whose representatives possess advanced physical and mental abilities, attributes she is sharing with Paul, in spite of the fact that these only be shared with other women.

Holding the power he has honed from his mother’s teachings – specifically something called “the voice”, a vocal tone that manipulates the minds and wills of others – signifies a future of greatness for Paul, and the visions that haunt him throughout, though unclear to him as to what they represent, connects him to the mysterious Chani and a tribe of warriors that will seal his fate; whether that be aligned with his salvation or doom is yet to be determined.  His father’s move to Arrakis indicates Paul’s vision holds weight, and the majority of Dune‘s significant run time – it clocks in around 156 minutes – bases itself around positional politics and a heft of double (and triple) crossing that, if you’re not paying attention, finding a narrative entry point may be a somewhat murky experience.

Thankfully, so much of Dune works purely on an aesthetic level.  Though it’s a particularly muted looking film in terms of colour, it remains no less gorgeous in its visual sumptuousness as to what Villeneuve and cinematographer Greig Fraser (Rogue One, The Batman) create and display on screen, and the performances, though understandably heightened, never indulge in unnecessary melodramatics.  It’s a larger than life film, and though it easily could have rested on spectacle, it manages to have substance in its detailing of tyranny, rebellion, and respecting one’s culture.  A true achievement in every sense of the word.

Dune is screening in Australian theatres from December 2nd, 2021.