Film Review: Almost Love (aka Sell By) overcomes genre unoriginality with a strong ensemble and an honest voice 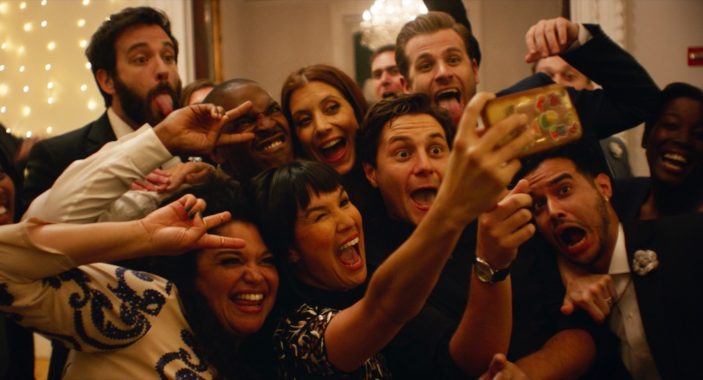 Best not to be fooled by Almost Love‘s incredibly generic title (its alternative UK/international moniker Sell By isn’t much better either) as Mike Doyle‘s interconnected relationship drama plays stronger than it deserves to, thanks in large part to an ensemble cast that are allowed to play to and with their own respective strengths.

Set in the Instagram-ready buroughs of New York City (does it ever not look appealing?) Doyle’s dramedy initially feels like it will detail a story focusing equally on the lives and loves of its central characters.  Adam (Scott Evans, younger brother to Chris if you’re wondering) is a gifted painter, growing more and more frustrated by the day due to his creativity being stifled by the renowned artist (Patricia Clarkson, in a neat cameo) he ghost-paints for.  His vexation only grows more so at home with his boyfriend Marklin (Augustus Prew), a men’s fashion influencer who earns a healthy-enough income to support the both of them.  There’s evident love and passion between them but Adam can’t help but sense Marklin’s attention is elsewhere.

Though the film also devotes its share of minutes to their trio of girlfriends (Kate Walsh, Michelle Buteau, and Zoe Chao) and their respective issues, it becomes evident that this is Adam and Marklin’s story, leaving any of the more situational humour-driven moments to be born from the women’s narrative strands; Walsh’s Elizabeth perhaps matches the drama quota of the boys’ with her 15-year long union to her husband hitting a rough (and potentially unfaithful) patch, but in Buteau’s Cammy and Chao’s Haley, Doyle’s script crackles with the type of levity that is all the more welcome when the film taps rather organically into its depiction of relationship austerity.

When Cammy’s new beau admits he’s homeless, her confusion at her exit strategy and whether or not she can overlook his accommodationally-challenged situation provides Almost Love with a heft of comedic opportunity, most of which comes from the back of forth between herself and Haley, who similarly has her own romantic conundrum with the high-school senior she is tutoring; to say an affair with her student is problematic would be putting it lightly.  The banter between Buteau and Chao is some of Almost Love‘s most enjoyable (and relatable), and their appearances often liven up proceedings to the point that you can’t help but wish the film was truly more an equally dispensed assemble production.

After the film’s admittedly lighter first act, Almost Love gradually darkens as Adam and Marklin’s relationship unfolds, with their respective ownership of property acting as their own metaphorical stance on how they see their dynamic; Adam’s seemingly unwilling to let go of a safety net, whilst Marklin’s ease at purchasing a new abode signifies (perhaps) his comfort in existing independently.  And though the film’s plotting doesn’t make it particularly unique within its genre, Doyle should absolutely be commended for scripting his characters with strokes of realism.  Here, Adam and Marklin are presented as wholly realised men who just happen to be gay.  There’s no overt use of sex to define their relationship, they refrain from stereotypical phrasing, and there’s no perpetuating cliches that one partner has to be considered more dominant and masculine than the other; the fact that both Evans and Prew are gay men in real-life no doubt proves an assistance in their natural performances.

Whilst not the most original film, Almost Love evokes the sense of freshness due to its frank depictions of relationships, both romantic and platonic.  There’s a maturity in Doyle’s approach to communication amongst the characters that lends the film a realism the genre is not always afforded.  A little more levity throughout could’ve really benefitted the film overall, but the strength of the ensemble proves enough for Almost Love to be worthy of your attention.

Almost Love is available on Demand in the United States and UK now (known as Sell By internationally).  An Australian release is still to be determined.