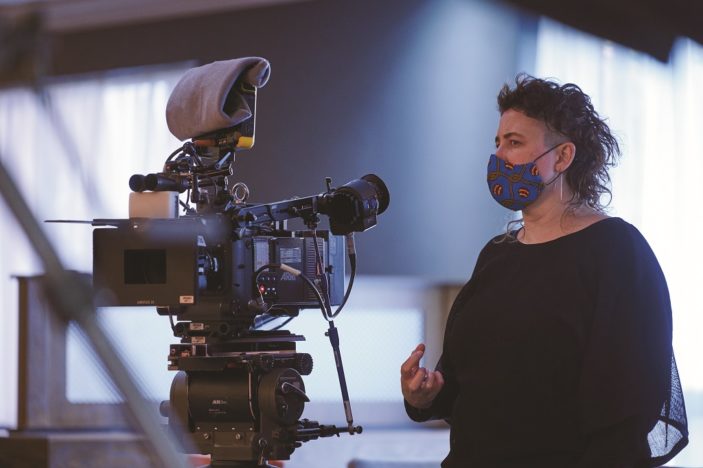 An award-winning director, producer, writer, and founding member of the film collective Closer Productions, Australian filmmaker Sophie Hyde is a force to be reckoned with.  She’s also incredibly delightful, as our own Peter Gray discovered when chatting with her for the forthcoming release of her latest feature, Good Luck To You, Leo Grande.

An intimate comedy about body and sex positivity, the film, detailing a widow’s hiring of a young escort in order to fulfil her sexual desires, is earning acclaim for Hyde’s honesty behind the camera and the stunning lead performances from screen legend Emma Thompson and rising talent Daryl McCormack.

Ahead of its national release (you can read our review here), Peter and Sophie discussed shining a positive light on the sex work industry, casting its two lead performers, and choreographing joy.

Congratulations on the film, first of all.  I was lucky enough to see the film back in January at Sundance, and I knew I was watching something really special that would resonate with audiences.  It was so great to watch the film again in a cinema with an audience.

Oh, thank you.  That’s lovely.  That’s so cool that you saw it at Sundance.

I’m sure the topic of sex and sex positivity and body positivity is one that’s been unavoidable when discussing the film, but is there a certain joy in that discussion because this film is such a beautiful representation of that, as well as bringing a positivity to the sex work industry.

Yeah, that idea of letting go that our bodies are the most important thing about them is something that’s a great topic of conversation for me.  And it’s inherently in the film too, that you can let go of the shame that we’ve been soaked in for so many years and think of our bodies as something other than that.  Think about all the things they do for us.  That’s huge! That shame that’s existed within all our interaction with one another and defined our sexuality and our sexual experiences is an underlining of the movie, for sure.  It’s always nice to talk about that.

You feel like in your life you’ve been talking about these things for years, and certainly when they’re in the film you talk about them more, right?  I think we’ve seen really limited stuff on sex work.  And the experience of talking to sex workers shows that their stories are so much more varied.  There’s so many more experiences there and it’s nice to have someone come at it in a different way.  We see this person who’s just really good at his job and trying hard to be good at his job.

I was going to ask about that, because obviously the sex work industry is one you had to look into.  How did you go about researching it when crafting this film?

There’s some amazing sex worker-led organisations all over the world, and I just approached them because they have great, amazing, articulate people who are ready to talk about this stuff.  We talked to lots of different people.  We had a researcher as well, so we talked to people who weren’t part of those organisations as well.  In Australia I spoke to someone I had worked with on a different project for other stories, and over time we found that people were becoming more significant consultants, who were more aligned with the type of person that (the character of) Leo was, which was really helpful for us.  And we read a lot of books by sex workers to get that first-hand account (perspective) as well.

As a gay man, I thought it was such a lovely inclusion that Leo, himself, doesn’t discriminate on gender.  Aesthetically too, the queer community should probably thank you for casting Daryl McCormack.  What was that process like in finding Leo Grande?

We looked at a lot of great people.  When we met Daryl, as well as just being a great actor and being able to pull it off…oh wow, that sounded so rude (laughs), that was not meant to sound rude (laughs). “Pull off the role”…(laughs). He just had a whole lot of layers that brought real interest to the role as well.  He’s a very tall person.  He has a very strong physicality, which is important as to why Nancy would have chosen him to fulfil that fantasy she was looking for.  But in being that tall, he’s not imposing in any way.  He’s really gentle, and he moves in this almost cat-like way.  He doesn’t stay in that expectation of that “buff, fantasy man”.  To me, that was so important.  He’s also a very generous actor and human, and that became very important.  And I wanted to see a man on screen that was more fluid and had worked on themselves to be good at their job and connecting with people and knowing what they needed.

It’s not as common for sex workers, that are men, to only have sex with women.  We want to maintain that fantasy on screen.  Daryl and I always spoke about that.  That experience (his character) speaks about as a teenager points to him being binary in his sexuality, I would say. 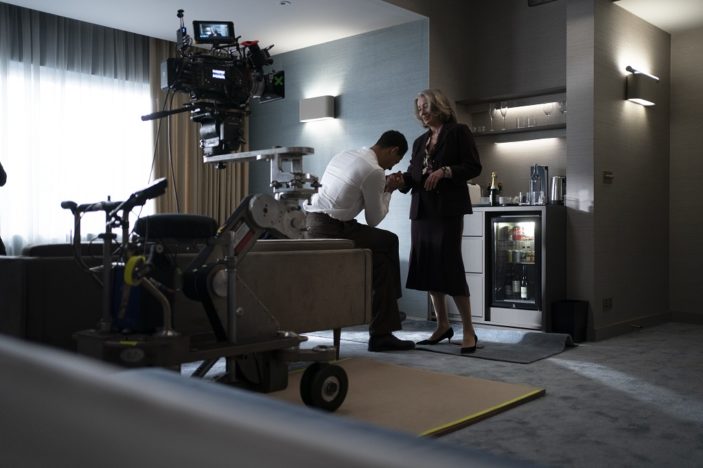 Offsetting that you have Emma Thompson, who is such a formidable force.  Was it much of a process in getting her for the film?

She was already attached before me, actually.  I had to talk to Katy (Brand), the writer, and Debbie (Gray), the producer.  (Emma) had already read Katy’s earlier draft and really understood the character.  Really saw her.  (Nancy) was always just a side character in other films.  She loved that (Nancy) was put centre stage for this.  She really felt it in her bones, this story and this character.  When I came on it was more tackling and uncovering the Leo storyline.  That helped open up the film more.  It originally had a very different ending.  The idea of Nancy was always there (though) and that’s what drew Emma in.  Even reading Katy’s script, you could hear Emma straight away.

The scene of Nancy and Leo dancing together may be one of my favourite sequences of the year.  It’s so joyous, and it got me thinking about the film’s intimacy and if it was always such a singular film in terms of setting, or did COVID shift the way it was presented?

Katy’s script was always set in the hotel room.  We actually opened it up to that final setting downstairs and then following Leo on the street at the beginning of the film.  But it was always designed to be in a hotel room from Katy’s point of view.

The physicality of it was something that was really found in the rehearsal room with Daryl, Emma and I.  We had a movement director, and I find that dancing really joyous as well.  Both of them are fantastic dancers.  I remember when we found that moment.  Showing it to the crew…they were just like “Oh my Gosh!”  There’s just something about it.  It’s so joyful.

Good Luck To You, Leo Grande is screening in Australian theatres from August 18th, 2022.