Film Review: Good Luck To You, Leo Grande is an intelligent and refreshing comedy about the joys of shameless sexual awakenings 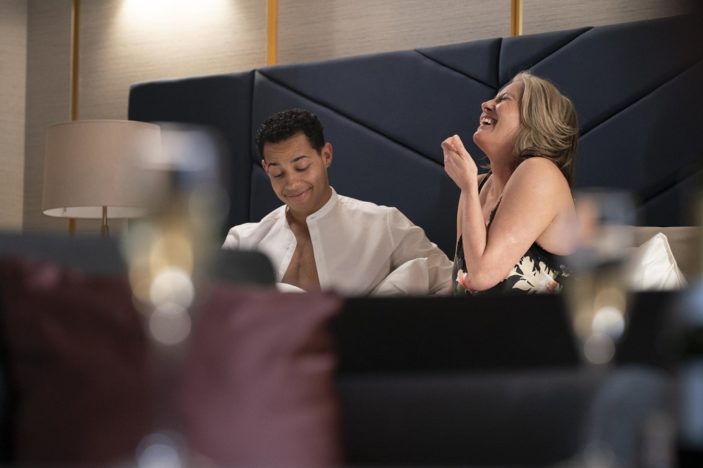 Whilst there’s no surprise revealed in the fact that Emma Thompson truly deserves to be considered one of the greatest living actresses working today, it’s always appreciated when a performance solidifies such a statement.  And in the deliriously charming and strikingly emotional Good Luck To You, Leo Grande, Thompson turns in career-best work that leans into her strength as both an unmatched comedic and dramatic performer.

A COVID production it may so be – with it utilizing a singular location and, for the most part, only two actors – the intimacy that’s practically forced due to such restrictions turns out to be to Leo Grande‘s benefit.  There’s a beautiful and tragic humanistic quality that’s uncovered here, through Sophie Hyde‘s gentle direction, Katy Brand‘s delicate script, and the absolutely stellar performances of both Thompson and Daryl McCormack, an impossibly handsome Irish actor who we can only hope walks away from this film as a bona fide star.

The film’s set up is alarmingly simple, but it’s within that that the swirling ingredients continually enhance the straightforwardness.  Thompson stars as Nancy, a sexually unfulfilled widow, who hires the titular Leo (McCormack, all charm and no body fat), a sex worker with a calming presence, for what she hopes is a night of tender exploration.  Nancy (not her real name, as she later confesses) has only ever been with one man, and having been widowed for the better part of two years she’s hoping Leo (also not his real name) can help kink out her sexual repression.  Nervous and mechanical, Nancy’s years of being a religious education teacher means she has often decried the very notion of the industry Leo has clearly excelled in, and the fact that she now needs him to hopefully help her achieve the orgasm she’s never experienced adds to her wavering enthusiasm.  Leo takes it all his stride as Nancy pushes and pulls against herself, and over the course of their four meetings both will connect on a sexual and intellectual level that neither was expecting from a transactional agreement.

In a time when the studio-driven blockbuster is seemingly the only property that earns any monetary respect, it’s such a joy to see a film like Leo Grande defy the demise of the smaller, adult-aimed genre.  This is an intelligent effort that refreshingly highlights the plight of the middle-aged woman, exploring her psyche, her fears and her sexuality in a candid manner.  Nancy isn’t the punchline.  Her desires aren’t fodder for one-dimensional comedy.  This is genuine exploration, and through Hyde’s direction and in the hands of such a fearless performer as Thompson, Nancy’s want to be a sexual being is never treated as disposable.

As stellar as Thompson is, she’s beautifully matched by the gem that is McCormack.  Aesthetically distracting but delivering an emotionally-charged performance that’s just as richly vulnerable as hers, their chemistry never wavers, even when the film veers in its third act towards a more stirring narrative that I imagine will catch many viewers off guard.

Both a body positive and a sex positive affair, Good Luck To You, Leo Grande strives in its attempt to ultimately be a film that celebrates the act of sex but, more importantly, salutes the ramifications of such.  This is an unadulterated marking of an awakening that belongs to no age or gender, and it’s our luck that such a film as this exists.

Good Luck To You, Leo Grande is screening in Australian theatres from August 18th, 2022.

Good Luck To You, Leo Grande was originally reviewed as part of this year’s Sundance Film Festival coverage.