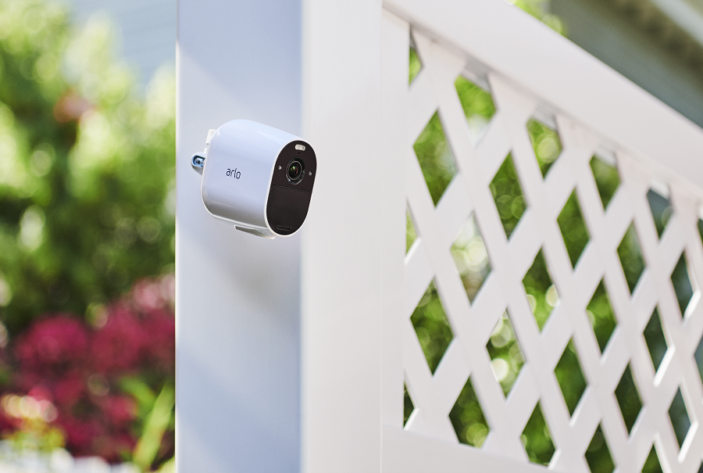 Arlo’s lineup of battery-powered outdoor cameras has been growing nicely as of late, offering up a flexible range that positions the company as one of the frontrunners when it comes to smart home security tech. With their latest, the Essential Spotlight Camera, the team at Arlo have created what is their most affordable entry-level device to date and a necessary step at the inevitable value-focused play this growing sector is seeing.

My favourite Arlo device, the Pro 3, starts at A$419 for a single camera without a SmartHub. So the Essential Spotlight’s price modest price tag of A$229 is already quite attraction. It’s even more affordable than the Arlo Video Doorbell.

The question then is, where are the compromises? In order to slim down the price tag so substantially, there must be more than a few sacrifices, right?

Arlo wouldn’t deviate from its uniformly minimal design, not even for its budget open. The body is glossy white with a black face, the front of which features the camera and, at the very top, dual 850nm LEDs to help record clearer video at night. The idea is essentially a much lighter and less powerful version of Arlo’s superb Floodlight Camera, streamlining to fit budget buyers and those looking to add something inexpensive to their existing security set-up.

With all other wireless Arlo cameras you’d need to simply press a button on the bottom of your camera to remove the battery so you can take it inside and give it a charge. That’s not the same here. Instead, you’ve got a Micro-USD charging port, so when this thing runs out of juice you have to go through the trouble of detaching the camera and taking it inside to charge it. It doesn’t bode well for the battery life, which is promised as 5-6 months, that I’ve already had to charge it up once – I’ve only had it for a month (more on the battery below).

Another important part of the wireless design is that the camera relies solely on your Wi-Fi connection, so there’s no need for an Arlo Smart Hub. Granted, this does lose significant benefits, the main one bring that the Hub typically acts as a very reliable extender for your Wi-Fi signal and allows you to place Arlo cameras further afield. As such, you need to think a bit harder about where you’re positioning the camera and avoid any Wi-Fi dead spots (but you can fix that by grabbing a Mesh system).

The camera comes with an optional stand and all the necessary tools you’d need to install it, which is quick and painless. As usual, the app guides you through the set-up, which is even quicker since there’s no Hub to connect it to. 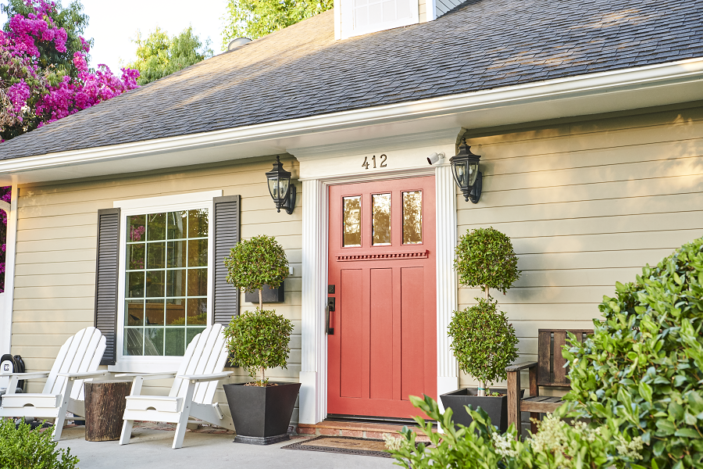 As expected, the camera records video in the slightly less impressive 1080p with a 130-degree field of view. That would be an acceptable sacrifice if the field of view was a bit wider, so do keep that in mind when choosing where to install the camera. Regardless, the video quality is superb during the daytime and intelligible enough to easily monitor what’s going on within the scope.

Although motion blur is quite common if you’re watching live through the app, and although colours are sharp and precise, the edges are annoyingly distorted. There also seems to be a problem when it comes to focusing in on details, so people’s faces can be slightly blurry both on live and on recorded video. This is less of a problem once the person is closer to the camera, which is another thing to keep in mind when choosing the position – if you want this to successfully catch critical motion events, then position the camera where people would need to get up close (eg, above the front door).

Even though the camera has a 12x zoom, anything beyond 4x would just be to lower in quality to be discernible.

Keep in mind that these issues occur during the day, and they are even worse at night. Despite the spotlight, which successfully brightens up the camera’s scope, there’s still an issue with detail on people and objects. Still, the light boosts visibility significantly and the camera has sufficient contrast to record the scene in acceptable clarity.

It would be preferable to have the Essential Spotlight camera as an add-on to an existing system, especially one with a video doorbell, given that near the front door is likely where most people will be placing this budget camera. The main reason for this is to get a better two-way audio experience, because by itself the Essential just doesn’t cut it when it comes to having a chat.

Sound is also an issue when it comes to the siren. While its always a good thing having an in-built siren that you can arm to go off when motion is detected, the buzz itself isn’t nearly loud enough. Although this was a bit of a benefit when it came to testing the camera. I ended up annoying my neighbours a few doors down when testing out the excellent Arlo Ultra. The Essential? Not a peep.

That aforementioned battery drain is concerning, but could have been fixed with better functionality. Although the Arlo app experience is reliably good, if not a bit plain for the Essential, there’s no nuance when it comes to controlling the sensitivity of the motion detector. And I feel this is one of the most important features to have when it comes to security devices. As such, the Essential is either overtriggering or not triggering at all (based on your settings), and the latter can waste battery fast by turning the camera into a panicky, hypervigilant mess.

Although you can control the activity zones for the camera (providing you have an Arlo Smart subscription – it’s cheap and worth it), so this does limit the sensitivity somewhat and can improve battery life.

If the battery is an issue for you, I suggest also grabbing one of Arlo’s separately sold panels. This is pretty much an essential if you’re going to be positioning the camera somewhere that isn’t so easy to reach all the time, limiting the amount of times you’ll need to go through the process of detaching and reattaching the device.

What makes Arlo one of the best options out there is that its agnostic when it comes to the rivalry between Amazon’s Alex and Google Assistant. You can use both, and thankfully the smart experience here works well. This is most valuable when you’ve got a smart display and you simply want to bring up the live feed without pulling out your phone. There’s also compatibility with IFTTT, and syncing security alerts with applets is always fun. Who would want their light when motion is detected? It just makes the entire experience more seamless and…smart.

As of now there’s no HomeKit support, but seeing as Arlo only recently rolled the update out to the Pro 3 cameras, it’d be a surprise if that didn’t change in the next couple of months.

While there are some compromises, the price tag is still attractive enough to pull newcomers into Arlo’s world. It also gives the company a real competitive advantage over rivals, as entry-level cameras aren’t very common yet. Arlo was late to the game when it came to the Video Doorbell, but they’ve wisely chosen to first-step this growing side of smart security tech.

You’re looking at A$229 for one Essential Spotlight camera, which makes the most sense if you’re – as above – adding to an existing set-up. It’s not that the Essential is too weak to stand on its own two feet, but it does lack the strength when it comes to audio and detail, so to properly monitor a house in a high-traffic area, you need some muscle to pick up the slack.

The value then depends all on you. If you’re using the Essential as an entry the Arlo ecosystem, you’re probably better off saving for a bit longer and going for even just one Pro 3 or an Ultra. For what you’d pay for two Essentials, you could just get one Ultra and it’d do a much better job (and you’d get a Smart Home base too).

But if you’re seeking to buff up a system, then the Essential is a very smart choice. Building up a proper security system is typically not very cheap; Arlo just made it cheaper.

Highlights: Though it drops to 1080p, video quality is still sufficient day and night; cost effective add-on to existing Arlo system; smaller in size so more flexible in terms of where it can be placed; easy set-up made even easier without the need of a Hub.
Lowlights: Poor detail means blurry faces from afar; siren is too soft; no nuance when it comes to motion alerts, hence battery drain; no removeable battery; 2-way audio performance very poor; limited in how far away from Wi-Fi router you can place it.
Manufacturer:
Price: A$229 (for one); A$429 (for two)
Available: Now