Arlo Ultra Review: Is the DIY smart home complete without a security set up?

Curating a DIY smart home is now easier, more accessible, and actually financially viable for the average consumer. As such, we’re beginning to see a lot of advanced smart security systems on the market. Google have their Nest range, for example, and then there’s Arlo, which has arguably become the more dominant surveillance solution. 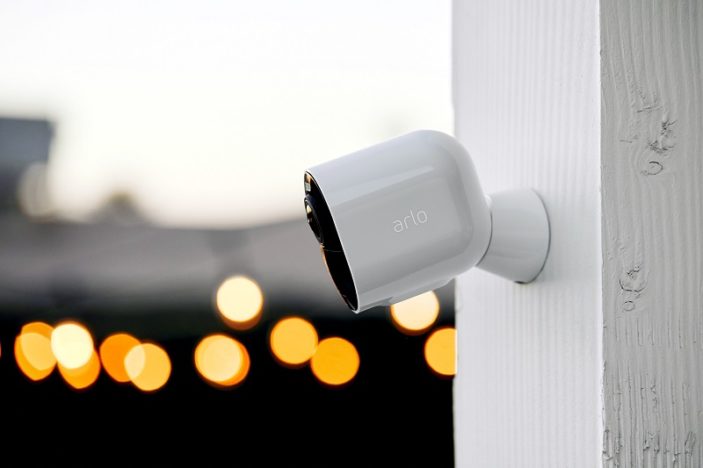 I had heard fantastic things about the reliability and ease of use with Arlo. And given the area I’m living in experiencing a very unusual (seriously, unusual) increase in break-ins, and Christmas fast approaching, jumped at the opportunity to play around with the Arlo Ultra. The advanced camera was released earlier this year before the more recent Arlo Pro 3 camera, and has several visual refinements over the Arlo Pro 2.

The wireless weatherproof device has ushered a new era of home security cameras thanks to the ability to stream and record video in true 4K or UHD. This of course means a pretty hefty asking price, but one that’s met with a number of convenient features that make monitoring the home much more effortless than it was before.

We’re talking automatic zooming, motion tracking, colour night vision, instant connectivity with emergency services, and a wide field of view that scans up to 180 degrees. There’s also an integrated spotlight and siren, which makes this the powerhouse security system that 10 years ago wouldn’t have been possible with such a petite camera.

Sure, so many features seems a bit like overkill for a single house tucked away on the backstreets of a relatively quiet neighbourhood. But the Arlo Ultra is one of those things you don’t think you’ll need, until you – unfortunately – need it.

Even if it’s just using the scarily accurate motion sensors to illuminate dark patches at the front of the house when you’re trying to do something at night (like taking out the trash or, if you’re so inclined, a spot of late-night gardening), having this patrolling your yard like an always-on smart companion can make everyday life that much more efficient.

Fly on the Wall 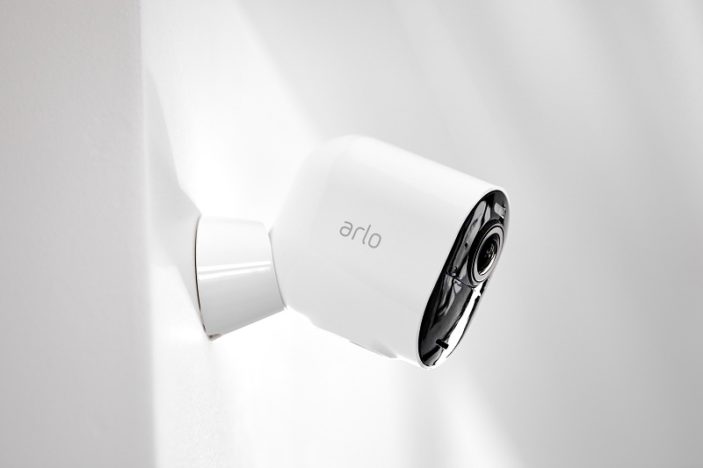 Out-of-box the attractive black-and-white Arlo Ultra comes with a few things that it needs to get to work. This includes the essential SmartHub base station which acts as the wireless heart of the camera. Also included is a battery pack, a USB charger and charging cable, and easy-to-use mounting hardware. The Ultra has a size advantage over the Arlo Pro 2, at 3.5x2x3 but still fits snugly on any surface without looking intrusive. Other than that, it’s slim and attractive design is pretty much the same as previous models.

The rechargeable battery pack that keeps this camera going is rated for three to six months depending on usage, after which it requires around 4 hours to fully change using a USB and magnetic cable. A single screw can be found on the back for an easy mount, if for whatever reason you aren’t able to screw the magnetic mount to a surface instead.

Speaking of the magnetic mount, I love how it can attach the camera in a variety of positions, which certainly gives you plenty of options when it comes to angles and getting the exact perspective you want.

HDR combined with an 8MP 4K sensor results in incredibly clear and detailed streams and recordings, in 4K (3840×2160) as well. Although enabling 4K recording seems to negate motion-tracking and auto-zoom functions, which are far more important if you want this camera to be as useful as it can be. In that case, you’ll be settling for 1080p, which isn’t much of a downgrade.

The wide 180-degree field of view and 12x zoom complements this for an accurate picture of whatever is being monitored, with very little that can hide from this thing as long as its in the camera’s scope.

Noise-cancelling microphones are included with a front-facing speaker for clear two-way audio and sound detection, delivering high quality audio which I found to be consistent coming from both an iPhone 8 and a Google Pixel 4.

In terms of motion detection, you’re looking at a range of 150 degrees thanks to two motion sensors that quickly and consistently can notify the companion app when triggered. It can also send an e-mail, start recording video and self-upload to the cloud or a microSD card.

If you don’t want to use the spotlight to track motion or shoot full-colour at night, you can just program the camera to use its two infrared LEDs, which give the recordings black-and-white night vision for something a bit less noticeable.

A built-in siren can be quite loud at 80dB, which is more than enough to alert neighbours. 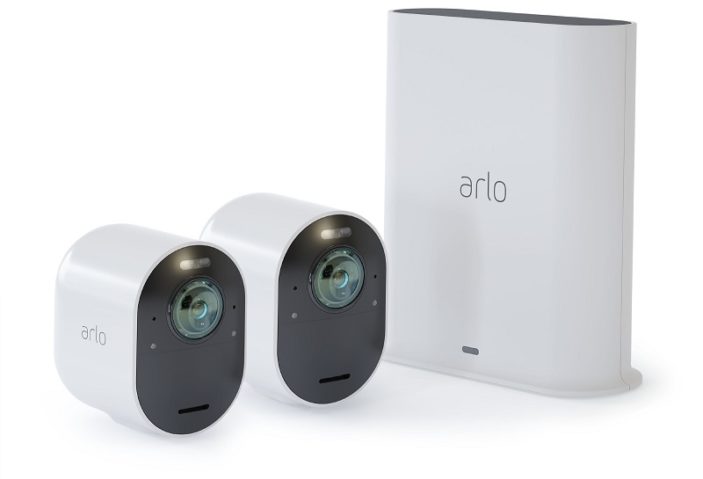 If you want to use an older base station with the Ultra, you’re out of luck. Instead, you’ll need the SmartHub which comes with the device. Besides, you can still connect any older models to this new and more refined hub, which measures in at only 6×5.5×2 inches. That’s big enough to fit in Wi-Fi, Bluetooth, ArloRF, Zigbee and Z-Wave to get the most use out of the Arlo as well as ready it for refinements.

Design wise, it’s a simple hub, with an LED indicator on the front which turns blue when everything is connected correctly (solid amber when there’s an error; blinking amber when facing a lost connection). On the back is the LAN port, reset and sync buttons, and a power jack.

The smartphone app has been through a number of refinements and is intuitive enough to quickly respond to any alerts. All Arlo devices connected to the hub are displayed under “Devices”, distinguished by a thumbnail showing recent activity. Launching a live stream is simply a matter of tapping a play button.

While streaming, there are numerous buttons at the bottom which signal different functions to the camera, including muting the speaker, connecting to the microphone for two-way talk, recording video, toggling the spotlight, and taking a quick snapshot of whatever is on the screen. Settings allows you to check the battery level of the device and also adjust motion sensitivity, brightness, 4K functionality, auto-zoom and motion tracking, and switching between super wide, wide, of full video mode. You can also quickly trigger the siren to scare away would-be intruders.

Perhaps most telling of just how much thought has gone into the app is the nuanced audio settings, where you can toggle the microphone, adjust speaker volume, and even reduce wind noise to focus in on something. On my test, the background noise was noticeably reduced, allowing me a more detailed audio profile of what was going on (which was mostly nothing but birds chirping).

If you’ve signed up for Arlo’s Smart Premier plan, in addition to more cloud storage, you’d also have an icon in the app for notifying authorities or a friend in the event that you’ve spotted something concerning on the stream. It’s near the library button, which is where any recorded videos are stored with time stamps.

Note that you’re only really looking at additional costs if you want to make full use of the 4K streaming and recording capabilities, which for most people really wouldn’t be an issue. Otherwise, it’s perfectly fine to use this without signing up for any ongoing costs – which is what I’d recommend if you want to feel like you’ve got the most value out of this without committing to anything further.

Like most tech nowadays, you’re able to build up a steady ecosystem of Arlo security products to build upon just the dual cameras that ship as the Arlo Ultra. Most obvious is the Arlo Chime and Arlo Doorbell combination which work in tandem to monitor your front door and also offer a bunch of great features that can be used outside of just security.

This is most useful when having packages delivered or guests rocking up announced, with an instant field of view and open dialogue between your device and the door. The Arlo Doorbell calls you almost immediately – a few seconds delay between button press and alert – when someone presses it, allowing you to bring up visuals of who it is, and speak to them quite clearly.

My favourite feature was the ability to just have a pre-recorded message play when someone pressed the doorbell, or prompt them to simply leave their own message which I could access via my device. No longer did I have to actually worry about missing a delivery, or getting one of those dreaded “we missed you” cards that then required me to make the time to go to the local post office.

I imagine the only improvement that will be needed in future iterations of the doorbell, in particular, is the ability to actually get a visual of the person at the door before you answer. There’s also the odd white noise that the doorbell emits while someone is recording their message (after you’ve rejected their ‘call’), which may be slightly confusing to whoever is at the door.

Do You Need It?

If you’re in need of a smart security camera to track your home, there is really no looking past this one. Years of refining the Arlo product has led to a true powerhouse that does just about everything you would reasonably expect from a vigilant security camera, and does it very well.

I had no hiccups from mounting this system (2 cameras, 1 doorbell) in front of the house to monitoring it from another state. While – thankfully – no events occurred where I would actually have needed the siren (I tested it once for volume, a neighbour shouted at me), and I’ve had no reason to alert authorities, it’s comforting to know that both can be done immediately if I got a worrying push notification.

Highlights: Sharp visuals steamed seamlessly to any device; incredibly easy to set up; strong battery life; responsive to subtle movements; able to see clearly in the dark; can be fixed in various positions.
Lowlights: Still quite expensive; minor delay between doorbell and alert; doorbell doesn’t show you who is calling before you answer.
Manufacturer: Arlo
Price: $449 for 1x, $1049 for 2x, and $1399 for 3x cameras (2x and 3x come with SmartHub); $129 for Arlo Doorbell; $99 for Arlo Chime (based on JB Hi-Fi prices)
Available: Now

Review based on Arlo Ultra unit supplied by Arlo.