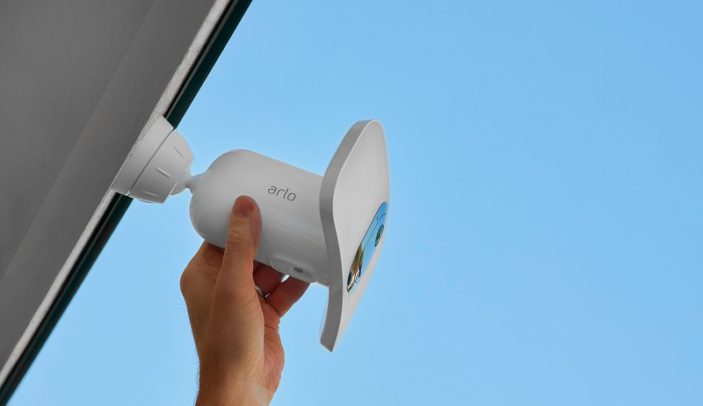 Wires suck. That seems to be the consensus when it comes to smart home devices nowadays, and whenever a wireless option drops it is instantly more attractive than the opposite. Requiring wires was one of the few issues I had with the recently launched Arlo Video Doorbell, which is otherwise an exceptional part of the company’s smart security ecosystem. Thankfully, it’s not a concern with the Arlo Pro 3 Floodlight camera.

Arlo is reliable when it comes to presenting security devices with excellent build, solid performance, and meaningful features. The company often quashes this good will by making you pay a monthly subscription fee if you want to maximise your use, but for the most part, value is caked-in. That hasn’t changed at all with the Arlo Pro 3 Floodlight, in fact, it may be the company’s best offering yet. 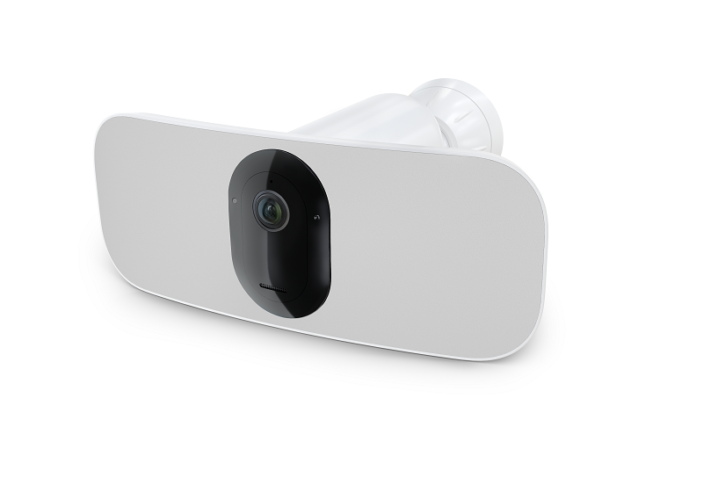 Though Arlo was late to market with their video doorbell, they’ve jumped the gun when it comes to the Pro 3 Floodlight. It’s the first wire-free 2K floodlight camera available, edging out competitors for those who have a real need for a solid camera with significantly more powerful onboard LED lighting than what you’d already get from previous models.

And that’s what this is. It is very much just a sleek looking white-black Arlo Pro 3 surrounded by a very bright floodlight panel rated at 2,000-3,000 lumens. That’s far brighter than your standard lightbulb, emitting a powerful 4000k (which is on the warmer side) white light capable of illuminating more than just the immediate area.

This light can also be easily adjusted via the app, which is often necessary since max brightness can be glaring. How the light functions and for how long can be customised as well, choosing from a solid or pulsating brightness ranging from 1 minute to 20 minutes.

You’d preferably want to place this centrally rather than at any one sides, allowing the camera to brighten up more space. From a protection point of view, that’s more than enough to rob an intruder of their precious shadow-cover, and brighten things up enough for more detailed and vivid visuals at night.

Keep your expectations closer to 2,000 lumens though, if you want this to remain a Wi-Fi-only camera with no wires. If you want 3,000, you’d need an outdoor cable (sold separately), which Arlo also sell.

Needless to say, this also means that when you test out the light during set-up you’d want to be a fair distance from the camera, and you’d ideally install it above eye-level. Because it’s wireless, you have the freedom to install it wherever you want as well, which is an enormous benefit over other floodlight cameras on the market, which all require wiring.

It’s easy to fit this onto just about any surface as well, given the LED panel that stretches around the central all-black camera is thin and the mount if flexible enough to angle the camera however you want it. 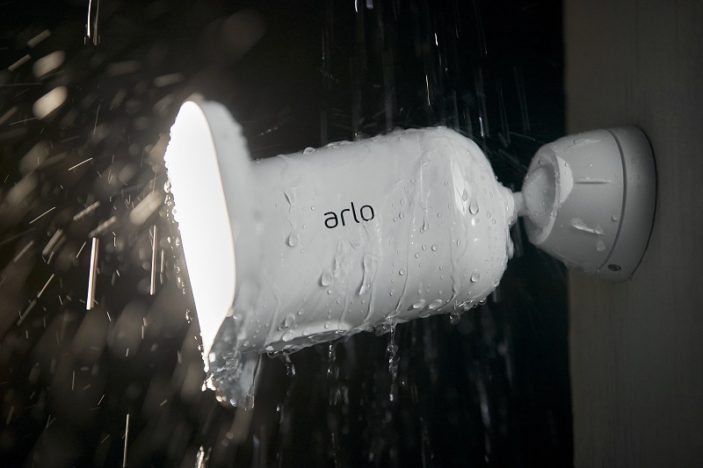 The camera is IP65 rated, so will be able to withstand pretty much all conditions that’d hit the average household. That’s the same as the Pro 3, so it’s safe to have expected this in the first place. The floodlight is, after all, a camera you’re only really going to want to use outdoor. Indoor use is kind of defeating the purpose.

Perhaps one of the most notable features of the floodlight camera is that it can work in the absence of an Arlo hub. I already have a hub since I have Pro 3 and Ultra cameras set up, but for anyone not already in the company’s ecosystem, this makes the floodlight the best entry point yet. 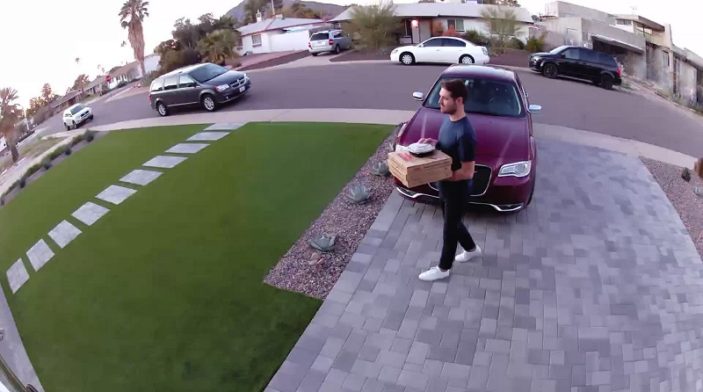 Streaming is identical to the Arlo Pro 3, which we reviewed here, but unsurprisingly its much easier to get better quality at night, assuming the light has been triggered or you have manually turned it on via the app.

And that’s really where this camera outperforms the others in the Arlo range. While the Pro 3 has an integrated light of up to 1000 lumens, the floodlight is able to significantly temper itself to capture sharp, detailed footage.

The camera streams and records in 2K HDR with a resolution of 2560×1440. This is more than enough to get a good picture of anything in that 160 degree field of view. Using the 12X digital zoom can of course drop that quality significantly, but it’s still clear enough to easily discern passing objects.

As with past cameras, you can use the app to set activity zones for the camera to focus on – particularly valuable if you have other Arlo cameras patrolling elsewhere. And like the others, this works exceptionally well, with it being easy to set up zones in which the camera will immediately track motion, auto-zoom and flick on the light. 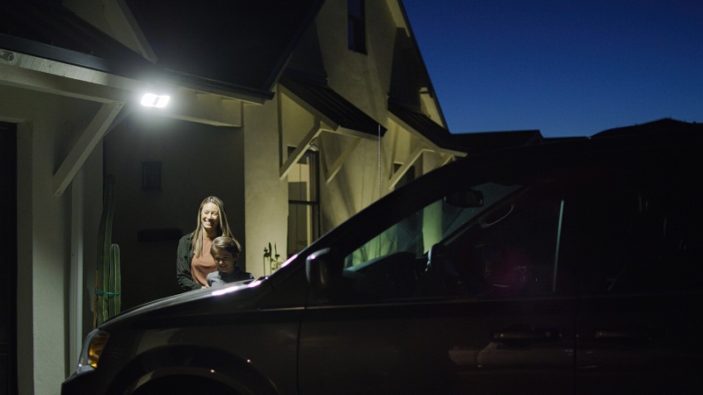 In terms of battery, you’ve got an XL version (3.6V/47.19Whr) of the same juicer found in the Pro 3, and that one reliably runs for roughly 6 months on just one full charge. I haven’t had the floodlight long enough to say anything beyond that, but I’d be very surprised if it doesn’t easily reach the same amount of months. And when you do need to charge it, it’ll take around 6.5 hours to reach full charge; 5 if you’ve gone for an optional dual charger.

For audio, a speaker is included for two-way audio and sound detection. If you want to trigger the onboard siren, expect it to get as loud as 80dB which will definitely finish the job if any intruder hasn’t already been scattered by the light.

If you’ve gone for a smart security system, changes are you already frequently use Alex or Google Assistant. It works with both, which also means you’ve got IFTTT compatibility so if you’ve got something like a Philips Hue lighting system, you can sync the two. It is quite magical watching multicoloured lights spring to life when the camera detects motion.

As for that aforementioned subscription service; you’re going to want to sign up to Arlo Smart if you want to milk all the features out of this camera. Although it isn’t too necessary for your everyday household. The camera does come with a free three-month trail, so you’re good to go with features like the ability to distinguish between people, animals, vehicles and packages, as well as cloud-storage for recorded video. 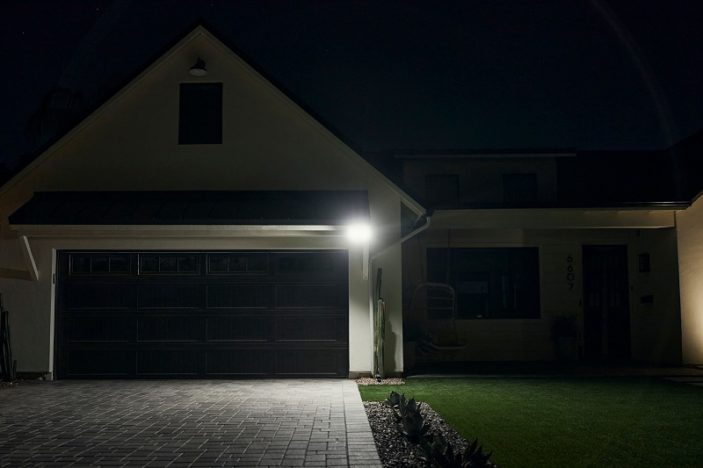 The Arlo Pro 3 Floodlight is only slightly more expensive than the Arlo Pro 3. It could easily have been priced higher as well, seeing as the effective lighting panel adds meaningful performance boosts that are worth far more than the $40 difference. Foremost is the ability to get vivid details on night recordings, which is when security cameras are usually most needed. The fact that the light can get so bright is also an added bonus simply for taking out the trash or scaring away the less committed intruder simply by taking the cover of darkness away from them.

If you’re in the market for a security camera, there are very few options topping this super-alert, wire-free floodlight monitor.

Highlights: First wire-free option on the market; only a slight price bump on the Pro 3; excellent detail and clarity at night; as sensitive as you want it to be; can light up an area beyond where its positioned; easy to install, without the need for a hub; seamless streaming to your smart device; works well with IFTTT.
Lowlights: Would need to pay an ongoing cost to maximum usage; two-way audio is clear, but could be stronger; loses too much clarity at max zoom.
Manufacturer: Arlo
Price: $449 (comes with three months of Arlo Smart)
Available: Now

Review based on a unit supplied by Arlo.