Assuming you have enough disposable income left over after building up the modern DIY smart home, security should be the next consideration. We’ve already seen what Arlo are capable of when they play around in their ultra premium security space. Now that they’ve steadily built up a rich ecosystem of devices, it’s time they finesse their strengths with the Arlo Pro 3.

The camera, only slightly less expensive than the slightly more powerful Arlo Ultra, flexes a considerable amount of intelligence to refine and rethink the smart security experience. Where Arlo Ultra took a shot at UHD supremacy and impressive wide angles, the Pro 3 focuses on a delicate balance between feature-rich 2k monitoring and a reasonable price point. It’s arguably the better choice for those already locked into the Arlo ecosystem, with the Pro 3 easier to add onto any existing SmartHub than the Ultra.

Arlo aren’t changing up anything in terms of design here. It’s still the same basic black on white scheme, with a similar size of 3.5 x 2.0 x 3.0 inches. That makes it the same size as the Ultra, bulky but not overly so.

It’s easy to pick apart the camera and replace the rechargeable battery every couple of months, and mounting is incredibly easy with a hole on the back of the camera to fit onto a screw-in mounting bracket or click onto an magnetic mount securely. Simplicity is one of this brand’s strengths, wisely acknowledging the biggest barrier to setting up and maintaining a security system: effort.

Although some may feel like they’re missing out on the coveted 4K streaming of the Arlo Ultra, the Pro 3 makes a strong case of why the best isn’t really the best. The camera uses a 4MP sensor and HDR tech to grab video at a 2K resolution of 2560×1440. That’s impressive enough, but then you add on the 12x digital zoom and 160-degree field of view and it becomes pretty much all you’d need to monitor a home, whether it’s indoors or outdoors, clearly, precisely and closely. Note that this resolution dips to 1080p when you enable motion tracking, which sets the vigilant camera into watchdog mode where it can automatically zoom in when motion is detected within whatever area you set up.

Although I didn’t really have much going on out the front of my house, on a quiet street in western Sydney, I did manage to pick up on how alert the 130-degree motion detection actually is, without being annoyingly oversensitive. 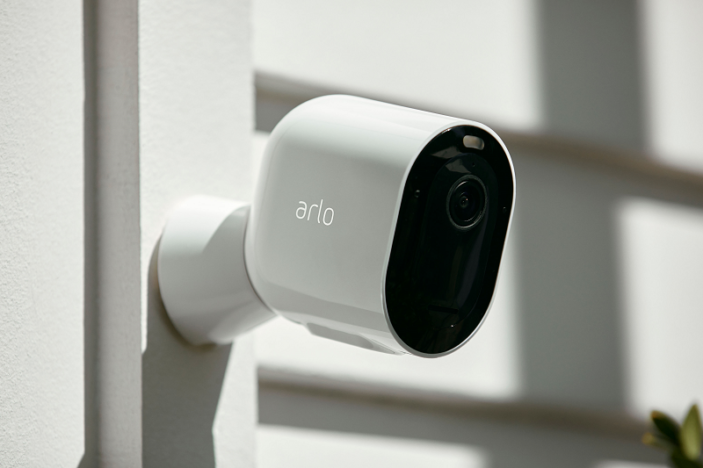 A very precise motion-activated spotlight has been included along with two infrared LEDs so maintaining the same quality at night really isn’t a problem. It sits alongside an 80db siren, which is a vast improvement over the Pro 2 seeing as the siren was built-in the hub – a device that would sit indoors. You want a siren on the camera so it could be more audible to potential intruders, so that feature carried from Ultra is very welcome. A speaker array is included for clear two-way audio and sound detection.

Aside from a slightly narrower field of view and a USB port instead or a MicroSD slot, there really isn’t all much difference between the Ultra and the Pro 3. The Ultra makes small additions to up convenience, but other than that Arlo have pretty much just recreated the Ultra at approximately $100 less. The most meaningful difference is perhaps that with the Ultra customers get one year of Arlo’s Smart Premier plan for free, and Pro 3 users only get three months.

Much like I wrote in the Ultra review, you don’t really need to get onto the Smart Premier plan anyway, unless you want to milk everything you can from your security system. This includes automatic alerts to the local authorities (via the Arlo app), smart notifications intelligent enough to distinguish what triggers a motion alert (like a cat or a human), and the ability to set helpful custom activity zones so the Arlo mostly ignores anything outside those boundaries and focuses on exactly the spot you want it to. The plan also gets you varying amounts of cloud storage for all the videos, which is largely unnecessary unless you’re a business or a homeowner with a ridiculous amount of activity outside (like if you’re facing onto a busy street).

You’ll mostly be streaming the feed from your Arlo app, which is intuitive and well-organised with smart storage for video footage. Although the camera also works on with Alex and Google Assistants (Siri coming soon, apparently), so if you have a smart display that uses those you can also see what’s going on wherever you’ve placed this camera.

2K HDR videos looks very sharp and colour-accurate (during the daytime) on both the Huawei P30 Pro, an iPhone 8. At night, the quality obviously dims a bit but there is still a good amount of colour and enough clarity to see all activity within range. The dip to 1080p when you turn auto-zoom and motion tracking on is noticeable, blunting some of the clarity which makes far away things a bit harder to see.

In terms of alerts, they are immediate and consistently accurate. Any sound or motion event will automatically trigger your device(s) and respond to any instruction. Opening up a two-way dialogue works well with the camera’s speakers, with conversations clear and accurate in real-time.

Arlo’s Ultra itself was just about the best thing the company could produce right now, and lived up to its rather high price tag. The major downsides from the set-up I currently have usually have to do with the doorbell and chime, which could be improved. So where does the Arlo Pro 3 fit in?

The system already works fine enough, but the Pro 3 is mostly valuable for those who don’t want to fork out for the Ultra, and who already have a set-up of Pro 2’s that could use an upgrade. And these are meaningful, substantial upgrades we’re talking about, with the leap from the Pro 2 to the Pro 3 big enough to justify the switch.

Now, if only Arlo could rush out a better doorbell and chime, and find a way to offer the same features as this Pro 3 in a less expensive model.

Although it is expensive to upgrade. If you’re looking at somewhere usually cost effective like JB HiFi you’ll be able to pick up a single Arlo 3 camera (without the SmartHub) for $419. There are also packs of 2, 3 and 4, but all of them are substantially more expensive (up to $1669) as they come with a SmartHub as well.

Highlights: Sharp details and precise streaming; no delay between event and alert; excellent two-way audio; motion tracking is precise but not overly sensitive; ability to discriminate between subjects works well; built-in siren and spotlight; easy to set up or add to existing system.
Lowlights: Still pretty expensive; requires a subscription for full use; dips in quality when motion-tracking; ability to set activity zones only available if you pay extra.
Manufacturer: Arlo
Price: From $419
Available: Now