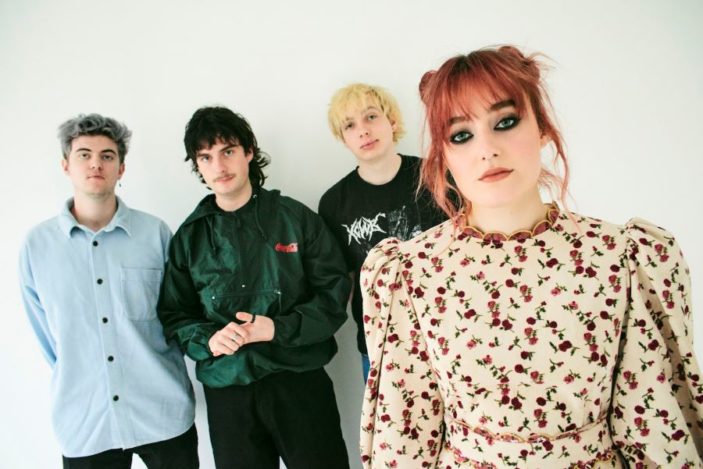 NewDad, the indie rockers from Galway in Ireland, have just dropped Banshee, their latest EP. This follows on from their debut EP, Waves, which dropped last year. The band may only be relatively young, but they are one of those acts with a bullet against their name, with a speedy trajectory in store for them.

The four-piece is comprised of Julie Dawson, Sean O’Dowd, Fiachra Parslow and Áindle O’Beirn.  At five tracks long, Banshee is all class. With beautiful vocals, sweet melodic guitars and a rocking beat, there is palpable excitement bubbling away listening to this record. It grabs you on the first listen and will have you quickly playing this on repeat. It doesn’t take long to see why there is such a buzz about the band.

About the EP, the band writes “This EP is definitely bigger, having more time in the studio definitely meant we got to experiment more and layer more into each track so there’s an overall bigger sound! The main themes of this EP are restlessness and anxiety, during lockdown that’s how myself and most people were feeling so that’s what inspired a lot of the writing”

When lockdown hit in Ireland, the band moved into a share-house together, This allowed them to continue writing and recording. It’s paid off in spades, with the creation of Banshee, and lining up a trip to the USA for SXSW.

Banshee was recorded and co-produced in Belfast with Chris W Ryan and was mixed by the legendary John Congleton (Lana Del Rey, Phoebe Bridgers).

Do give it a listen. Here’s hoping we find them touring in Australia soon.

To celebrate the release of Banshee, the band has put together a playlist of essential Irish indie tracks. Not only are there some great tracks here, but some stellar bands to be discovered. They have sent me down a beautiful rabbit hole here.

One of my favourite Irish bands, the song has so much energy and I love the lyrics

Such a beautiful song, the lyrics are amazing too

Pink and Blue  “The Magazine Club”

Such a beautiful ethereal track it’s also so catchy.

Garden couch is a gorgeous song by fellow Galway musician Jossle. It’s an immediate earworm and an absolute tune!

Summer Nights is another one of those songs that is immediately catchy and although it’s a new song I feel like I’ve been listening to it for years. With very nice vibes and beautiful vocals this song is guaranteed to make you feel good 🙂

Followed Kynsy for a while, but when this came out, I had it on repeat. It’s so much fun and so catchy and has a great video to with it. There’s so much charisma and attitude in the performance, definitely one to listen to.

A classic Irish Indie band who unfortunately aren’t around anymore. One I always listened to in the car on the way to school. I always loved how they used the synth to fill the space of a guitar, to tie in with the bass and drums. The vocals are so insanely good. MayKay, the lead singer, can go between the softest of touches to giving it absolutely everything and this song just leaves you feeling complete.

One of my new favourite Irish bands. Got to see them recently at a small gig in Galway. They’re like Pavement meets The Strokes. Witty and cool lyrics with charismatic performances and riffing guitars.

One of my all-time favourite songs. It’s pretty much everything I look for in a band’s sound and a standout track on the phenomenal Wednesday album by Just Mustard

A subtle masterpiece. Guaranteed to be remembered as a classic in years to come.

No extraneous details to the composition and an arrangement that works wholeheartedly to support the comforting, familiar lyrics and melody of Grian Chatten’s prose.