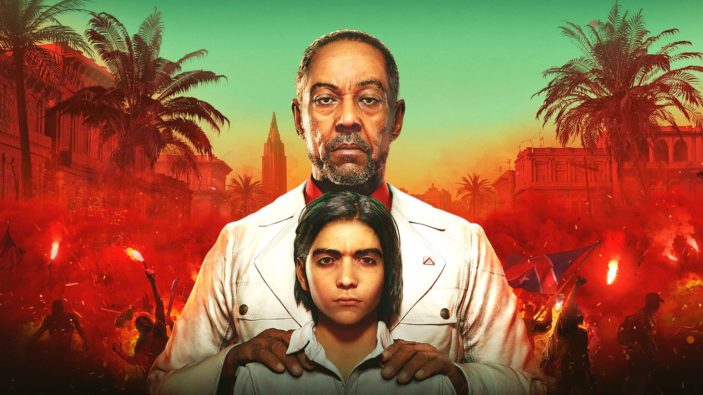 The Far Cry series has faltered over the past few years. Recent iterations were either lacking immersive worlds, memorable villains, innovative gameplay, or all three. While far from terrible, it’s clear that nothing has been as good as the darling that is Far Cry 3. And it seems as though Ubisoft has heard. Far Cry 6 is without a doubt the best the franchise has been in years, complete with a memorable villain and outright expansions of both its gameplay mechanics and vibrant open world. The wheel hasn’t necessarily been reinvented just yet, but it’s hard to complain when revolution feels this good.

Far Cry 6 takes place in the fictional Cuban island of Yara, ruled by feared Dictator Antón Castillo. Brilliantly portrayed by Breaking Bad and The Mandalorian actor Giancarlo Esposito, Castillo himself is one of the most memorable and well acted villains in the entire Far Cry series. Menacing and deliberate, each of Castillo’s lines are delivered with such tone and power, that it’s hard to not only fear him, but easy to understand exactly why the island of Yara has succumb to his rule for so long. Persuasive and intelligent, he lacks the over-the-top insanity of Vaas from Far Cry 3, but succeeds in creating a villain just as dangerous, while maintaining fresh approach. I’d be lying if I said his presence was thinly dispersed throughout earlier parts of the narrative, but it’s hard to complain when the second half of the campaign highlights Castillo with numerous monologues and outbursts.

layers assume the role of Dani Rojas, a young ex-guerilla fighter, not only looking for a way out of town, but a way to end Yara’s revolution and overthrow Castillo for good. A simplistic back story does initially take the wind out of Dani’s sails, but the choice to choose between playing as a male and female version of Dani makes all the difference. I intentionally played through the first mission twice, as male and female Dani, and while voice actor Sean ray’s performance as male Dani is serviceable, Nisa Gunduz steals the show as the female interpretation of Dani. 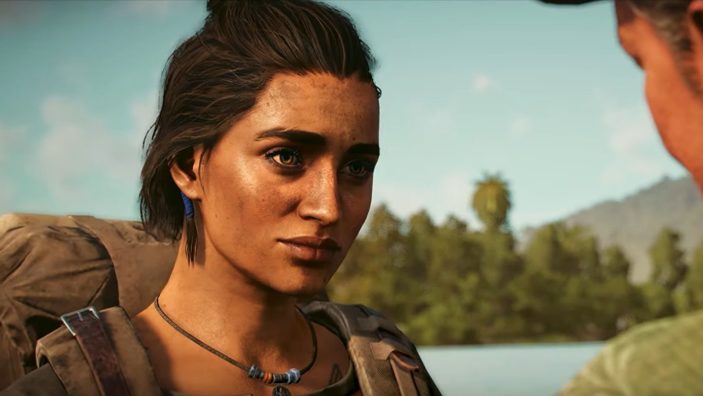 The decision to include third-person cutscenes also helps tremendously in creating a fleshed out character that we can lend our emotions to as a true protagonist, rather than intentionally limiting the traits of a protagonist, simply because they are supposed to represent you. The only issue with that is you don’t exist in this world. Ironically enough, creating a believable character actually drew me in that more more. Who would have thought.

The only issue I have with the narrative itself is the fact that its more nuanced and pressing issues are often lost between the ability to tell a serious story, all while not taking itself too seriously. While certain side characters are charming and believable, they often laugh and shrug off otherwise traumatic events that lose their effectiveness when played for laughs. Slavery, trafficking, drug running and communism are all relevant and accessible themes within the narrative, but Far Cry 6 tends to back away when things get a little too heavy. While it’s less of a criticism and more of a nitpick, the potential to tell a more sombre story is there, but it feels like the narrative struggles with picking sides.

They Took It, We Take It Back

From the get-go, you’ll spend the 30 or so hour story as you may have spent it in previous Far Cry titles. Taking out and reclaiming enemy camps and compounds is common, but interlaced with emotional interactions frequently enough that the story feels like it has meaning. Thanks to a wide range of unique, comical and light-hearted supporting characters, Far Cry 6 understands is blockbuster nature, opting for well acted cutscenes to provide context, even if the gameplay steers towards a familiar sense of rhythm and variety.

This isn’t necessarily a bad thing. Although Far Cry 6’s mission structure has been done before, it’s a pleasure to play through. Functional and depth highlight gunplay and customisation in ways the series has not yet explored, implementing upgrade systems for both weapons and gear, akin to recent and neighbouring Assassin’s Creed games. Gunplay feels incredibly satisfying thanks to tight controls and a variety of weapons and tools. Collecting scraps and materials allow you to craft, upgrade and add attachments and improve the overall effectiveness of your weapon is satisfying and deep, thanks to the sheer variety of weapons at your disposal. 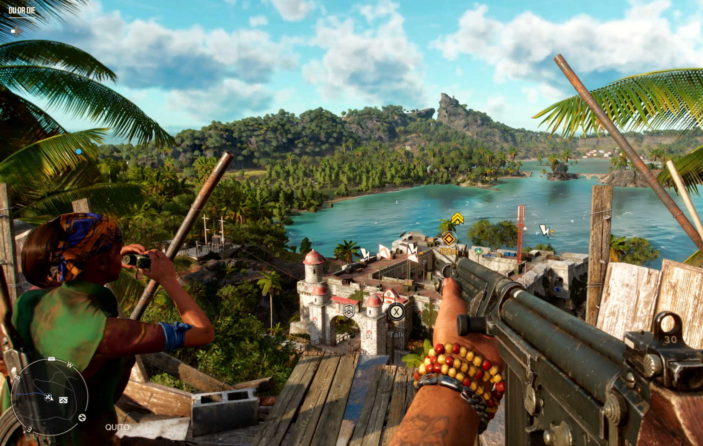 Unfortunately, you customisable gear lacks the same effectiveness, instead opting for minor perks and tendencies that rarely effect gameplay. If you’re good with the gun, you’ll barely notice the effectiveness of gear. Mods can be unlocked for both weapons and gear, but having to shift these around to outfits and load-outs of choice and depending on the situation can get a little tiresome, especially since the tedious nature of pausing the game, un-equipping a mod, selecting a new item and equipping it there, plays out as tediously as it reads.

Supremos however, give into the absurd nature of combat in Far Cry 6. What is essentially a special move in the shape of a fancy, rocket-launcher backpack provides a variety of ways to wreak havoc. Allies also range from cute to cutest, from the t-shirt wearing alligator Guapo, to the adorable wheelchair bound sausage dog Chorizo. The allies can be assigned to attack certain enemies, or simply follow you on your journeys. Vehicles are also customisable, from bull bars and paint jobs, to dash board accessories.

The ability to call your vehicles is also easily accessible thanks to the ability to call them from your weapon wheel. You’ll never struggle traverse your surroundings, as cars, bikes, helicopters, planes and horse all provide you with fun and unique ways to strut about Yara. Dani can also upgrade local camps in certain ways depending on your play style. Camps can be upgraded to provide you with better weapons, more competent allies and interesting gear. 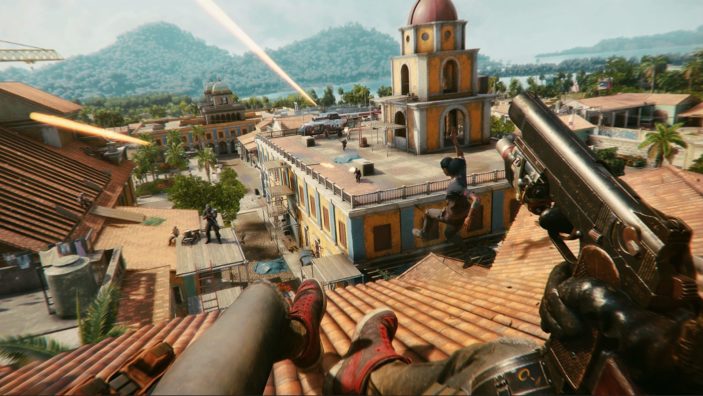 The Good, The Bad… The Cockfighting?

While Far Cry 6 has an incredible amount of fun telling its story and strengthening its gameplay mechanics, it’s not without its flaws. The absurdity doesn’t always land, and this is no more evident than the cockfighting mini-game that plays out like an arena-based fighter. I understand the line between funny and offensive is incredibly thin, but animal abuse is always tough to stomach in games for me, particularly such a niche and controversial sport such as this. It’s admittedly amusing to experience for the first time, but given the mini-game allows you to collect and fight roosters, just felt a little wrong in the long run.

Visually, Far Cry 6 is incredibly competent, showcasing some impressive lighting effects and visuals on next generation consoles. Unfortunately, I did experience the odd screen tear and frame-rate drop, particularly in tricky situations, but for the most part, it was forgivable.

Overall, Far Cry 6 is the best the franchise has been in years. Thanks to a memorable villain in Antón Castillo and a brilliant performance from Giancarlo Esposito, the narrative packs in a credible threat and simplistic premise. While some of the more serious themes and moments are often glanced over, I can appreciate them for at least being mentioned. Gameplay is also varied and competent, thanks to deep weapon customisation and selection. While the broader mission structure and open world remain in-trend with previous Far Cry titles the world of Yara is dense, colourful and wide. If you’ve never been a fan of the series, now might be the perfect time to jump in. But if, like me, your favourite entry is Far Cry 3, you’ll feel right at home in Ubisoft’s latest outing.