The sounds of silence: The wisdom of New Zealand-based POW Studios and how they enhanced the horror of Coming Home in the Dark 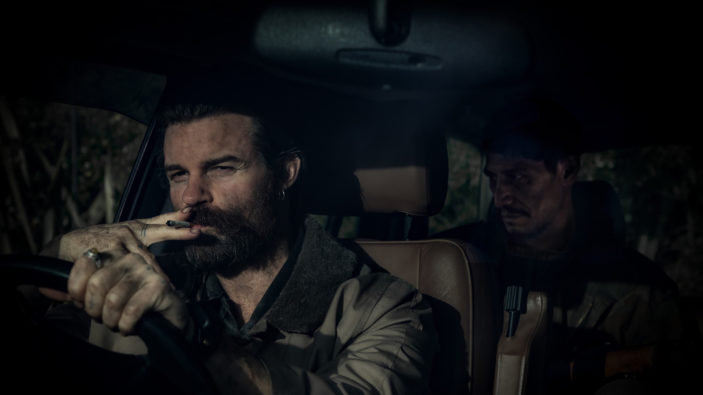 When New Zealand-made horror film Coming Home in the Dark premiered at Sundance earlier this year, its use of sound was perhaps its most deceptive feature.  Forgoing the usual jump scare queues and obvious musical encouragement to goad audiences into a reaction, the film opted for a more subtle approach, utilising naturalistic sounds to give a heightened premise a more organic feel, essentially placing its audience in the thick of terror.

Not noticing the sounds encompassing the film is a testament to the design team in charge.  The cocking of a gun, the gravel under someones foot, the bell chime of a convenience store entrance – that last example being one the film utilises especially well – all sounds often taken for granted in the grand scheme of a film’s running time.

Often the unsung heroes of film, the sound design team have a more influential presence on a production than most people realise. The particular team behind Coming Home in the Dark’s masterful vibrations is POW Studios, a production studio located in the heart of Wellington, New Zealand, where their collaborative efforts have bolstered such film productions as King Kong, District 9, What We Do In The Shadows, and The Lord of the Rings.

Whilst big budget efforts no doubt prove interesting, POW CEO John McKay, Creative Director Matt Lambourn, and Foley Artist Carrie McLaughlin – who were discussing the intricacies of Coming Home… off its Sundance screening – noted that it’s the smaller films that provide the real excitement within the realms of their professions; the smaller the set and budget, the bigger the creative challenge and reward.

A company born from their desire to create a platform as a collective unit, rather than seeking projects individually, POW are looking towards the new age of New Zealand filmmaking, a boom movement that McKay himself has been championing following the initial interest that spurred from the success of Peter Jackson’s Lord of the Rings.

As someone who loves all aspects of films, it was quite the joyous experience for myself personally to learn further details about the industry.  McLaughlin herself was more than gracious to unspool the role of a foley artist and what exactly goes into providing sound for a film, though, as she readily admits, her role as a foley artist came about by accident, simply being asked by a colleague’s father to assist in a project where she was tasked with essentially being the sound double for the actor on screen; “Influencing the actor with sound”, as she noted.

As the dialogue and larger-than-life sounds are picked up by the sound editors, McLaughlin prides herself in being the one on set who captures the more subtle noises; the lightest of sounds coming from the movement of a piece of clothing or, as she so enthusiastically reminisces, the crunching of the snow underneath the feet of Josh Hartnett, Melissa George, and Danny Houston in 30 Days of Night, a title that she evidently holds close to her heart.

Noting their love of horror films, Coming Home… leaned into that mentality of creating tension, making silence essentially it’s own character as we witness Erik Thomson’s resilient victim attempt to survive the psychotic clutches of Daniel Gillies’ imposing executioner.  And whilst cinematography and direction can be attributed to the tautness the film provides, McKay – who’s been in the industry for close to 50 years now – delights in the fact that it’s his studio’s work that is truly behind the reason why the film is as tense as it is.  Silence, as Lambourn would state, is the best compliment one could give pertaining to Coming Home…, bringing out the realisation that the lack of a musical score might suggest silence, but it’s the tiniest, organic noises that accompany the frame that are elevating the discomfort audiences will be experiencing; “Sound design is manipulative”.

Very much adhering to the fact that music and dialogue alone are not enough to construct the world of film, discussing the intricacies with the POW team only further reiterated how much effort goes into a production beyond the aesthetics that are more easily accessible to our immediate senses.  There’s a subconscious factor that we, as audiences, take for granted when watching films.  The taking away of atmospheric noises – the passing cars and crowd noise of a busy street or the rustling of trees in an open forest – would place an unnatural stamp on proceedings, even if we wouldn’t be able to pinpoint just why such a void would be so noticeable.

Though still very much a visual medium, sound and all that it encompasses is crucial.  An additive that should work with the visuals instead of against, sound design is very much the unspoken champion of film, with POW Studios creating a personality for themselves where they exist in a select pocket where both exaggerated budgets and narratives dwell alongside the smaller, more intimate productions that deserve just as much care and attention.

Coming Home in the Dark was originally reviewed as part of our Sundance Film Festival coverage.