Sundance Film Festival Review: Pleasure is a deliberately uncomfortable navigation of the boundaries of the sex industry 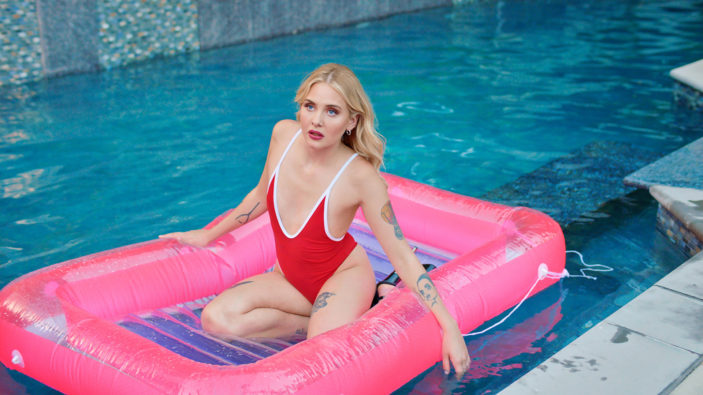 After introducing itself as a film that promises there’ll be no sugarcoating its subject matter – the first thing we hear are the audible moans and verbal berating from a pornographic film, and the first thing we see is the extremely graphic imagery of a young girl’s privates in the shower – Ninja Thyberg‘s confronting Pleasure maintains a level of deliberate discomfort as it navigates the sex industry with an honest eye.

An agent and a safe haven follow – she shacks up with a trio of other industry actresses – and though her fresh, near-untouched image is what some companies want – she states in an interview that she prefers, among other things, only two person scenes and nothing rough – she knows that in order to move up the ranks in the manner in which she desires, she’ll have to step outside of her comfort zone.  And as much as she states her willingness to do so, it’s clear that she never entirely embraces the boundary-pushing settings that come with such sexual endeavours, leaving the film an incredibly difficult, almost brutal film to endure.

It goes without saying that the porn shoots depicted here are graphic, and not just due to the extensive nudity (both men and women are equally rendered throughout), but the feeling of uncertainty that comes with Bella’s issues to what she will and won’t submit to.  Thyberg’s script, co-written with Peter Modestij, is surprisingly colourful when it looks at the shades of the industry and how Bella is treated.  One sequence where her character is bound and gagged is a set comprised largely of women.  They discuss safe words with her and if it’s okay to call her degrading names.  Ultimately, it’s an environment of positive empowerment.  Another, arguably the scene that will push the limits of its audience’s tolerance for torture, shifts dramatically between her co-stars’ behaviour as performers and as people.  It’s a sequence that’s undeniably disturbing, but it’s effectiveness can’t be challenged either, and if there’s any moment that will generate conversation pertaining to consent and what constitutes sexual assault in the realms of “film work”, it’s this one.

Pleasure is screening as part of this year’s Sundance Film Festival, which is being presented virtually between January 28th and February 3rd, 2021.  For more information head to the official Sundance page.